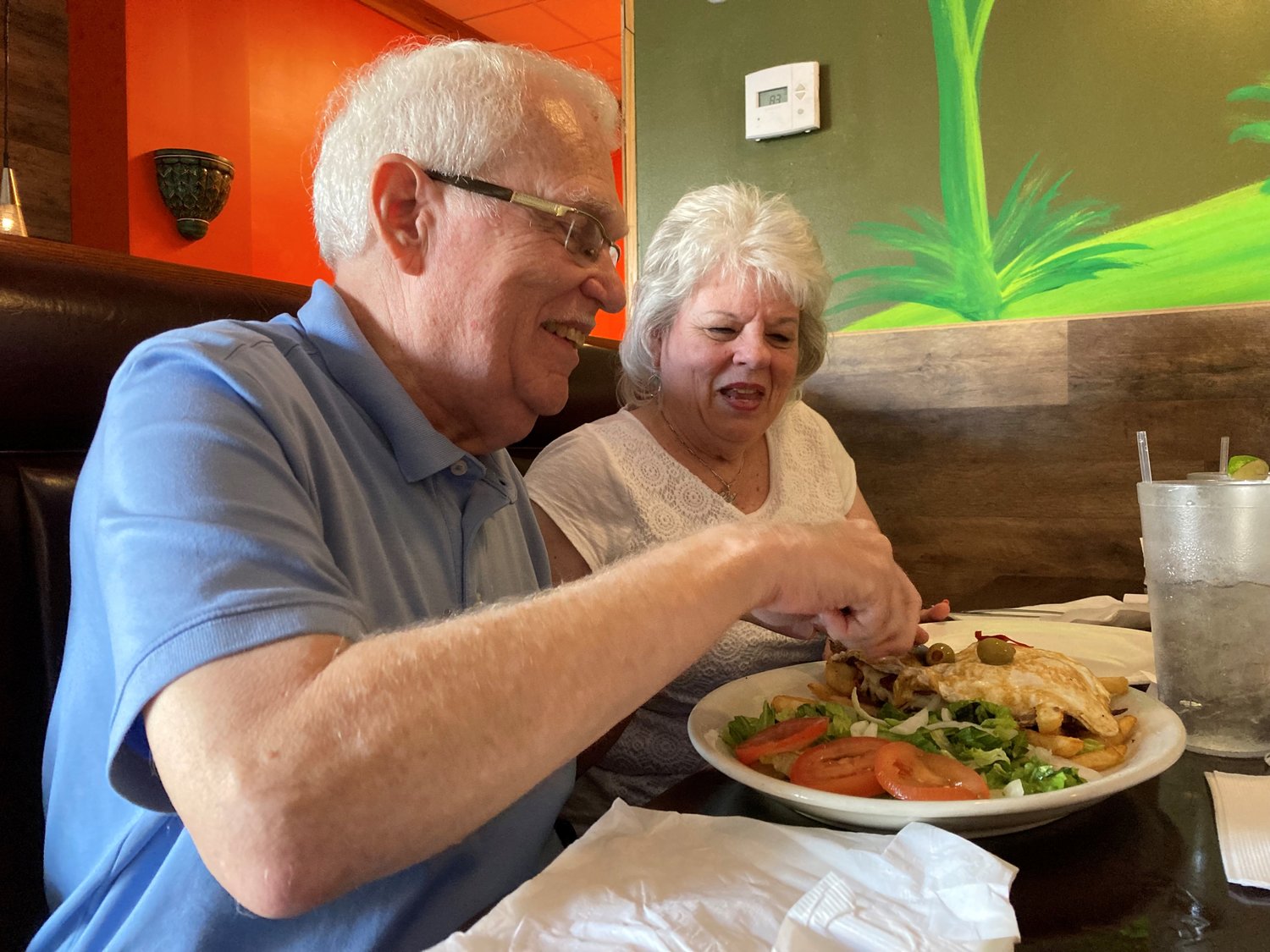 Former international missionaries to Uruguay enjoy chivito al plato at Sabor Latino restaurant in Athens, Ga. The Florida couple were in Athens for a reunion with other retired missionaies. (Christian Index/Roger Alford) 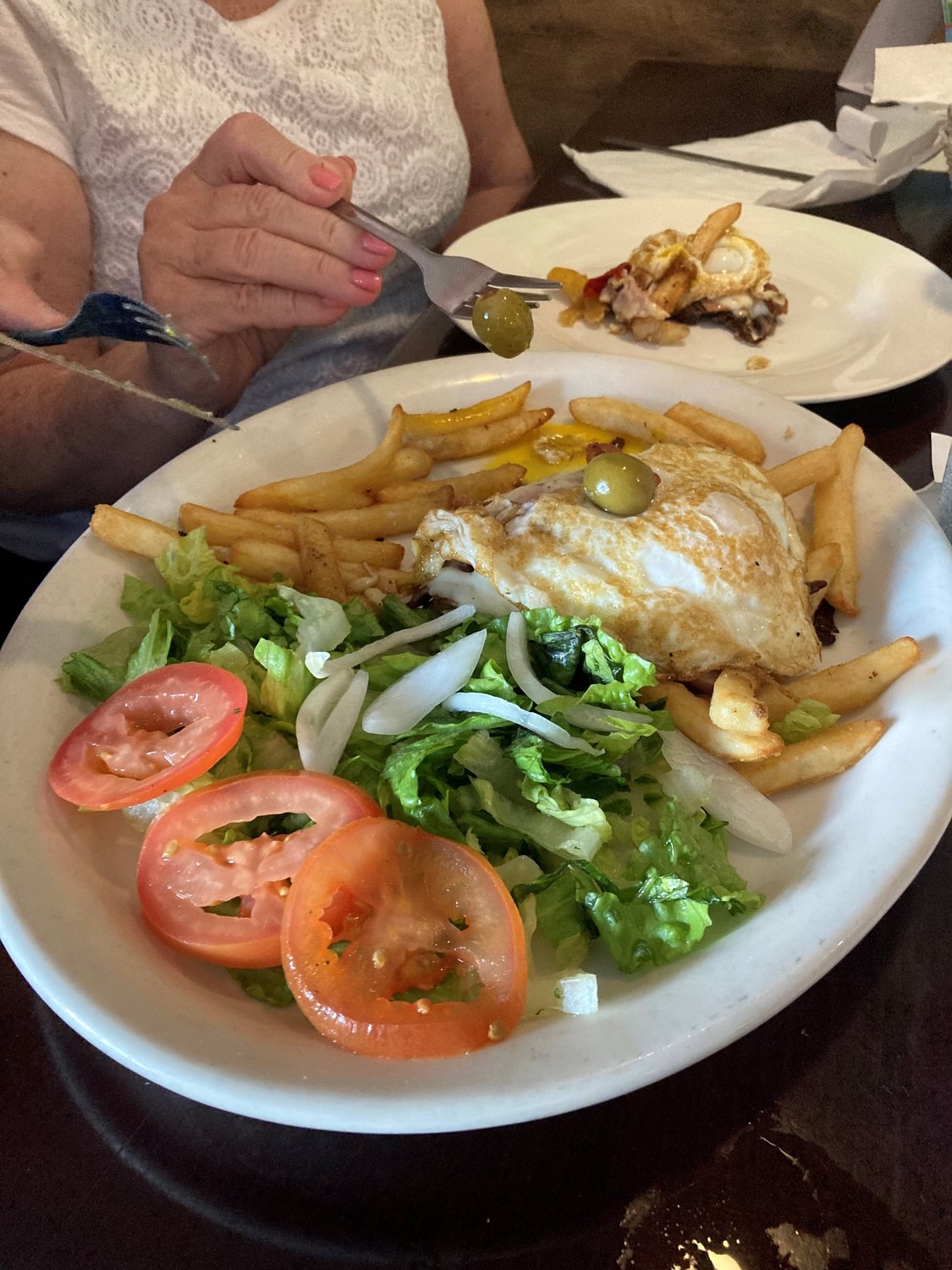 Chivito al plato was one of the dishes a group of retired missionaries to Uruguay ate Theusday evening. (Christian Index/Roger Alford) 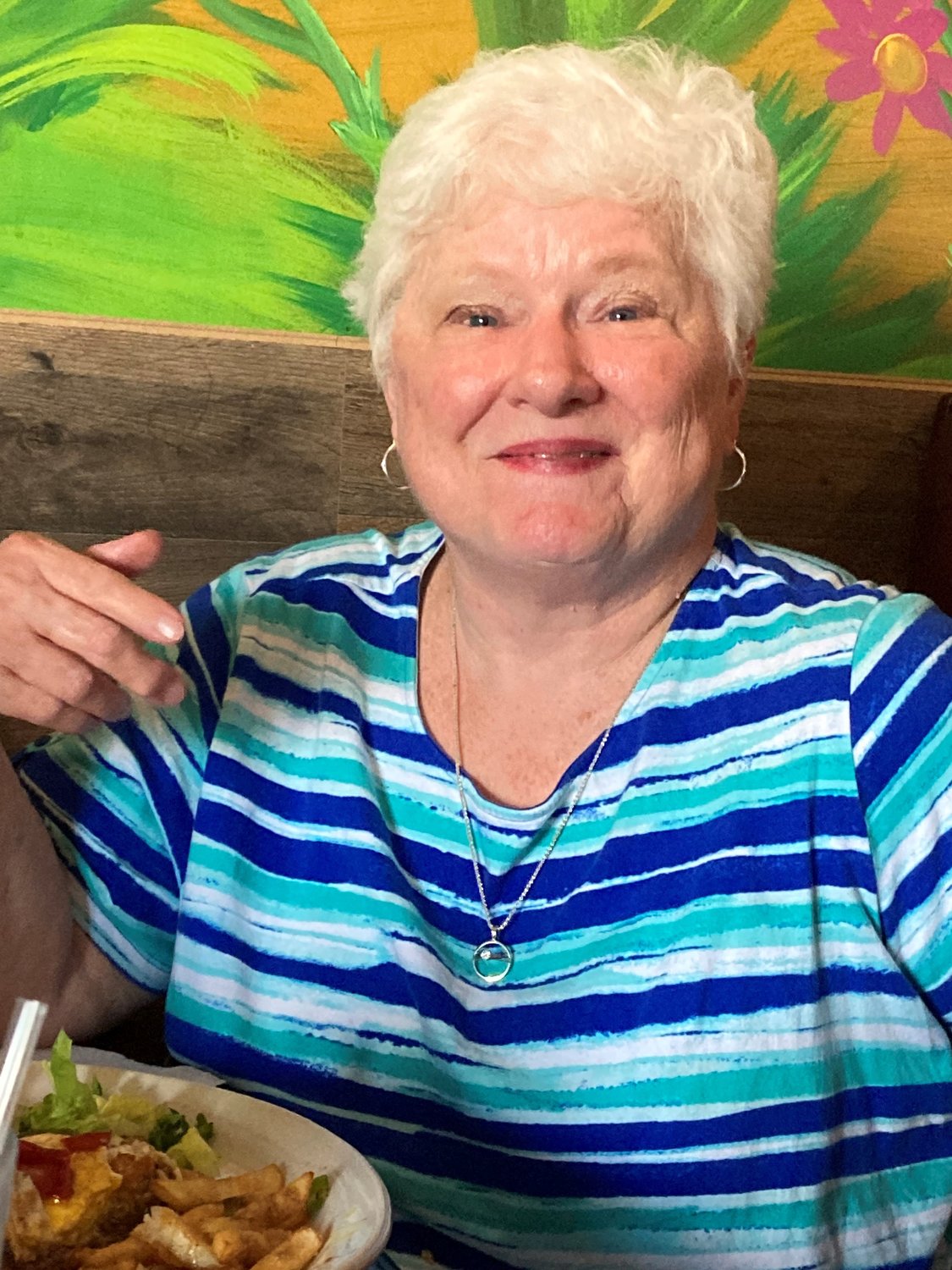 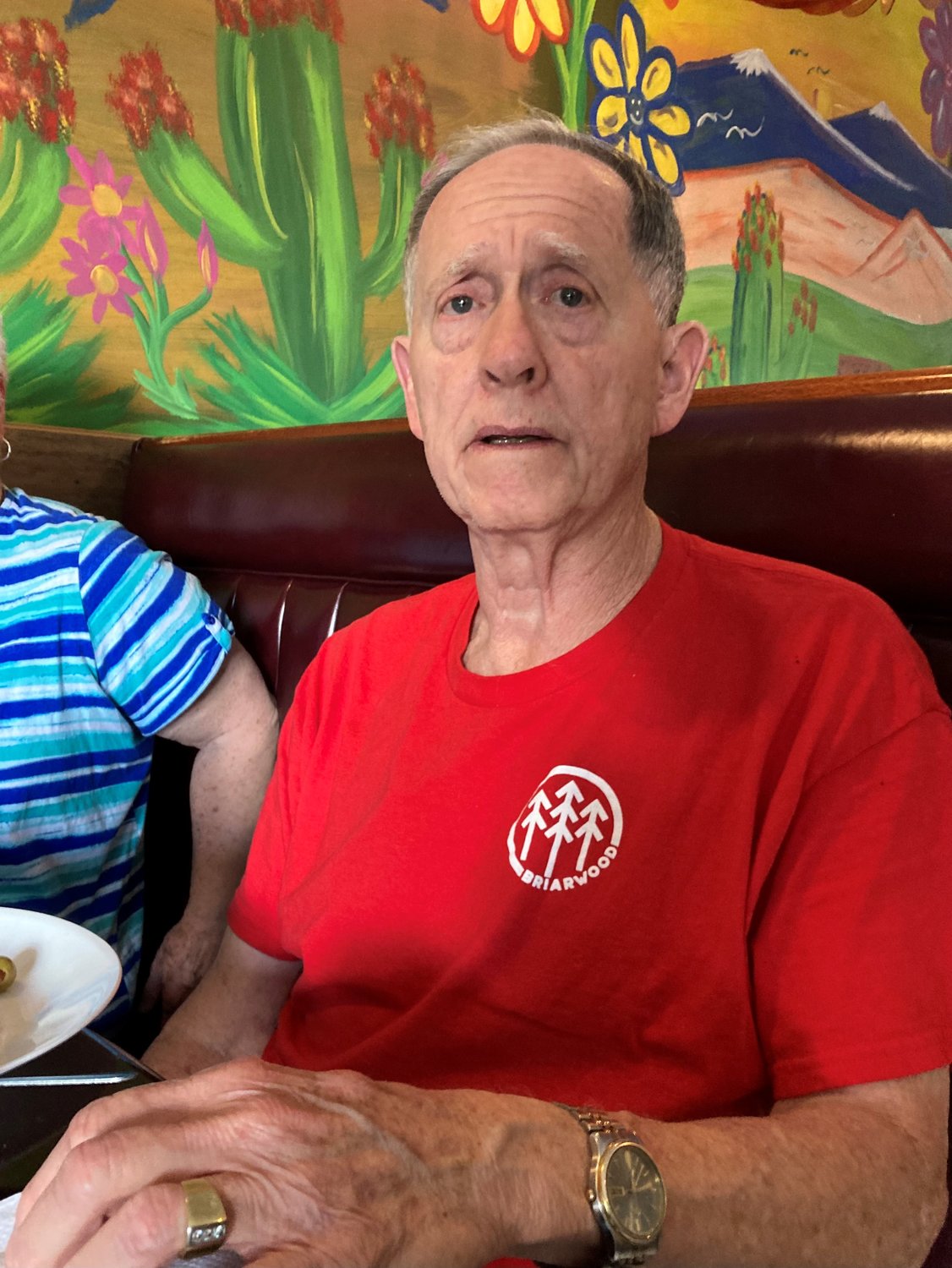 Joe Benfield of Athens, Ga., talks about life in Uruguay when he and his wife, Jeanie, served there as IMB missionaries. (Christian Index/Roger Alford) 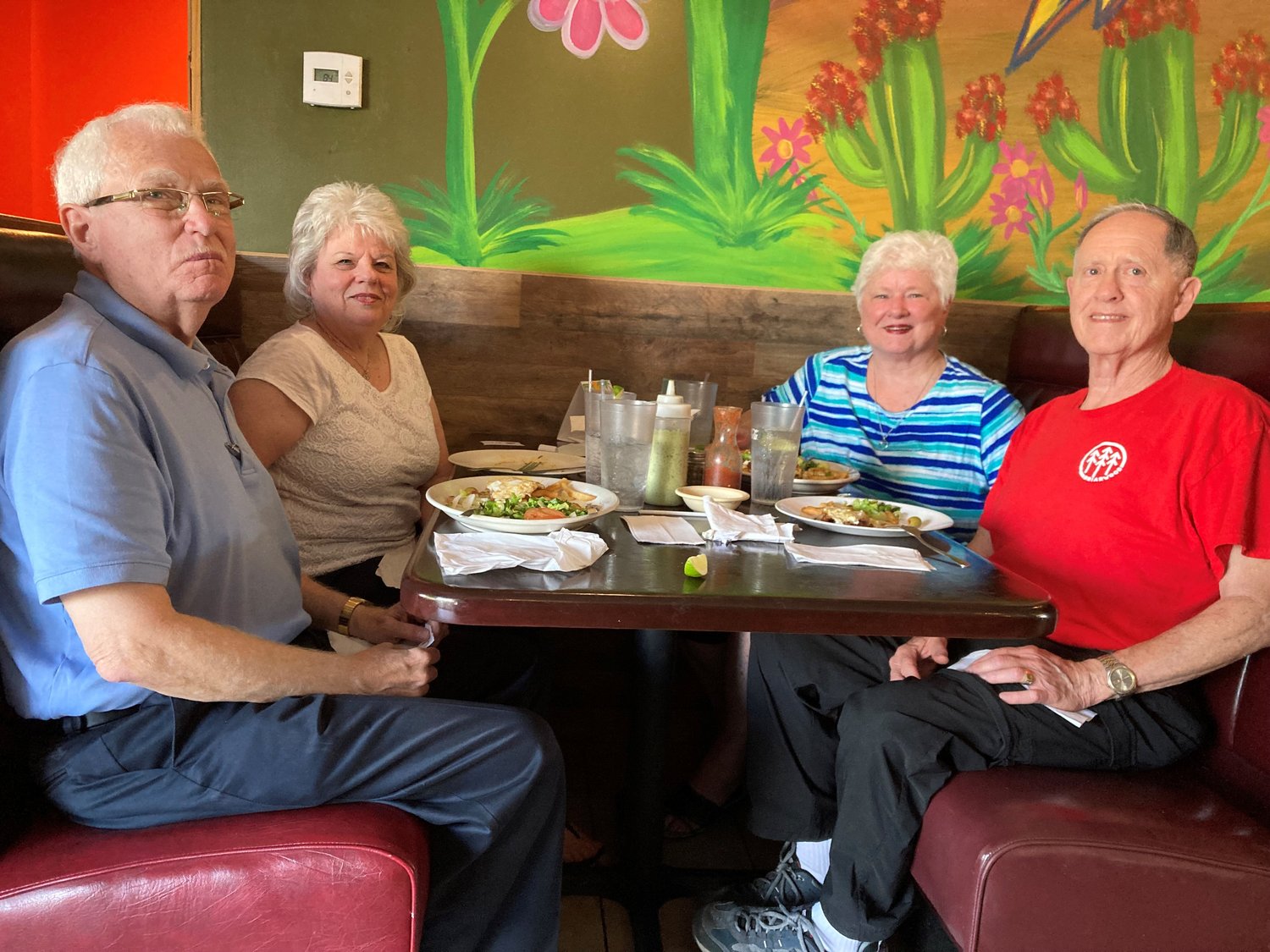 Some 25 retired IMB missionaries to Uruguay, including Dave and Diana Daniels, left, and Joe and Jeanie Benfield, gathered in Athens for a reunion. (Christian Index/Roger Alford)
Previous Next
Posted Thursday, June 23, 2022 10:52 pm
By ROGER ALFORD, The Christian Index

ATHENS, Ga. – They’re older now with graying hair and laugh lines, but a group of retired missionaries who spent much of their lives delivering the gospel to Uruguay haven’t lost their passion for  serving the Lord.

Some 25 of them gathered with hugs and handshakes at Sabor Latino restaurant in Athens on Thursday to enjoy some Uruguayan cuisine while reminiscing about the good old days of preaching and teaching in cities and towns in the South American country of 3.5 million people.

They and their predecessors did their jobs so well that the International Mission Board was able to pull most missionaries out of Uruguay two decades ago when the churches they had started grew strong enough to assume full responsibility for the Christian work.

Ranging in age from mid-60s to mid-80s, they’re now back in the U.S., still serving in various capacities in communities across the nation.

“They did great work in a very secularist country,” said California resident Robin Hadaway, a professor at Midwestern Baptist Theological Seminary who once was the IMB’s regional leader overseeing international missions in Uruguay and neighboring South American countries.

According to the Pew Research Center, 15 percent of the country’s population now self-identify as Protestants. While that percentage is relatively low by U.S. standards, it eclipses many of the countries where the International Mission Board is now focusing its efforts. Christians account for fewer than 1 percent of the population in some areas of the Middle East, Sub-Saharan Africa and Central Asia.

Hadaway likened the Uruguayan missionaries’ work to that of the biblical mustard seed, in that it started small but grew large.

“There’s still much to do,” he said. “As you can imagine, those of us who worked in South America wish we were still there.”

In 1997, the IMB adopted a “New Directions” strategy for reaching every people, tribe, and language group in the world. As part of that strategy, Southern Baptist missionaries who had been so successful in spreading the gospel in Uruguay and other South American countries were redeployed into other parts of the world.

David Coppedge, a former IMB missionary who worked as a church planting catalyst in Uruguay, described the missionaries he served alongside as some of the hardest working and most committed Christians he’s ever known.

“They were very dedicated,” he said. “At one time, Uruguay was considered one of the most unreached countries in South America. The foundation for the gospel was laid in Uruguay because of what they did.”

Coppedge said the secular nature of the culture was perhaps the greatest impediment to sharing the gospel. Unlike residents of the Bible Belt where he grew up, Coppedge  said Uruguayans generally had no basic understanding of or familiarity with the gospel because they didn’t grow up hearing Bible stories.

Because of that, Coppedge said, the IMB missionaries spent a lot of time building personal relationships that opened doors to gospel conversations.

The missionaries also built lifelong relationships with one another – relationships that draw them together from across the country every two years for a reunion, Coppedge said.

Joe and Jeanie Benfield of Athens, Ga., hosted the reunion this year for missionaries who came from throughout Georgia, Alabama, Arkansas, California, Florida, Mississippi, South Carolina and Tennessee.

“These are our brothers and sisters,” she said, munching on chivito al plato, a Uruguayan dish, as she waved her hand toward rows of nearby tables. “Our children grew up together, so for them it’s like a reunion of cousins, aunts and uncles.”