From the beginning of our nation, Georgia Baptist chaplains have served God in times of strife 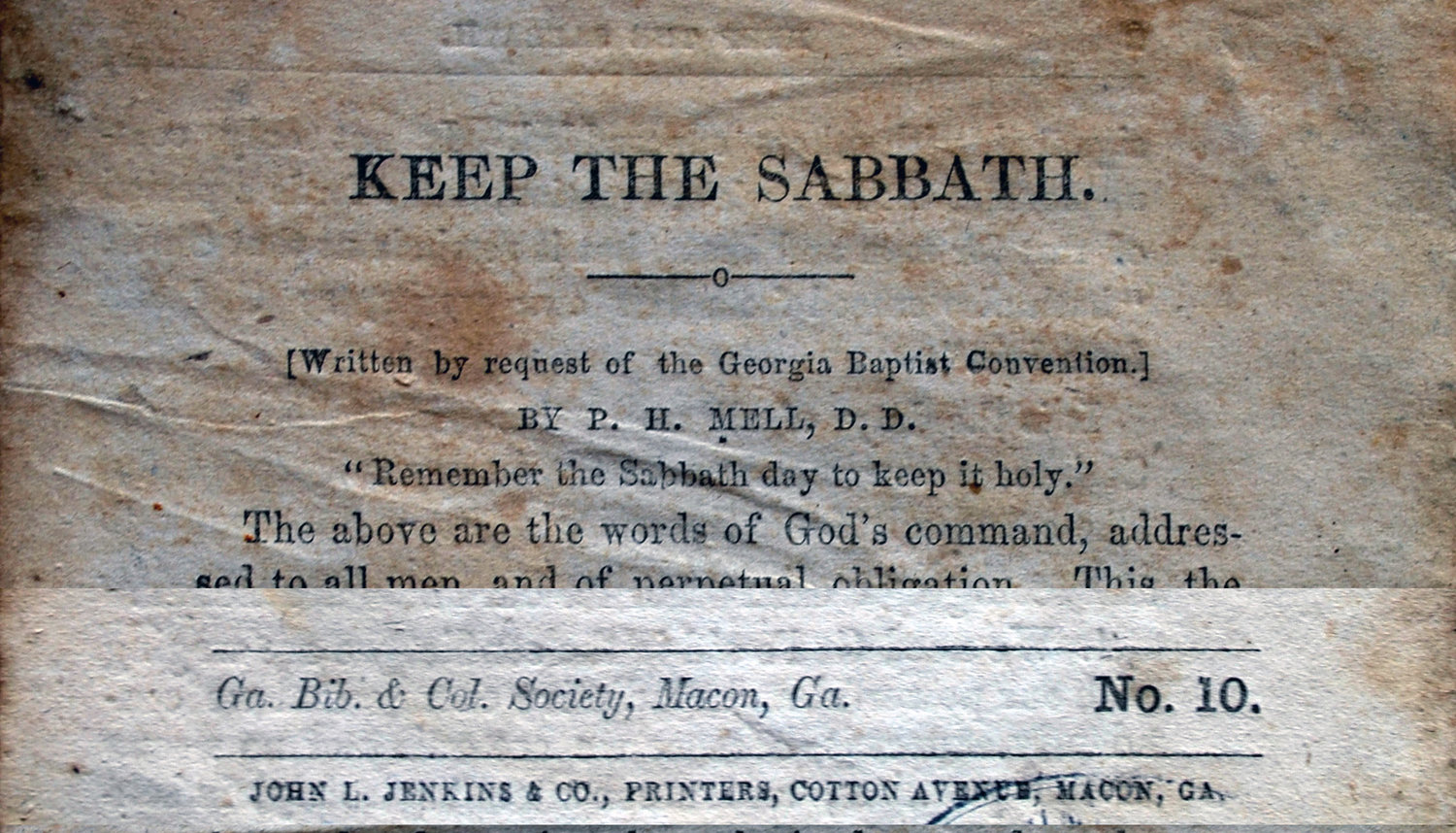 "Keep the Sabbath" was number 10 in a series of 24 tracts for soldiers published by the Georgia Baptist Bible and Colporteur Society during the Civil War. (Photo/UGA Special Collections Library) 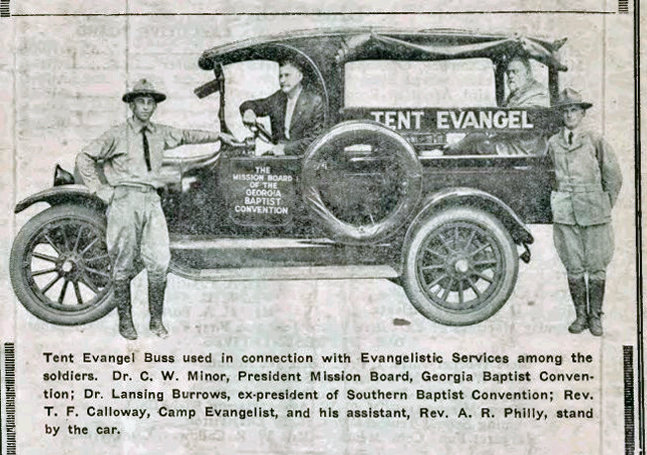 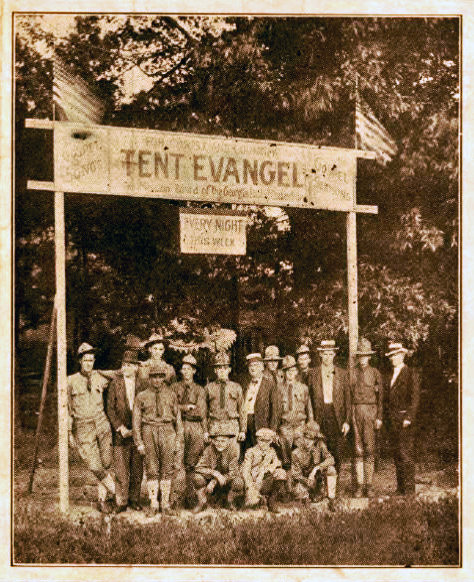 The Mission Board had a traveling tent ministry to Army training camps across Georgia in World War I (1917-1918). The banner reads, top to bottom, "For Christ and Country, Tent Evangel, Songs, Gospel Sermons, Mission Board of the Georgia Baptist Convention, Every Night This Week." (Photo/Digital Archives Mercer University, Macon, Ga.) 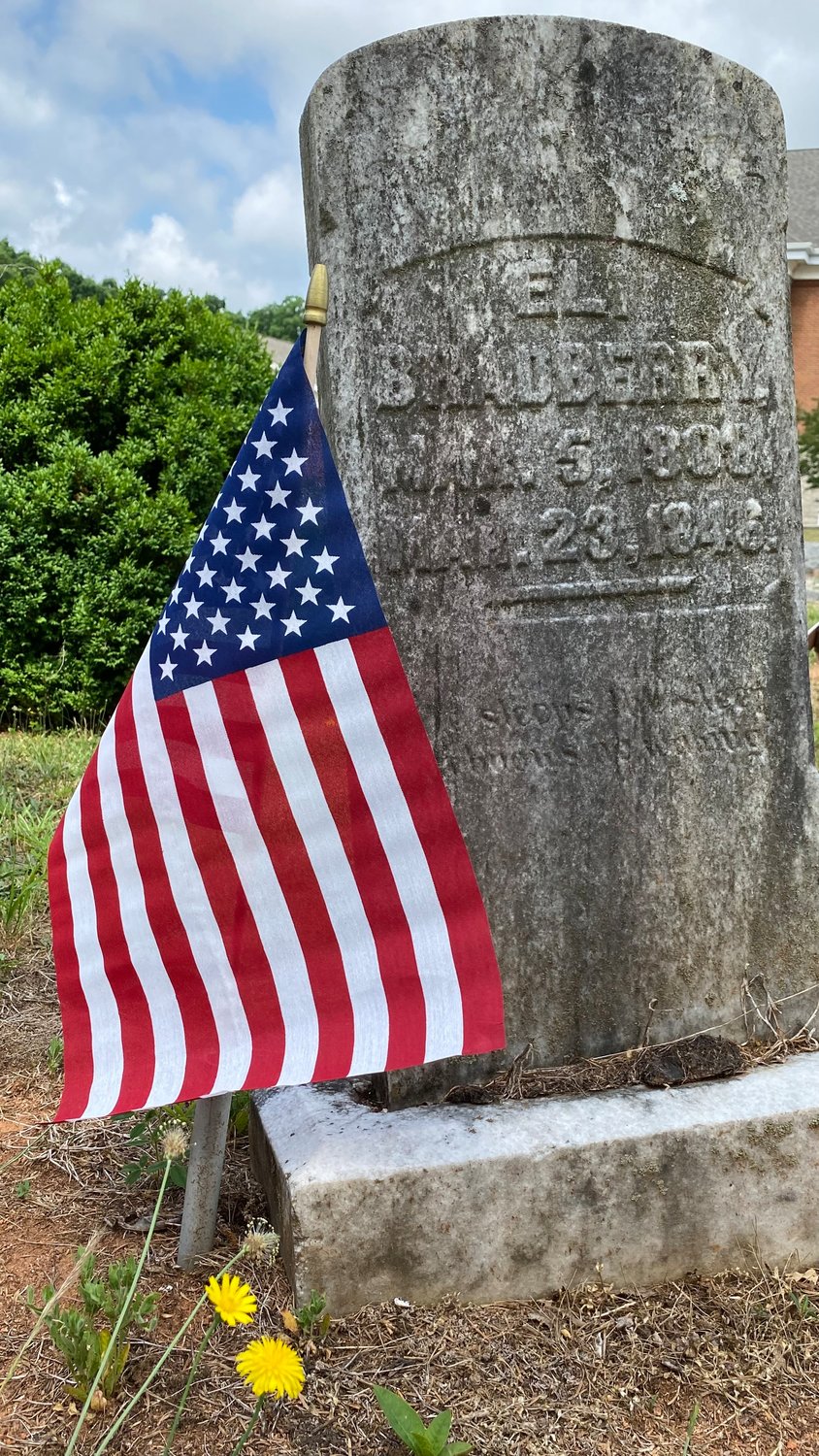 Eli Bradbery (1808-1846) was a Baptist layman killed in during war with Mexico in 1846. He left a widow Louisa with 10 children. Four of their sons died in the Civil War. He is buried in the Mars Hill Baptist cemetery in Watkinsville, Ga. (Photo/Charles Jones) 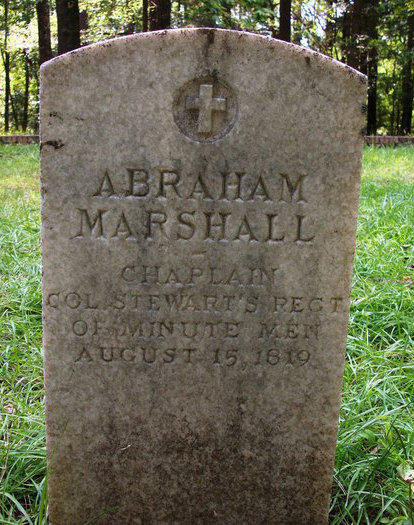 Rev. Abraham Marshall (1743-1819) served as a chaplain to the Georgia Militia during the American Revolution. He was one of the founders of the Kiokee Baptist Church and the Georgia Association. Six of the twelve chaplains in the Revolution serving Georgia militia were Baptist ministers. (Photo/Find A Grave)
Previous Next
Posted Tuesday, May 24, 2022 8:53 am

“About the first of February 1863, the good Lord poured out His Spirit upon us, hundreds were seeking the Lord for pardon of sins, almost daily there were some going down into the water, being buried with Christ in baptism . . . the interest was so great that I preached for weeks from four to six times a day.” Rev. J.J. Hyman, Chaplain 49th Georgia Infantry

From the American Revolution, Georgia Baptist have served as military chaplains and at times of war organized and sponsored ministries to the military/industrial complex. As the bicentennial of the Georgia Baptist Convention approaches, those efforts should not go unnoticed. They serve as a reminder to support those who continue to serve and sacrifice for the wellbeing of the nation.

It should be noted that the title “chaplain” has been used in various ways since 1775. In the early years it was broadly applied to any minister who preached and/or ministered to military. Today it is generally used as a descriptor to ministers who serve in the military in a vocational role.

During the American Revolution there were 12 men who served as chaplains to the Georgia Militia. Although there were only seven Baptist churches in Georgia at the time, six of the 12 chaplains were Baptist ministers. A compelling reason for their service included the struggle for religious liberty. Several of the chaplains, including Abraham Marshall and Silas Mercer, found it necessary during the war to flee the colony for the protection of their families.

Georgia’s elder Baptist statesman Daniel Marshall remained in Georgia for the duration of the war. On one occasion he was arrested and held by the Tories. Requesting permission, he was allowed to preach to the troops. Marshall was not an educated and eloquent preacher, but his sermons came from the heart and often melted the hearts of those listening. Following the sermon, he was released and continued to shepherd the churches whose pastors had fled for the safety of their families.

During the various Indian Wars, one Georgia Baptist pastor was killed while with troops searching for Indians. Little is recorded of Georgia Baptist work among the military during the War of 1812 although the Georgia and Sarepta Baptists associations went to war on their knees, calling for a day of “humility, fasting and prayer” on June 18, 1813, to “avert the calamity of war.”

During the Texas War for Independence (1835-1836) many Georgians went to aid in the fight. At least one, T.J. Bowen, returned a new believer who would later become the first SBC foreign missionary from Georgia in 1847. He would briefly serve as a chaplain during the Civil War (1861-1865). Another Georgia Baptist-raised layman, Eliel Melton, was killed at the Alamo.

Likewise, little is recorded about chaplain service during the Mexican War (1846) although Georgia Baptists served in the military and at least one layman, Eli Bradberry, was killed in the war and his remains returned to Georgia where he is interned in the Mars Hill Baptist cemetery in Watkinsville.

The Civil War saw Georgia Baptists’ largest organized response to ministry during a war. At least 52 Georgians served as Baptist chaplains. There were five types of ministers designated as chaplains during the era. (1) Minister/soldiers, serving in the ranks who were allowed to preach as duties allowed. (2) Visiting ministers, who visited the troops in the field (sometimes traveling to other states to visit units from their communities) to preach and/or may have visited in military hospitals in their communities on a regular basis. Typically, they were asked to preach to other units while visiting. (3)  Army Chaplains, who were commissioned and salaried by the military for their service. (4) Camp Missionaries/Camp Chaplains or Camp Evangelist (used interchangeably) who were supported by the GBC, local associations, or SBC Home Mission Board. (5) Colporteurs who were under the appointment of the Georgia Baptist Bible and Colporteur Society. They preached, distributed Bibles and tracts. The Society, established in 1858, published a series of 24 tracts for soldiers during the war under the categories of: evangelistic, temperance, hospital, and devotional. Other colporteur societies also sponsored work to the armies of the north and south.

Furthermore, The Christian Index became a ministry to soldiers. The paper featured a “Soldier’s Column” with devotional reading and the Index carried war news. Chaplains sent reports of their ministries which were printed on the pages of the paper. A ministry was established to pay for the Index to be sent in bulk to camps across the south.

The Civil War was noted for camp revivals where thousands were saved. J.J. Hyman, Chaplain 49th Georgia Infantry wrote in May 1863, “The day the army was to march on the Pennsylvania campaign, yes, while the regiments were being ordered to fall in. I was baptizing near Wright’s Brigade. Baptized forty-eight all in twenty minutes.”

American’s involvement in World War I lasted two years 1917-1918. Some military chaplains were local church pastors whose churches provided a leave of absence for them to serve. George Truitt, pastor of FBC Dallas, Texas was granted a leave of six months to preach in France and Belgium. Other chaplains were ministers commissioned by the armed services for the duration.

During World War I, the Georgia Baptist State Mission Board Evangelism Department established a circuit “Tent Evangel” ministry to the major military training centers in Georgia. A tent was set up near the bases. Services were held nightly for a week or two before moving on to the next camp. The ministry used a bus to transport troops to and from the services. State Evangelist T. F. Calloway and his assistant A. R. Philly were appointed to this ministry. Calloway would serve as the President of the Georgia Baptist Convention (1934-1935).

During World War II, the Georgia Baptist Convention established several ministries for the military community and to workers in the military industrial complexes. Not to mention many Georgia Baptist pastors who served as commissioned military chaplains. There was a focus on established churches in areas like Columbus and Marietta which grew rapidly due to the military/industrial buildup. One of those church starts targeting civilian workers is now the Eastside Baptist Church in Marietta.

Although Georgia Baptists have not sponsored focused ministry to the military community since World War II, many Georgians have served as military chaplains, in the Korean Conflict, Vietnam, Gulf Wars, Iraq, Afghanistan and in times of peace. These chaplains have faithfully preached the gospel and ministered to the military and their families in times of crisis and grief. Chaplains are often overlooked because of the transient nature of their ministries. Thankfully they have and will continue to serve the Lord as they serve the military community.

This Memorial Day, it is well to remember not only those who have made the ultimate sacrifice, but those whom Georgia Baptists have supported as they served. Those who have served faithfully in times of war and times of peace. If in the future there is a need, Georgia Baptists have a heritage of service and ministry to the military and should be ready to serve again.

For 101-year-old woman, encounter with Corrie Ten Boom was life-changing