Jackie Frith surveys some of the 600 century-old pecan trees he lost overnight in the eye of the hurricane. JOE WESTBURY/Index
Posted Thursday, April 18, 2019 11:02 am
The Christian Index

Jackie Frith surveys some of the 600 century-old pecan trees he lost overnight in the eye of Hurricane Michael last fall. Frith's story was one of several chronicled by former Index Managing Editor Joe Westbury, who earned a second-place finish in the Series category at the recent Wilmer C. Fields Awards Competition. JOE WESTBURY/Index 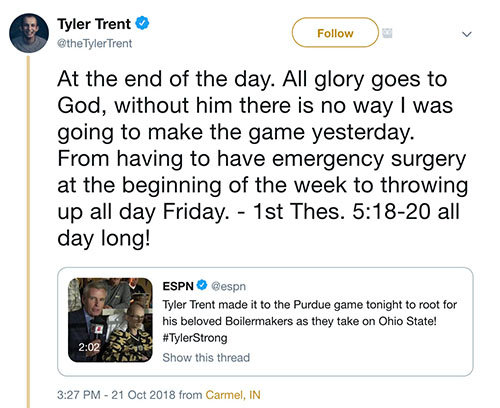 A column about Tyler Trent, a University of Purdue student battling cancer, brought Index Editor Scott Barkley to 1st place in the Editorial/Opinion category for the second straight year.

Scott Barkley, editor of The Christian Index, placed 1st in the Editorial/Opinion category for the second year in a row with “Tyler Trent and the megaphone no one wants, but the world needs.” Written last fall, the column focused on the faith of Trent, a University of Purdue student, during his fight with bone cancer. 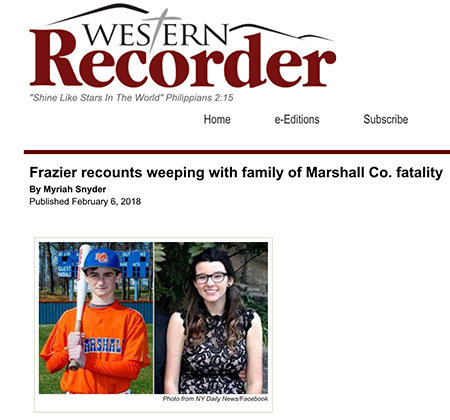 Index Content Editor Myriah Snyder's story about a pastor ministering in his church after a school shooting brought a 3rd-place finish. WESTERN RECORDER/Special

Former Index managing editor Joe Westbury’s collection of articles cumulatively titled “Surviving Hurricane Michael” finished second in the Series/Package category. “A great deal of work went into these stories, which are masterfully written and meticulously researched,” wrote one judge. “You did the farmers in your state proud!”

Myriah Snyder, Index content editor, received 3rd place in the Single Article-less than 750 words category, with “Benton pastor recounts weeping with family of Marshall Co. fatality.” The story was written during Snyder’s previous employment with The Western Recorder, the state news publication for Kentucky Baptists. In it she chronicles Pastor Charles Frazier’s attempts to minister to a family in his church whose son was killed during a school shooting. Frazier was serving as the Kentucky Baptist Convention president at the time.

“Touching and graciously written in a way that’s respectful to those who are grieving,” a judge stated.

“Your choice to move from an icon-only home page to tiled images is a good one. The tiles give the user a window into the area they’ll be going. It’s difficult to take information from different sources and formats and put them into a single unified environment,” said one judge. “I commend your effort to do this! I know that Georgia Baptists will appreciate this app.” 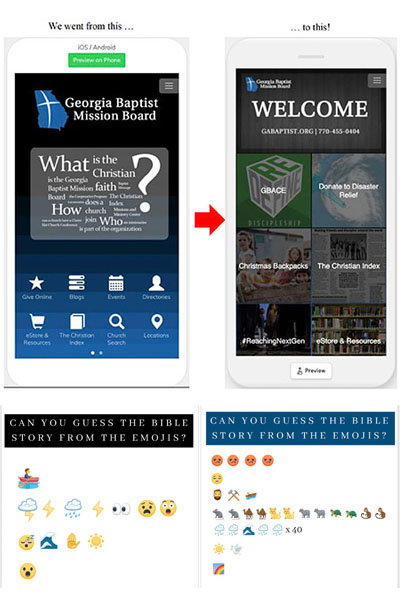 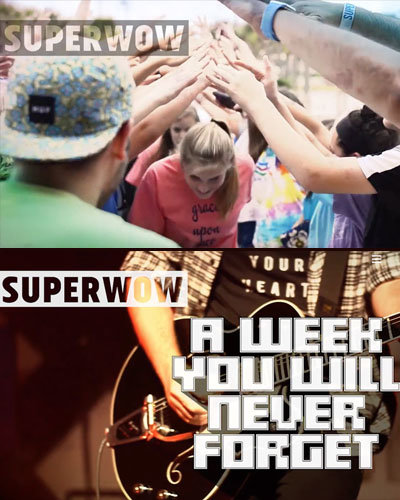 “Much cleaner homepage,” followed another comment. “Information is easily accessible.”

“This is a step forward from the prior app,” stated another. “I hope this app continues to iterate and improve to better meet the needs of the users.”

Wilkins’ finished third in Social Media-Single Post for a post on World Emoji Day. Through it, Wilkins told various Bible stories exclusively through the use of emojis, inviting comments on guessing the passage.

One judge commented, “I thought this was brilliant and extremely creative! I loved this entry and literally laughed out loud when I saw it.”