The first of five teams deployed July 11 after flooding destroyed over 1,000 homes and killed at least 23 people. In addition, the list of schools postponing opening grows as communities continue to assess damage. 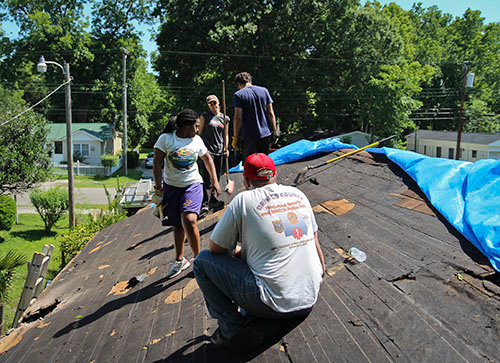 A team from the Baptist Collegiate Ministries of Armstrong Atlantic State University and College of Coastal Carolina work in May on cleanup after flooding that hit South Carolina the previous fall. GBDR/Special

The increase in teams reflected the need. When Team 5 leaves tomorrow Georgia volunteers will have completed 187 work days. Add to those efforts 29 mud out jobs and placing one roof tarp. Chaplaincy work brought 110 contacts with 92 gospel presentations, 46 ministry contacts, two professions of faith, and two other decisions.

As West Virginia operations for Georgia volunteers wind down, South Carolina needs from floods last fall continue. Weeklong deployments of teams up to 25 people are still available through September in cleanup and recovery. For more details contact Community Missions and Disaster Response of the Georgia Baptist Mission Board by emailing pficarra@gabaptist.org or calling (770) 936-5254.