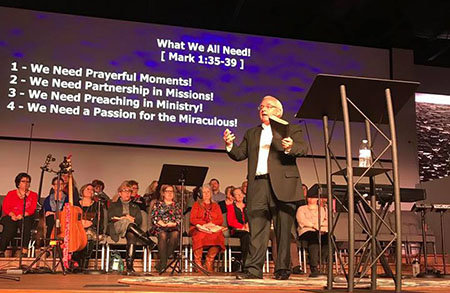 Moore said in the letter that a task force in Georgia had conducted an investigation to determine the number of churches that had stopped supporting the Cooperative Program because of the ERLC.

“There has never been such a task force in Georgia,” said Tommy Fountain Sr., chairman of the Georgia Baptist Mission Board’s Executive Committee. “I can’t speak to why Russell Moore made this claim, but I can state categorically that it isn’t true.”

Fountain said the GBMB’s Administration Committee did reach out to Moore at one point to ask him about a separate issue. “We simply wanted to get him to answer questions concerning a video in which he said he would attend gay wedding receptions,” Fountain said.

Moore had said in a national conference called  “The Gospel, Homosexuality, and the Future of Marriage” in 2014 that he wouldn’t attend a gay wedding, but “I would attend the reception. I think it’s a different thing.”

Fountain said he felt “it was critically important for us to be clear to Georgia Baptists and Southern Baptists that no such task force has ever been in existence in Georgia.”