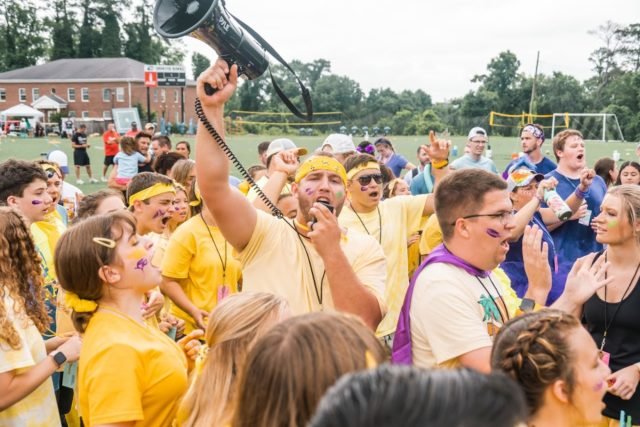 Teens enjoy activities at a Georgia Baptist camp in this file photo. Along with the fun, students also make major spiritual decisions at the camps.

SNELLVILLE, Ga. – Teenagers exploring a call to ministry can get the guidance they need to make sense of what can be a confusing time in their lives under a new initiative from the Georgia Baptist Mission Board.

The Called to Ministry initiative for high school students will be instrumental in preparing the next generation of pastors, Levi Skipper, leader of church strengthening for the Mission Board, told the Georgia Baptist Executive Committee on Tuesday.

Through the initiative, students will gather online once a month to talk with experienced Georgia Baptist ministry leaders about what lies ahead.

Skipper said the first such meeting in August involved students from across the state.

“There really just hasn’t been a clear pathway for teenagers to take when they felt called to ministry,” Skipper said. “We want to change that in the state of Georgia. There are students throughout this state who feel called to ministry, but for whatever reason we have begun to pull away from challenging people to respond to that call. We want to revive that.”

The Called to Ministry initiative was born partially out of Skipper’s own experience as a teenager. He drew laughs from the Executive Committee when he joked that, as he wrestled with his call to ministry as a high school student, he randomly opened his Bible and haphazardly dropped his finger on a verse, hoping for a sign from God. His finger fell on the words: “Do you need a sign? You have the sign of Jonah.”

Skipper said he wants to create smoother pathways for the next generation of pastors, missionaries and evangelists.

“I shared with my parents and my pastor what I sensed God was doing in my heart," Skipper said. "They sought to help the best they could, but, looking back on that experience, I realize there wasn’t really a clear pathway for my development.”

Skipper said teenagers will receive instruction and inspiration for their journeys into ministry as well as action steps to help guide them in the process.

“I am confident this process will help us raise up a new generation of leaders to help strengthen churches,” he said.

At the Georgia Baptist Mission Board’s major events for students, including the Surge150, Impact and SuperWow camps, invitations were not solely to become Christians but also to respond to God’s call to ministry. The first wave of teenagers enrolled in Calling the Called came from those events.

At the Impact Camp in June alone, 33 of the 514 students participating said they were feeling a call to full-time ministry, said Chris Trent, the “Next Gen” catalyst for the Georgia Baptist Mission Board whose job is to help churches with their ministries to the next generation.

“One key action step for each student will be to secure a ministry mentor from their local churches,” Skipper said. “We will provide that ministry mentor with a list of questions to ask their student that coincide with what they are learning in our online training.” The plan, Skipper said, is to expand Calling the Called to college students and to adults 22 years old and older We didn’t just call people to salvation at the camps, but extended an invitation to people who feel like God is calling them to ministry to respond.

“I want to challenge you as a pastor to put this in the life of your church somewhere,” Skipper said. “You have a regular invitation; find a Sunday, maybe one per month, to invite people who are feeling called to ministry.”

“That’s where we can really come alongside and really help a pastor and his church,” he said. “Just imagine the difference this could make for the state of Georgia as it continues to grow. We’re going to have leaders who are developed, leaders who are encouraged to join our Baptist institutions, and, when it comes time for you to look for a staff member, there’s actually going to be a pond filled with great, great leaders for you to fish from.”