Georgia Baptist Missions and Ministry Center to be marketed publicly 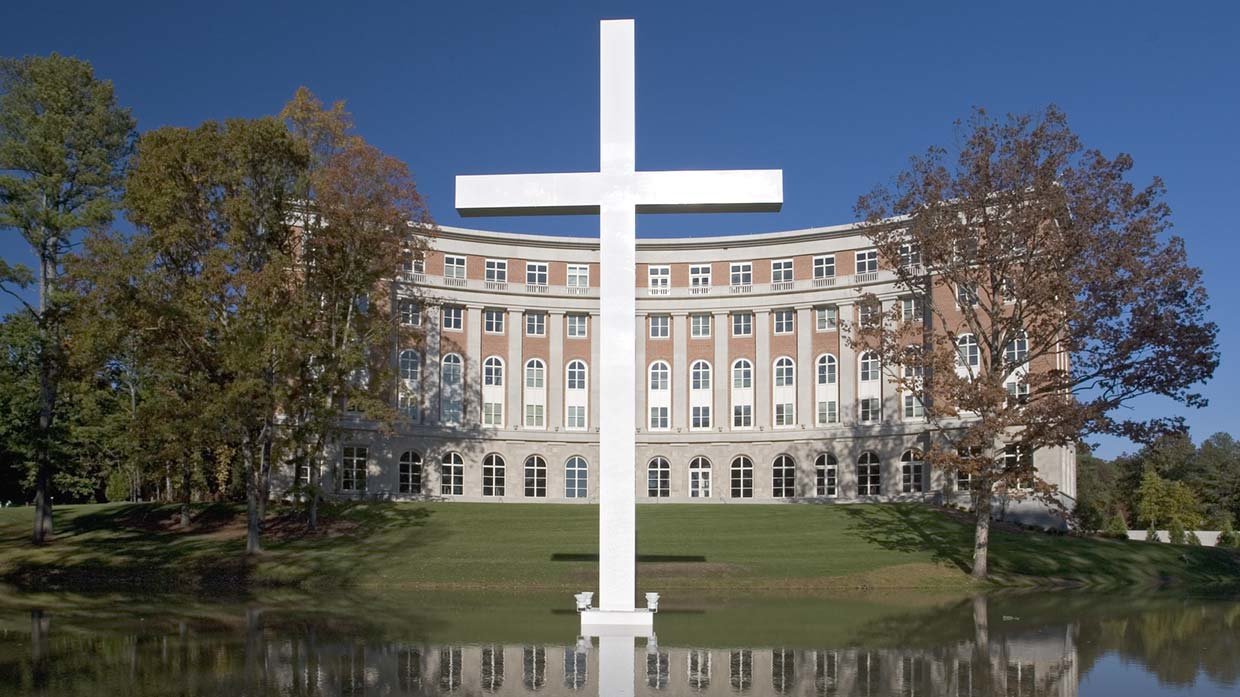 DULUTH – The Georgia Baptist Missions and Ministry Center on Sugarloaf Parkway was officially put on the market publicly for the first time last week. While numerous individuals and businesses have expressed an interest in the property in the last eight years, it has never been publicly put on the market or placed in the hands of a real estate broker. After extensive research and prayerful consideration, the administration has secured the help of JLL, a world leader in real estate services, to market the Duluth property on a comprehensive scale.

On May 22, 2006, the Georgia Baptist Missions and Ministry Board staff met in the chapel – their first day in their new state-of-the-art facility on Sugarloaf Parkway in Duluth. On the front page of the June 8, 2006 issue of The Christian Index, there is a picture of a huge crane swinging the 55-foot cross into place in front of the expansive five-story building.

The building was accented by a New Testament and an Old Testament lobby with exquisitely beautiful murals painted by Frank Murphy, campus minister at Berry College in Rome. The lobbies are enhanced by a replica of Judge Roy Moore’s Ten Commandments monument on display at the entrance of the building. Marble statues of Jesus blessing two children and the Apostle Peter, declaring, “Thou art Christ, the Son of the living God” bear testimony of the building’s intentional design and furnishings. Additionally, there is a serene prayer room with a beautiful stained-glass window of Jesus in the Garden of Gethsemane on the fourth floor. The image of the Lord’s Last Supper etched in stone on the fifth floor’s conference suite is masterfully engraved.

While the new facility was beautifully symbolic of the Christian faith and marvelously functional, some felt like the property should be sold in order to free up more money for ministry. In March 2012, only six years after the staff had moved into the Duluth property, the Georgia Baptist Executive Committee voted to entertain any valid offers for a potential sale of its Baptist Missions and Ministry Center and 43 acres of property. GBC Executive Director J. Robert White, citing interest from realtors and private entities made the recommendation to the Executive Committee.

On March 10, 2015, The Christian Index announced that the Georgia Baptist Mission and Ministry Center property had been paid in full by a $25 million gift from the Georgia Baptist Health Care Ministry Foundation. The announcement of the gift relieved the convention of an annual $1.6 million debt obligation.

The attrition of staff caused by retirement, restructuring, and relocating personnel to different parts of the state has reduced the number of those occupying the building to less than 50 people actually working on site. The administration has indicated that the space currently needed for staff is approximately 20,000 square feet and only the fifth floor is being used by the Mission Board personnel at the present time. In contrast, the current building on Sugarloaf Parkway has 142,000 square feet.

There is no location in Gwinnett County that is more attractive and desirable than the property owned by the Georgia Baptist Convention. No appraisal of the property could adequately reflect its value or worth to certain entities or corporations interested in prime real estate.

In recent years, a debate has arisen among Christians as to whether or not a ministry needs to possess its own building in order to fully respond to the call of Christ. Some contend that buildings are superfluous to the ministry’s identity and function, while others contend that they are necessary tools. In the case of the Georgia Baptist Mission Board, the leadership has concluded that their greatest investment must be on missions, ministry and personnel and that they will seek to practice good stewardship by selling the current facility, locating and/or building a smaller ministry center within a seven-mile radius of the Sugarloaf property and using the surplus to enhance and enlarge the ministry of the Georgia Baptist Mission Board even into the distant future.