Awareness seminars for child abuse prevention, such as this one at First Baptist Church in Litha Springs, have become commonplace with the Georgia Baptist Mission Board's partnership with MinistrySafe. The next free awareness training comes on Oct. 30 at Crabapple First Baptist. ALAN FOLSOM/Special
Posted Monday, October 1, 2018 3:14 pm
Scott Barkley

Above: Free awareness seminars for child abuse prevention, such as this one at First Baptist Church in Lithia Springs, have become commonplace with the Georgia Baptist Mission Board's partnership with MinistrySafe. The next free awareness training comes on Oct. 30 at Crabapple First Baptist. ALAN FOLSOM/Special

DULUTH — For six years, Georgia Baptist state missionaries have benefitted from training focused on the safety and welfare of children. And as one of the larger Baptist conventions, it sent a signal for others to join a movement.

"In 2012 I addressed all state executive directors in Oklahoma City and told them there's a unique problem as unfolds in Baptist polity," explained Greg Love, a Dallas-based attorney and co-founder of MinistrySafe and Abuse Prevention Systems, told The Index on Sept. 10. "Dr. White and Dr. Jordan were the first two to decide 'yes.'"

That step from Georgia Baptist Mission Board Executive Director J. Robert White and his Oklahoma counterpart, Anthony Jordan, has led to hundreds of Baptist employees in both states receiving the latest training in protecting children from predators.

On Sept. 1, the Georgia Baptist Mission Board officially adopted an updated Child Protection Policy signed by all employees. The policy instructed state missionaries on areas such as reporting suspicions of child abuse and appropriate interactions with children. At an August GBMB staff meeting Kevin Smith of Mission Board Operations explained the updated policy as well as alerted full-time employees to additional sexual abuse training in the future.

"Most churches think they're fine," asserted Love on child abuse prevention strategies. But getting to "fine" requires a lot more than a background check. An over-dependence on those has lulled many churches to a false sense of security. Because of that, he advocates churches "building a new fence." 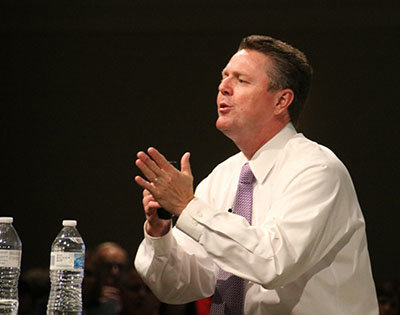 The objective should be prevention training, he stated, not just reporting. The new fence can't be limited to background checks. It's also important to identify predators and their grooming process of finding the next victim. That includes additional steps such as child check-in systems, consistently updating child care volunteers on church policies, and making sure at least two adults are in the same area as a child or children.

As reports of sexual abuse of minors has skyrocketed in number and scope, so have calls to ensure a culture dedicated to preventing it.

"I want to get to why churches think they're fine," Love added. "We think it's someone else's problem."

A situation no one wants to face

Georgia Baptist churches interested in the training programs offered through MinistrySafe have received that opportunity over the last couple of years. In that time Love has crisscrossed the state with GBMB leaders, presenting the free seminar for anyone interested. The next such training will take place Oct. 30 at Crabapple First Baptist Church.

Alan Folsom, Georgia Baptist state missionary in Church Administration, has made those trips with Love. That time has brought clarity to the importance of such training for congregations. The it-won't-happen-here mentality is naive at best.
"Dangerous" is closer to the reality. In 2014 the Florida Baptist Convention was ordered to pay $12.5 million resulting for a child abuse case involving a pastor. Ultimately, a settlement involved the dismissal of the entire action prior to entry of final judgement of the court.

A court decision just last month showed the importance of continuous following up on the training. In that case, the Baptist General Convention of Oklahoma was ordered to pay an undisclosed amount from a lawsuit over the rape of a 13-year-old at the Convention's Falls Creek Baptist Conference Center in 2016.

"I've seen how easy it is for churches to face this situation," he says. "Church staff feel they know a person and can trust him or her."

In addition to the obvious desire to protect children, there are other factors churches need to acknowledge, he added.

"For a volunteer to be part of any Georgia Baptist camp, Bible Drill, or other event involving children, their church must have a child protection policy. We screen all volunteers through MinistrySafe. That includes background checks and what we've learned to identify through the training process.

"We had several calls last year that a church couldn't get insurance because they didn't have a child protection policy."

A call for diligence

At the beginning of 2016, Church Administration became the primary connector with MinistrySafe due to the Georgia Baptist reinvention. Folsom echoes Love in giving credit to White as "the driving force behind it."

"We try to get MinistrySafe a couple of times a year for training," said Folsom. "Like the other meetings, the one in Crabapple will be free. Also, we'll provide lunch." 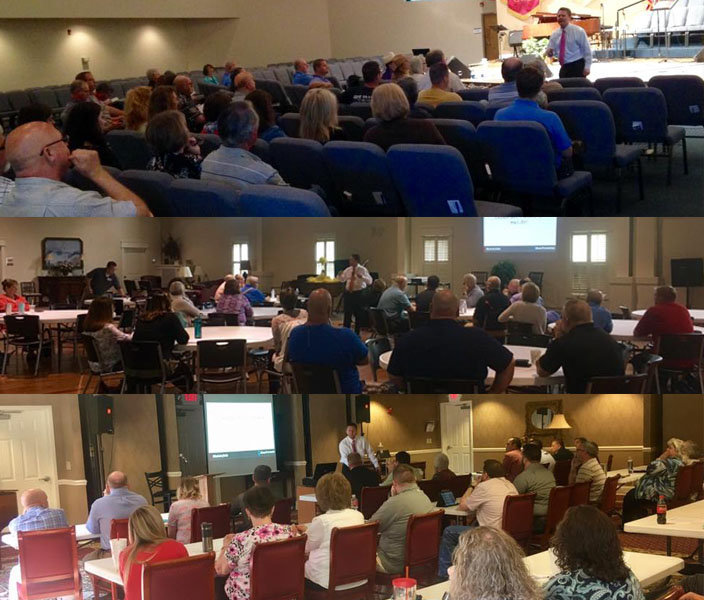 MinistrySafe co-founder Greg Love has been all over Georgia providing awareness seminars for free. Among those stops were, top to bottom, Grace Baptist Church in Cartersville, First Baptist Greensboro, and Villa Rica First Baptist. ALAN FOLSOM/Special

An annual membership for the training through MinistrySafe costs $250. However, alternatives to accommodate church budgets can be arranged. The process for staff and volunteers consists of an online training video accessible through a login and password. A set of questions follows each video. At the end of the course the trainee receives a certificate that can be printed out.

Matching Love's challenge, Folsom urges churches to change their own culture when it comes to child safety. Pointedly, recognize the potential for what it is.

"The church needs to be more diligent," he said. "We live in a dangerous world and the church is a wide-open target."