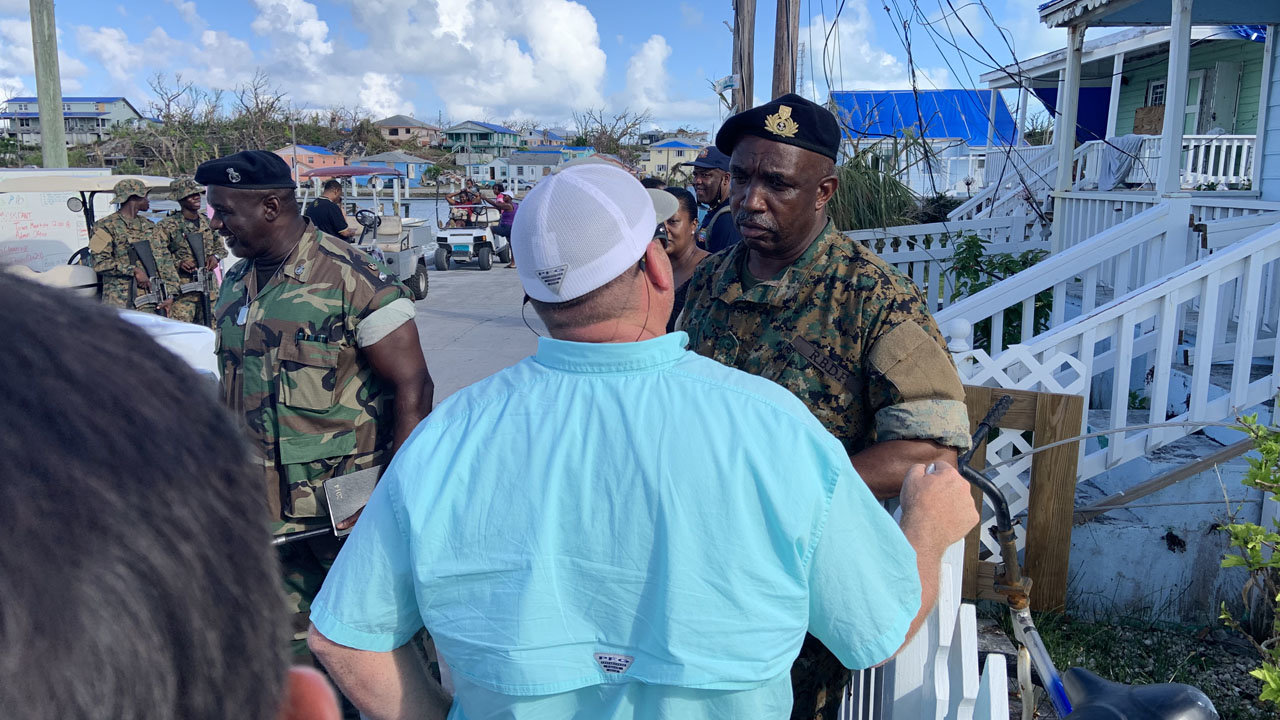 Eric Rentz, back to camera, is greeted by a member of the Bahamian Defense Force on the island of Green Turtle Cay in the Bahamas Oct. 4. Rentz, Georgia Baptist Missions consultant for the state's Southeast Region, accompanied a group that included two associational missionaries to help map out ways Georgia Baptists can assist with ongoing reconstruction efforts after Hurricane Dorian. JON GRAHAM/Special
Posted Monday, October 7, 2019 4:43 pm
Scott Barkley

Eric Rentz, back to camera, is greeted by a member of the Bahamian Defense Force on the island of Green Turtle Cay in the Bahamas Oct. 4. Rentz, Georgia Baptist Missions consultant for the state's Southeast Region, accompanied a group that included two associational missionaries to help map out ways Georgia Baptists can assist with ongoing reconstruction efforts after Hurricane Dorian. JON GRAHAM/Special 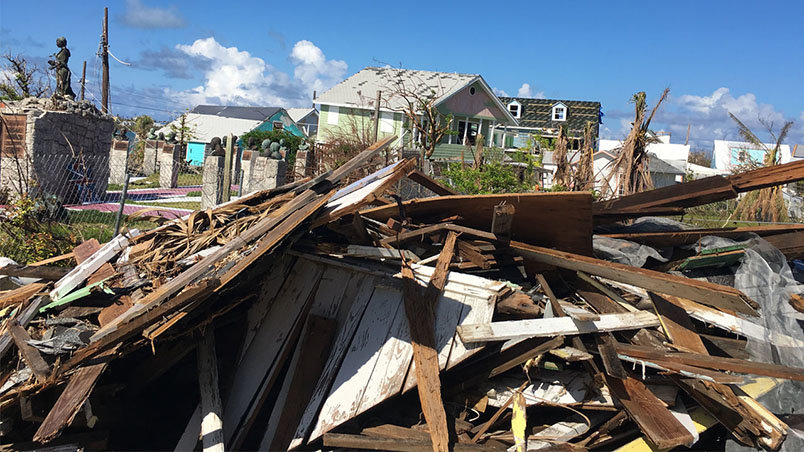 Cleanup and recovery efforts through both the Georgia Baptist Mission team and Georgia Baptist Disaster Relief may have different beginnings and implementation, but identical goals, say leaders.

The Missions team response begins with a request from churches to get involved, explained Rentz. That step came through Bentley, who will continue to manage volunteers and set up work assignments from Georgia. On-site leadership at Green Turtle Cay (pronounced KEY), an island on the east side of the Bahamas, will occur through Henderson and Julienne Hope, members of Shellman Bluff Baptist Church in Townsend. 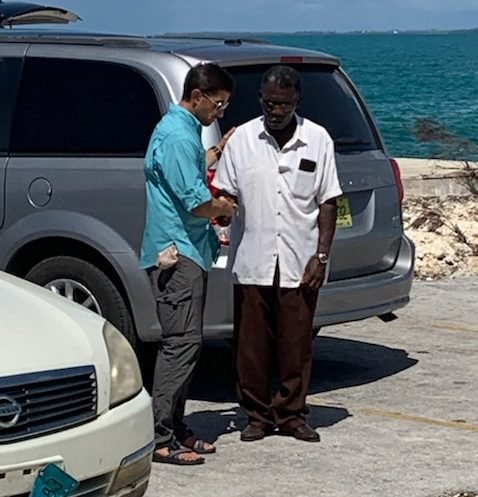 Henderson Hope will be on the field next Monday, Oct. 14, and joined by his wife at a later time said Bentley. That day they’ll also be joined by a team from Altamaha Baptist Church in Jesup traveling with Pastor Jack Lee.

Not too long after the Category 5 Dorian bulled its way across the Caribbean and up the Atlantic Coast, members of Tabernacle Baptist Church in Vidalia began collecting supplies to send to the area. They weren’t the only church to do so, but Tabernacle had a personal connection as one of their members grew up on Green Turtle Cay.

“That family called Buck and asked for some help in getting the materials to the Bahamas,” said Rentz. “He put them in touch with me.”

It so happened that Rentz was contacted the next day by Tim Harris, who owns a collection of Harris Ace Hardware stores throughout southeast Georgia. Based in Jesup, Harris began asking around for who could help him deliver supplies to the Bahamas. As the recent pastor of First Baptist in nearby Ludowici who had recently transitioned to his missions position, Rentz’s name came up.

“He heard that I live in Wayne County. The materials were secured from his end; all he needed was a way to get them there and labor once they arrived. I told him Georgia Baptists could help provide the labor.”

Widespread damage on Green Turtle Cay could be seen by a group last weekend that included Georgia Baptists. GREG BENTLEY/Special

Harris had fished in the Bahamas for decades, according to a story by Savannah TV station WTOC 11 that included the participation of Georgia Baptists. After the storm he flew to the Bahamas to rescue a friend’s family and witnessed the destruction firsthand.

“Mud-out has been completed so we don’t need to send Disaster Relief teams,” he told The Index. “There are 12 church families needing help to rebuild, with most of those needing new roofing.” 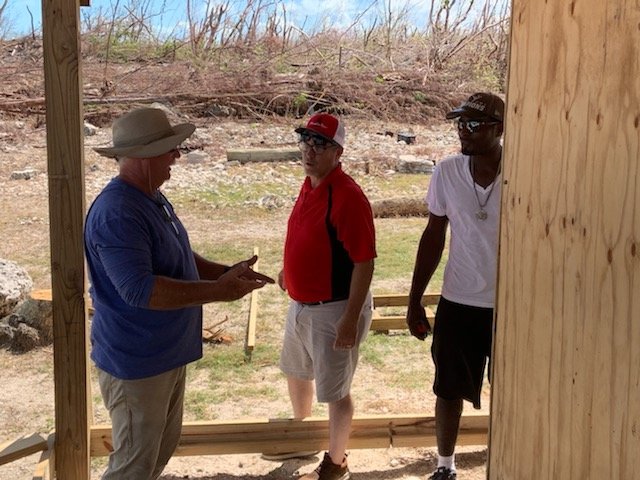 Shiloh Baptist will also require a new roof. In addition, one of its three buildings had also yet to be completed from original construction, Lang added. Electrical power to the church is expected to return within the next week, with him noting that its campus is “more than sufficient for teams to stay there.”

Lang relayed a story of further heartbreak for one area pastor. After Barrett attended worship at the church yesterday and went to lunch with others, he returned for a planning session with church leaders. The pastor, whose home had been damaged by the storm, arrived late.

“I just watched my house burn to the ground,” he calmly stated. Apparently, an electrical fire ignited from a downed power line no one realized was still live.

“Greg will be fielding those calls,” he noted. Burch further added that involvement of the Georgia Baptist Missions team for such events will change according to the situation.

“We want to help increase the opportunities for churches to be involved in missions by connecting them with others,” he said. “This was a ‘SWAT team’ approach in that brought a lot of groups together – including Georgia Baptists – to help others.”

An earlier version of this story said First Baptist Vidalia had a member from Green Turtle Cay. It has been corrected to Tabernacle Baptist in Vidalia.