ATLANTA — Georgia Baptists were among believers of all faiths who gathered at the State Capitol Jan. 16 to support National Religious Freedom Day.

The 25th annual event is officially proclaimed on January 16 each year by an annual statement by the sitting U.S. president.

NRFD commemorates the anniversary of the 1786 passage of the state of Virginia Statute of Religious Freedom, which was a forerunner of our religious freedom clause in the US Constitution’s Bill of Rights.

A number of GA legislators and faith-based organizations gathered at the Capitol press conference to call on our Georgia government officials to follow the lead of dozens of other states which restored a reasonable level of protection for our first freedom by passing a GA Religious Freedom Restoration Act.

State Missionary Mike Griffin, who serves as official lobbyist for the Georgia Baptist Mission Board, was among those speaking. Griffin oversees the Board’s Public Affairs Ministry and Facebook page.

Griffin was accompanied by Tom Rush, fellow state missionary who assists Griffin in the ministry

The passage of a Georgia Religious Freedom bill has repeatedly stumbled since Gov. Nathan Deal’s veto in 2016, but Christians are preparing to mount another attempt for passage.

Griffin led off the list of seven other program personalities. He began by stating that “the underlying premise of religious liberty is that the government should not set itself up as Lord of the conscience."

“The Founding Fathers knew that the Government was never to tell us what we can or cannot believe. Furthermore, we cannot be treated as second-class citizens for those beliefs. Nor should we be considered unfit for public service because of those beliefs, the way Chief Kelvin Cochran and Dr. Eric Walsh were!"

He then praised the beauty of the 1st Amendment.

“As a citizen, you can worship, who, what, where, and when you want to OR YOU CAN CHOOSE TO NOT WORSHIP AT ALL! (His emphasis). And this worship has the right to transcend a place of worship into the free exercise of that faith in a citizen’s everyday life. This is our conscientious right as Americans!” 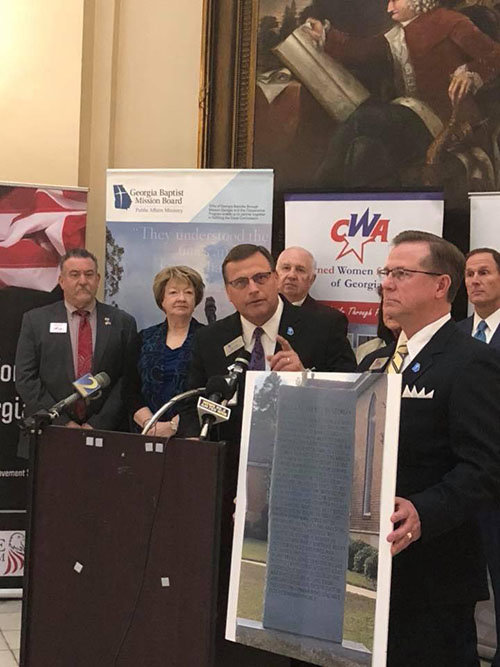 He then explained what he meant about the Government “not being Lord of the conscience.”

#1. We mean that “There is a court higher than the Supreme Court!”

“(In other words: GOD is higher than Government) It’s been said, Government may be my “Uncle,” but it can NEVER be my Heavenly Father!!!”

#2. We mean that “Every other freedom we have is based upon the 1st freedom: the freedom of religion. (or freedom of conscience)”

“In other words, freedom of speech, freedom of the press, … assembly, … to petition the Government, … and yes, the right to bear arms, are all not needed if we don’t have freedom of religion or freedom of conscience!!!”

#3. We mean that “We have the right as citizens to communicate and live out the message of our faith in public (not just while we are in houses of worship).

“You see, it is the 1st Amendment and the Freedom of Religion in our country that gives us the right to appeal to the conscience of man and see how God directs their thoughts and actions.

“Religious freedom is not a right that we can take for granted in this state. There is a monument near Augusta about religious liberty that was erected in 1937 in honor of Rev. Daniel Marshall. He was a Baptist who was arrested around 1770 for preaching the Gospel in Georgia. At his trial, he was ordered to stop. His response was, ‘whether it be right to obey man rather than God, ye be judge.’

“Again, here is the point: Our rights come from God, NOT from GOVERNMENT! (His emphasis)

“Government’s responsibility is to protect our God-given rights! Life, Liberty and the pursuit of happiness come from God, not government! Let’s keep it that way in Georgia! (His emphasis)

Georgia State Senator Josh McKoon then ended the brief comments by others with a discussion of the RFRA bill. McKoon was the 2015 GA Baptist Legislator of the Year for the Senate.