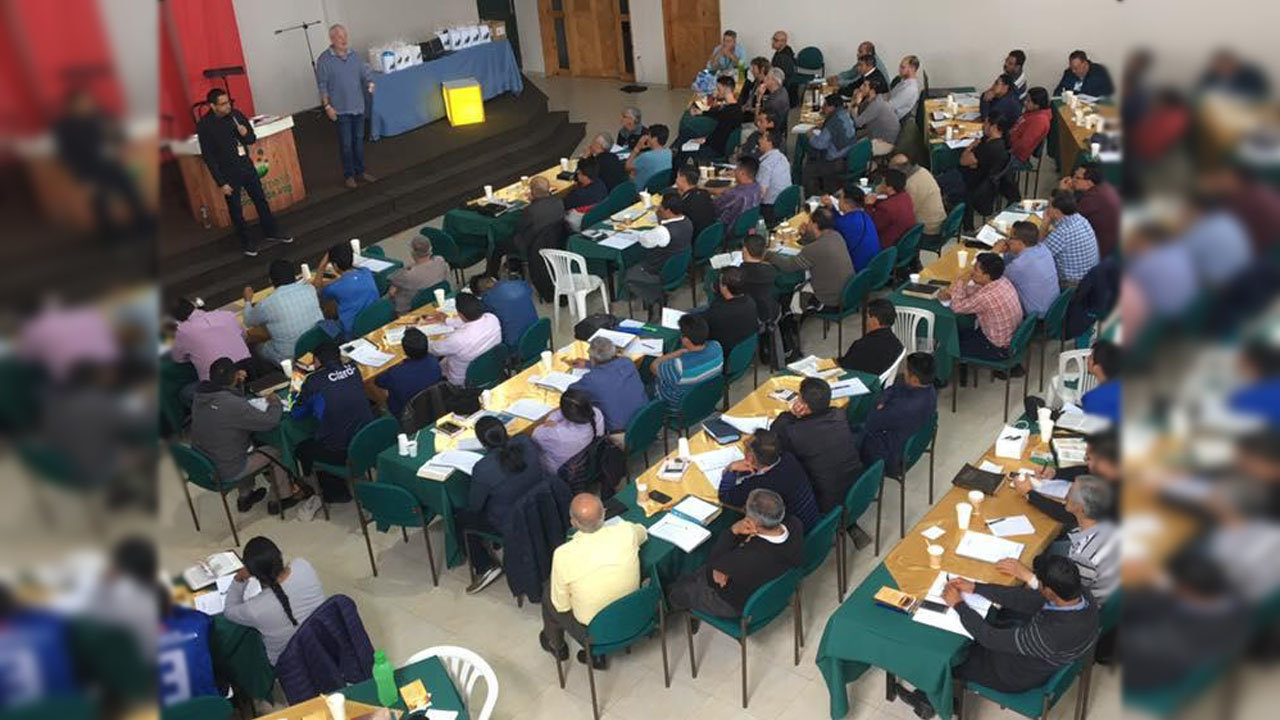 Missions opportunities such as helping lead pastor training in Ecuador, above, will be part of the new Georgia Baptist Mission Board missions platform. GBMB MISSIONS/Special
Posted Tuesday, May 19, 2020 8:02 am
Scott Barkley

In the works for upwards of a year, the goal is to alter the way churches see missions. “We want to change a church’s DNA to where missions is normal,” Buck Burch, Missions catalyst on the Church Strengthening team, told The Christian Index.

The purpose isn’t to change who and where a church is already active, Burch stressed. Instead, it is to identify those who would like to be more involved. The next step is to place them in a strategic missional relationship with another congregation.

The end result, stated Burch, would be to “diversify a church’s missions footprint.” Painting the picture for what that looks like, he took liberty to give the Great Commission a Southern makeover for Executive Committee members at the March 10 gathering held at Ingleside Baptist Church in Macon.

“ was basically saying, ‘All of ya'll are gonna be involved in reaching your Jerusalem and your Judea and your Samaria and the uttermost parts of the world simultaneously and with equal measure,” Burch stated.

“But in order for us to do that we need some kind of plan."

Going back to the first week of this year, meetings have been taking place to build connections between Georgia churches and those in state conventions. The relationships to come from that, say leaders, will encourage churches in Georgia to forge relationships with those in the following Baptist conventions: 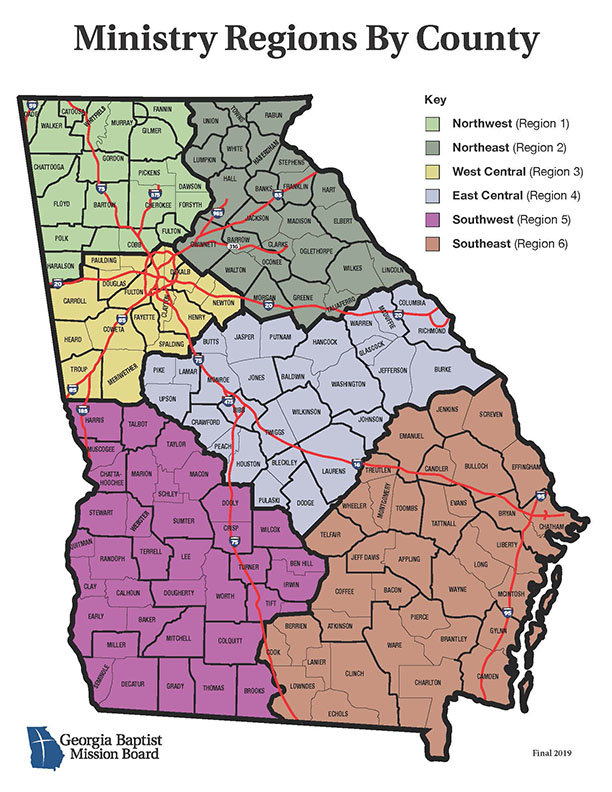 Those missional relationships are meant to grow organically, say denominational leaders. The Georgia Baptist Mission Board and connecting state convention will set up the initial communications. From there, though, churches in the different state conventions will have the freedom to shape that relationship that works best in their cultural and missional context.

State convention leaders determined through a variety of factors which Georgia ministry regions would best fit a state convention. In that sense, churches of the following regions and state conventions will build strategic missional relationships:

To strengthen relationships among churches, mission teams will be coming to Georgia from the other state conventions as well.

“Mission teams are only one piece of the partnership,” New England’s executive director, Terry Dorsett, expressed to Georgia Baptist leaders in January. “But it’s the first piece. You form relationships through being together.

“If you can get people on a mission trip, the connection between churches and people start from there.”

Making an impact in the Americas

In order to build a missions culture for the next generation, Burch told The Index, it is crucial for it to be grassroots and church-to-church.

In recent years the International Mission Board has prioritized resources to the 10/40 window, the area of the world mostly in the eastern hemisphere but also parts of Africa and Europe between 10 and 40 degrees north of the equator. That, plus the retirements of many longtime IMB missionaries, has left a stark need for training in evangelism and discipleship in Central America.

In meeting those needs, the Georgia Baptist Mission Board will also help facilitate missional relationships among churches in the following Georgia regions and a country:

Again, Burch repeated, the goal isn’t to pull churches out of established missional partnerships on any level.

“We want to help increase missions engagement among church members,” he said. “Locally, we’re going to be determining the highest concentration of lostness in their region and guide churches to where they can get involved.”

While a jump from local to international missions can feel daunting, the idea boils down to the simple connection of a church here to a church there, a pastor here to a pastor there. Each learns from the other how to more effectively tell people about Jesus. 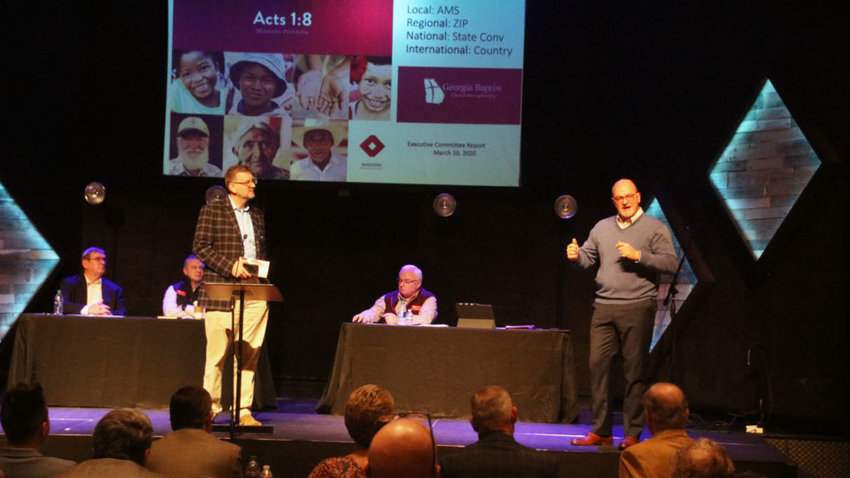 The Churches-to-Churches aspect of international missions will be managed through a virtual strategy coordinator (VSC), said Burch. These will be volunteers living in Georgia who will connect stateside congregations with those in another country. Each Georgia region will have ten VSCs.

“There are many people in Georgia who have experienced a call to long-term missions but may have hindrances preventing them from doing so,” Burch noted. “We want to do everything we can to give them that opportunity, at least on a short-term basis.”

More details of the regional, domestic, and international missions opportunities will be forthcoming. “I’m excited about the engagement opportunities opening up soon,” said Burch. Church leaders wanting to sign up for a missions consultation can do so through the Georgia Baptist Mission Board site.

Georgia Baptist Executive Director W. Thomas Hammond Jr., could barely contain his excitement over the announcement, calling it “an epic moment” in the history of the Georgia Baptist Convention.

“We’re talking about engaging and arming  into the fields of lostness,” he exclaimed. “We’re putting together a plan that could literally change a continent. This is exciting to me and I think it’s going to transform our Convention.”

Echoing Dorsett’s comments regarding relationships built through missions, Hammond gave a hypothetical scenario as to the results of the missions plan.

“There’s probably a ninth grader right now who could start going with his church to Michigan. He’ll go on mission trips to Michigan for four years and then it’ll be time to go to college. He may think ‘You know what? I’m going to college in Michigan. I want to move there.’ God may call him to ministry and he could become a pastor there.

“My prayer is we’ll have churches engaging with a church (for example) in New York. Maybe one of their staff members says, “Guys, I’m going to New York, after seeing the, I’m moving my family there.

“I’m praying with all my heart that college students and young people will want to serve in another country. What would happen if the Great Commission is being delivered everywhere by Georgia Baptists? I think it can happen.

“This is an epic moment.”