J. Robert White, right, looks on as University of North Georgia Campus Minister Ken Jones present a photo of the Missions and Ministry Center. Helping to hold the photo, whose matting was eventually signed by state missionaries, is Assistant Executive Director Bobby Boswell. BRYAN NOWAK/Special
DULUTH — The Georgia Baptist Mission Board staff celebrated the 25th anniversary of Dr. J. Robert White’s ministry as executive director on Oct. 4 with a luncheon in his honor. Although Dr. White did not assume his role as the leader of the Georgia Baptist Mission Board until January 1993, the staff was excited about launching the celebration ahead of schedule. When the Georgia Baptist Convention meets in November, messengers and guests will be able to join in the festivities as the executive director is recognized for his significant leadership for a quarter of a century. 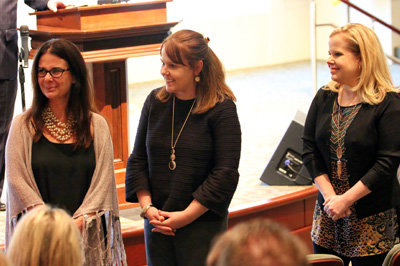 The morning started with the weekly chapel service at the Georgia Baptist Missions and Ministry Center with the executive director recognizing his wife, Janice, and their three daughters, Kathy David, Karen Lillard, and Jennifer Millage. Georgia Baptists’ esteemed leader then presented a very encouraging and affirming message from Philippians 2:1-4, focusing on the consolation in Christ, the comfort of love, the fellowship of the Spirit, and the compassion of mercies. A luncheon followed the chapel service with Bobby Boswell, Georgia Baptist Mission Board assistant executive director, presiding over the program. He alluded to the visit of a Catholic gentleman who had met with Dr. White at the building on Sugarloaf Parkway. He indicated that the man was remarkably impressed with Dr. White’s demeanor and obvious leadership ability. Boswell stated, “We have an executive director who is exemplary in representation of the Lord in all of his engagements.” 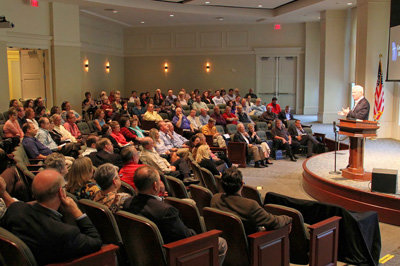 Georgia Baptist state missionaries gathered on Oct. 4 to recognize Executive Director J. Robert White for 25 years of ministry. BRYAN NOWAK/Special
Kevin Smith, vice president of Mission Board Operations who was a member of Dr. White’s church in Paducah, KY, commented that Dr. White is like the wise man in Proverbs 1 who will “receive instruction in wise behavior, righteousness, justice and equity ... and give prudence to the simple. To the youth knowledge and discretion will hear and increase in learning.” Smith added, “When he speaks, you can be sure the Lord has spoken to him.” Larry Wynn, vice president of Church Revitalization and Evangelism, said, “We are privileged to honor a man who epitomizes the words of Micah 6:8, a man who “ justly, loves mercy, and walks humbly with God.” Wynn, who was GBC president during the first two years of Dr. White’s service to Georgia Baptists, added, “I can tell you from the bottom of my heart that no one reflects the love of Jesus more than you, Dr. White. You are a great husband, father, and grandfather who knows how to love and how to lead.” 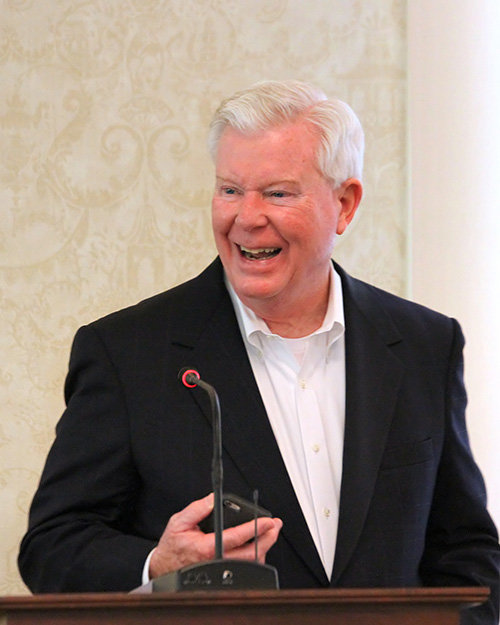 Steve Parr, vice president of Staff Coordination and Development, presented Dr. White a book of letters written by Georgia Baptist Mission Board staff and stated, “We love you, but we know that we are loved by you.” Parr jokingly added, ��I will pick out some of the best letters to read aloud.” Here is one from Toby Howell. It says, “Dear Dr. White, Thanks, Love, Toby.” Knowing that Toby is an efficient staff member, but a man of few words, the staff broke out into uproarious laughter. Ken Jones, campus minister to the University of North Georgia and the University of North Georgia – Gainesville was on Dr. White’s staff at Tabernacle in Carrollton years ago. “In Psalm 107:23 the Bible declares, ‘that there are those who go down to the sea in ships’" Jones declared. "I would go anywhere with Dr. White, because we have a great captain. “Dr. White, has been my pastor for 42-years. He took me on my first staff retreat. He showed me what ministry is all about – to seek and do God’s will and love people. "He taught me how to have fun while doing ministry," Jones continued. "He and Janice set an example for Janet and me about how to be partners in ministry. He is a pastor to all of us.”

A beautifully framed picture of the Georgia Baptist Missions and Ministry Center, exquisitely photographed by Bryan Nowak, who serves in Information Technology, was presented to Dr. White. Somehow Bryan compressed nine photographs into one amazing picture that had hologram-like qualities. 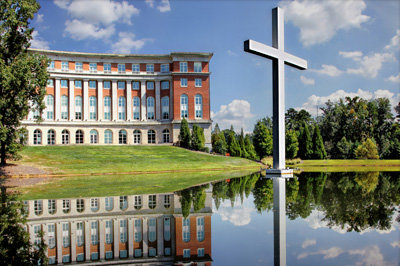 A portrait of the Baptist Missions and Ministry Center, which was constructed under White's administration, was presented to him at the luncheon. The photo was taken by state missionary and Duluth staff member Bryan Nowak. BRYAN NOWAK/Special
After the luncheon all Georgia Baptist Mission Board staffers were given the opportunity to sign the picture matting that bordered the photograph. Jon Duncan, specialist in Worship and Music Ministries, led the staff in singing one of Dr. White’s favorite hymns. Duncan said his two favorite hymns are “And Can It Be” and “Great is Thy Faithfulness.” The luncheon meeting concluded with the singing of:

“Pardon for sin and a peace that endureth, Thine own dear presence to cheer and to guide; Strength for today and bright hope for tomorrow, Blessings all mine and ten thousand beside!”

It was an appropriate ending to a blessed celebration.