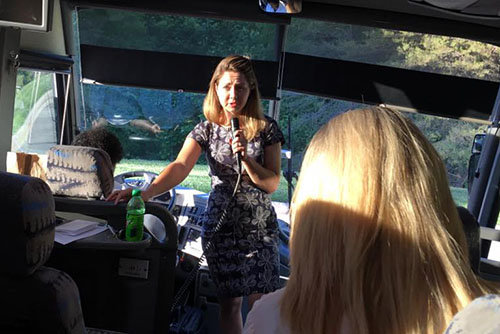 Bethany Walker, who hosted the group on the Unholy Tour, explained how human trafficking has grown to become the second-largest criminal enterprise behind drug trafficking. MIKE GRIFFIN/Special
Posted Wednesday, August 25, 2021 8:47 am
The Christian Index

Bethany Walker, who led a group of Georgia Baptists on what was billed as an "Unholy Tour" of Atlanta, explains how human trafficking has grown to become the second-largest criminal enterprise behind drug trafficking. (Photo/Mike Griffin)

VALDOSTA, Ga. – New to the U.S., Jesmaly Vasquez needed to master English so that she could improve her job prospects.

That’s where Georgia Baptists stepped in, offering classes that allow immigrants like her to quickly learn the language.

When Oscar Coronado arrived in the U.S., it could have been a lonely place except for the people at Redland Baptist Church who welcomed him in.

Meeting needs one person at a time, Georgia Baptists are ministering to refugees and immigrants, a cause being championed by Mission Georgia, a multi-faceted initiative of the Georgia Baptist Mission Board.

Through Mission Georgia, teenage girls forced into prostitution by human traffickers are being rescued. Orphaned children who had been stuck in foster care are getting forever families. Mothers-to-be are getting the prenatal care and counseling they need to deliver healthy babies. Kids who can’t read are getting the educational help they need to not only catch up with their classmates but to excel in the classroom. And immigrants from other countries who settle in Georgia are finding homes, getting jobs and learning English.

“That’s all happening because Georgia Baptists, wanting to help the state’s most vulnerable, are providing the prayer, manpower and funding needed to save and change lives,” said Lorna Bius, mobilizer for Mission Georgia. “It’s thrilling, really, to see how Georgia Baptists are coming together to impact our state.”

Bius said Mission Georgia seeks to provide gospel-centered care in every Georgia community through local churches. But, she said, that can’t happen without financial support.

The Georgia Baptist Mission Board’s website, gabaptist.org, has all the downloadable resources church leaders need to promote the offering, including materials for printing and a series of promotional videos, including one featuring Vasquez and Coronado.

As a state, Bius said, Georgia faces major spiritual battles and Mission Georgia a way to win those battles.

The Georgia Baptist Mission Board points to these statistics:

Two-third of children who do not read proficiently by the end of fourth grade end up on a path that could lead to jail or on welfare.

One million immigrants, including refugees who escaped horrible circumstances, live in Georgia. Many refugees are Christians who escaped dire persecution when they came to the U.S.

Georgia taxpayers spend over $9 million a year for hotel rooms for foster children because they don’t have foster homes or adoptive homes for them to go to.

“The needs are so great all across our state,” Bius said. “Our God is greater than these challenges. By working, giving and praying together, we can meet those needs.”