Georgia Baptists join others on social media during Trump Inauguration 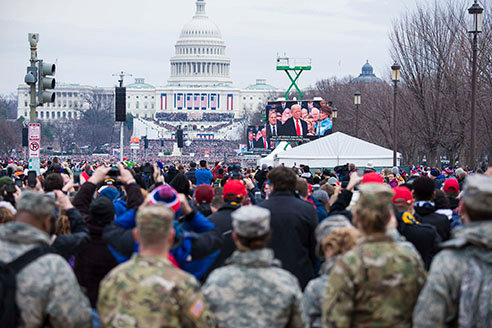 Soldiers and Airmen from the Florida National Guard look on as President Donald Trump takes the oath of office during the 2017 Presidential Inauguration. Florida sent approximately 340 Soldiers to provide support to the U.S. Park Police during the event. CHING OETTEL/The National Guard/Flickr

Social media meant different things for people on the day Donald John Trump became the 45th president of the United State of America.

According to what you read, today was a day of victory and prayer or one of protest and lamentation. Crowds in support of the incoming president made their way to the Washington Mall, even while others struggled to get there amidst protesters actively working to strangle local transit and checkpoints.

Georgia Baptists'  viewpoints on the day were overwhelmingly positive. In addition to words of congratulations to President Trump, many comments pointed to one of the more remarkable aspects of Inauguration Day. Mike Stone, senior pastor of Emmanuel Baptist Church in Blackshear, and Paul Caspers, pastor of Silvertown Baptist Church in Thomaston, addressed the importance.

The topic of prayer remained a common thread on social media. Flintstone Baptist Church posted this reminder on its Instagram account. 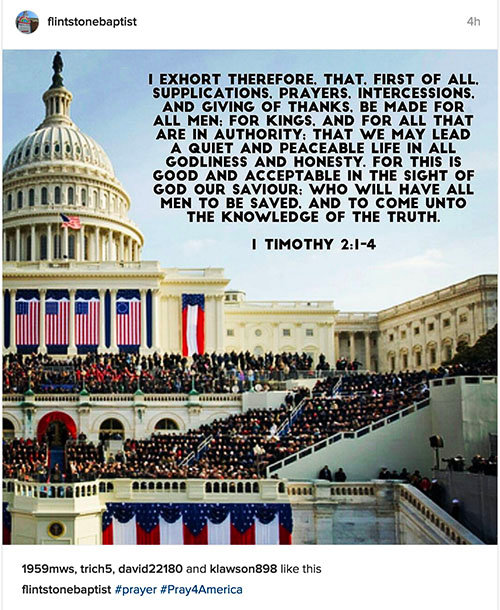 Many offered their prayers not only for President Trump but former President Barack Obama as well as Democratic nominee Hillary Clinton, who was in attendance with her husband Bill. Brad Whitt, pastor of Abilene Baptist Church in Martinez, and Mike Dorough, pastor of Riverbend Baptist Church in Gainesville, acknowledged as much.

Riding a wave of populist sentiment, Trump shocked pollsters in defeating Clinton last November. In his address today, the president acknowledged that support.

"What truly matters is not which party controls our government, but whether our government is controlled by the people," he said. "January 20th, 2017 will be remembered as the day the people became the rulers of this nation again. The forgotten men and women of our country will be forgotten no longer.

"Everyone is listening to you now."