Georgia Baptists are mobilizing to help those who are coping with widespread destruction following the landfall of Hurricane Harvey in coastal Texas.
Posted Saturday, August 26, 2017 7:13 pm
Joe Westbury

Georgia Baptists are mobilizing to help those who are coping with widespread destruction following the landfall of Hurricane Harvey in coastal Texas.

Within hours of Hurricane Harvey coming ashore in Texas as a the most powerful storm to hit the nation in a decade, Georgia Baptists were gearing up to minister to those most affected.

The storm pounded coastal cities around 11 p.m. Aug. 25 as a Category 4 storm and it wasn’t until daybreak when the massive destruction could be documented. By noon today, the Georgia Baptist Mission Board had updated its disaster relief  website and social media links to give churches and laity a portal through which  to contribute. 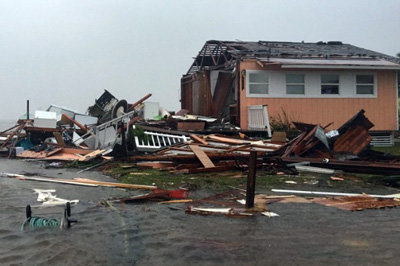 A heavily damaged Texas home emerges from a night of being battered by Category 4 winds. CNN/Special

“At this point all we are doing is soliciting prayer and funds to help those most affected as soon as we are allowed to go in,” said Disaster Relief Coordinator and State Missionary Stuart Lang.

"We are sitting and waiting for Harvey to finish his path as he exhausts his energy. The storm is now down to a Category 1 but there’s not a thing we can do until it runs its course,” he explained.

Lang said he will be waiting for his counterparts in Texas to evaluate the needs and how to respond.

“We know that it is a flood event but it’s too early to know when to respond or even know where the greatest needs are located until after it clears. I will be on the first conference call with state disaster relief coordinators on Monday afternoon to get a better handle on the situation,” Lang noted.

Unless specified, all donations will go into the disaster relief fund “to put boots on the ground and help us minister to those in need.”

Lang said the goal of Georgia Baptist trained volunteers "is to be the best at what we do in feeding, childcare, cleanup, and chaplaincy. We are committed to providing some measure of normalcy for the victims of a disaster event. Our approach to disaster relief is a ministry-based approach to impacting people for the Kingdom of God.”

Donations in increments of $5 can be made by visiting

Lang added that “since this is predicted to be a lingering storm, we are asked not to self deploy or collect any items at this time. We will update the website as needs are known. However, we do not expect to have any further updates until the first of next week.”

He added that 100% of donations will reach those in need.