Georgia Baptists work on partnerships with churches in Central America 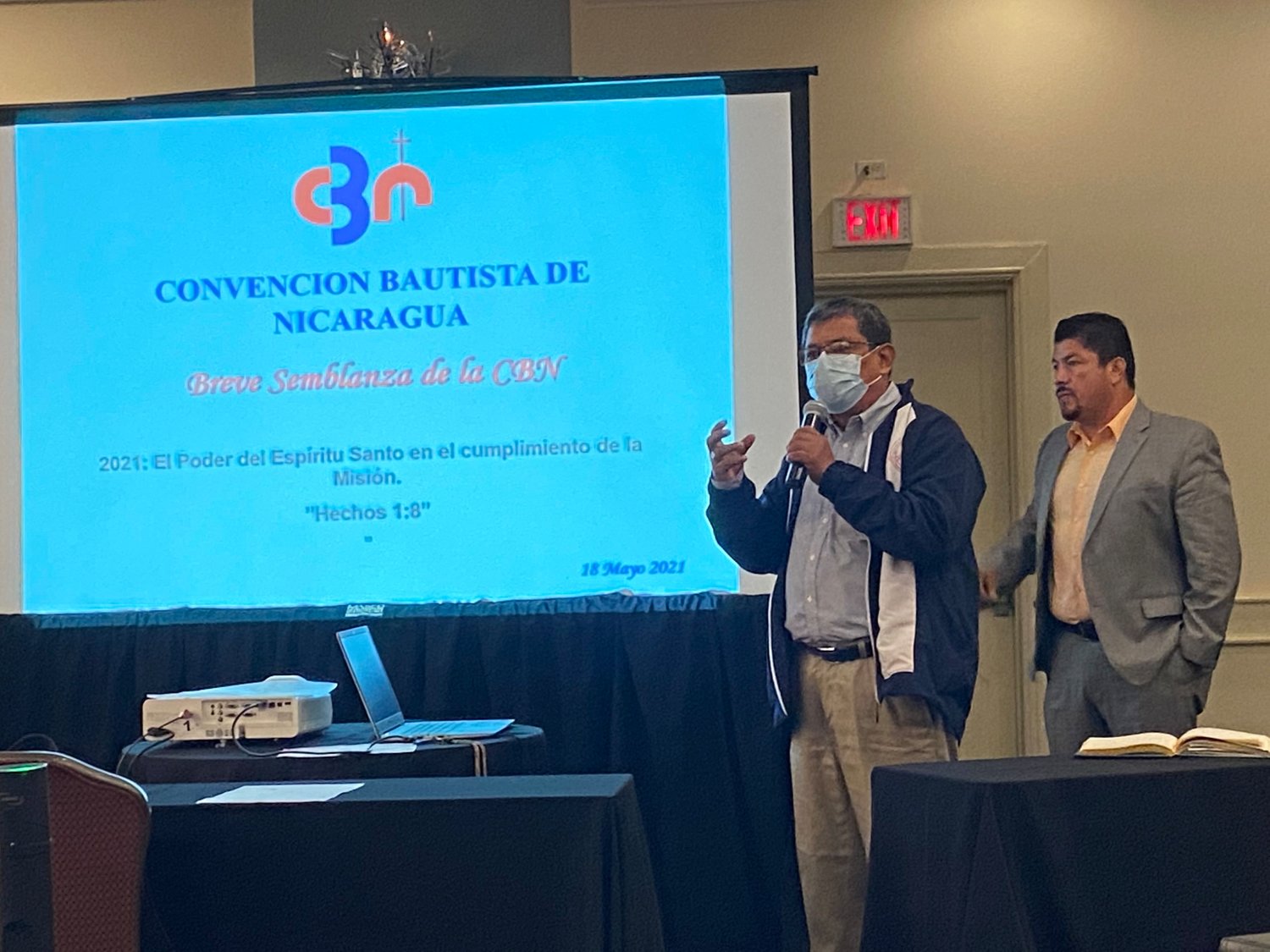 Felix P. Ruiz, president of Nicaragua Baptist Convention, left, and a Nicaraguan pastor speak at a summit in Central America.

Recently Georgia Baptist Convention president Kevin Williams and I had opportunity to participate in an historic meeting between key Baptist leaders of Central America. Birthed out of a desire to unite Central American Baptist Conventions presidents for an accurate picture of the current reality of Baptist work and the need for healthy missions partnerships, the Central America Missions Summit took place in Costa Rica. With an impetus from First Baptist Church of Villa Rica, the group formulated a desire for ongoing long-term partnership with churches from Georgia, Alabama and Tennessee. Present at the meeting were presidents from

As a part of his GBC presidency, Williams is seeking to promote missions to a higher visibility among Georgia Baptist churches and a higher priority for the local church. Williams invited Garry Eudy, President of E3 Volunteers, to attend the Costa Rica meeting. Eudy has been involved in Central America for years, but he described this meeting as “a dream come true.” Having all of the Central American Baptist Convention presidents collaborate on ways to reach the unreached with the Gospel of Jesus Christ is perhaps unprecedented or at least long overdue. Eudy now has offered to help facilitate Georgia Baptist mission teams in short-term trips to Central America. Williams stated, “This whole meeting came about as a vision while in Guatemala, when one of the pastors there told me I could ‘do more’ for the people of Central America.”

GBMB executive director, Thomas Hammond, has adopted the motto “Pastors are our heroes, Churches are our Priority, and Georgia is our Mission field.” But that also means that as the church at home grows stronger, the mission fields become more engaged. There is a broadened expectation for involvement in other regions, states and countries. Accordingly, this meeting among Central American Baptist leaders will open the door to greater opportunities for mobilizing Georgia’s pastors and churches to further the Kingdom of God. The countries represented at this initial summit express a desire to join Georgia Baptists to be on mission with God together. When asked what his key takeaway from the Summit was, president of the Baptist Convention of Guatemala, Salvador Zapateca, said, “I see us coming together collaborating in the Missio Dei (mission of God).”

Demographic shifts, political winds, and errant theology play a role in understanding the current need in Central America. IMB has been involved in those countries for over 150 years, but the makeup of the people groups, their locations and their tangible needs are not the same from the 1800s. A recent IMB article noted how there are still over 300 unreached people groups in Latin America and that the missional efforts today should be focusing more on empowering national believers for the Great Commission than on playing the role of paternal missionaries. That same article mentioned “erroneous theology, dependency on foreign missionaries, and misguided or nonexistent missions practices” as major barriers to healthy North American partnerships. 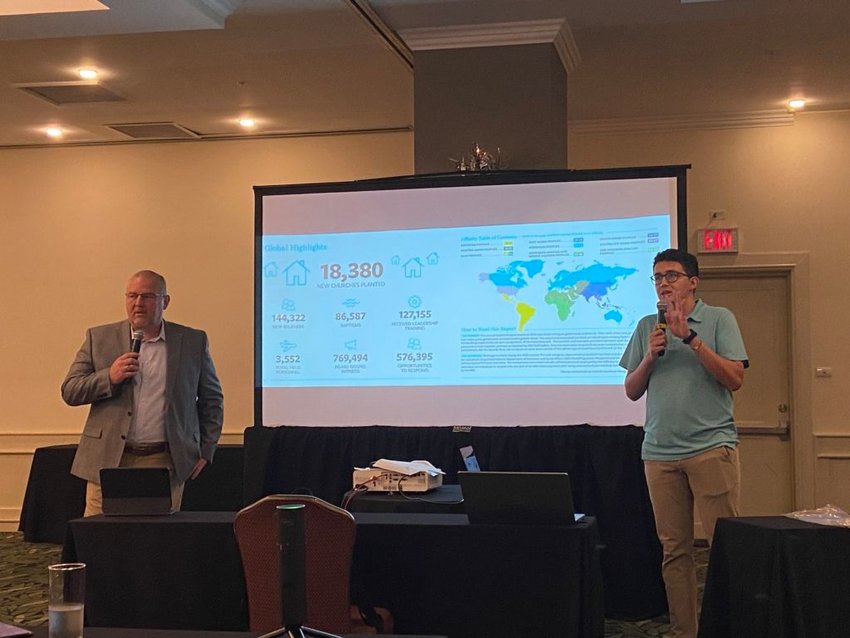 At the Summit, we heard how God is still at work in the respected countries,  but we also heard the hearts cry to unite as one. We heard that the needs are great, especially where lostness is greatest among certain unreached people groups without missional engagement. This drew my heart to pray, “Lord, we need desperately more laborers, but will they come?” We listened to the Baptist leaders explain the need for healthy church leadership development, for theological training of pastors, for basic medical needs, and so much more. Resources are few in Central America, so we agreed to pray for the Lord of the harvest to send more workers.

Just being able to meet together has already brought a renewed hope that God is not done with Central America, that He is still in charge of sending workers to the fields. President of the Baptist Convention of Honduras, Tomas Montoya, described the summit as  “challenging, because we understand that each country here represents unique needs, in its context, that it faces every day- unique challenges and struggles, which we need to jump over like an impala. The Summit helped us to hear God’s voice telling us all, keep going, I am with You”.

An Opportunity for Georgia

As Georgia continues to connect more and more, and pray for and go to the mission fields, we will continue to reach more with the Gospel. At the culmination of the summit, everyone agreed to continue to pray, to partner, to mobilize more short-term missionaries through long-term partnerships to reach more people than ever before. I was totally impressed with the agreement that there needs to be a second Summit to follow up and have more conversations to implement specific strategies for engagement. Moreover, the strategic location of these adjoining countries can facilitate the entry and complementary ministry from multiple vantage points.

In August the missions division of Church Strengthening will host Kevin Williams and Thomas Hammond in twelve key cities in Georgia to promote the vision for local church growth through outward missional engagement. Pastors will be invited to attend these meetings to hear first-hand testimonies of how missions involvement is the basis for numerical discipleship. Williams said, “I know the impact this has had on our church. I believe this is the ‘secret sauce’ to growing a local church.”

The East Central region of Georgia now has a missions partnership with Nicaragua, and the Southeast region has a partnership with Guatemala. When they heard about plans to engage convention churches in those fields for long-term partnership that would result in stronger bodies of believers who are connected to each other locally, the other presidents were just as hungry for that kind of strategic plan in their countries. So the question that looms in front of us is not whether or not God is calling Georgia Baptist churches to go, but will they consider being a unified part of God’s work in Central America.

For more information about how to begin planning for networked engagement in Central America, churches can request a missions consultation through www.gabaptist.org/missions/