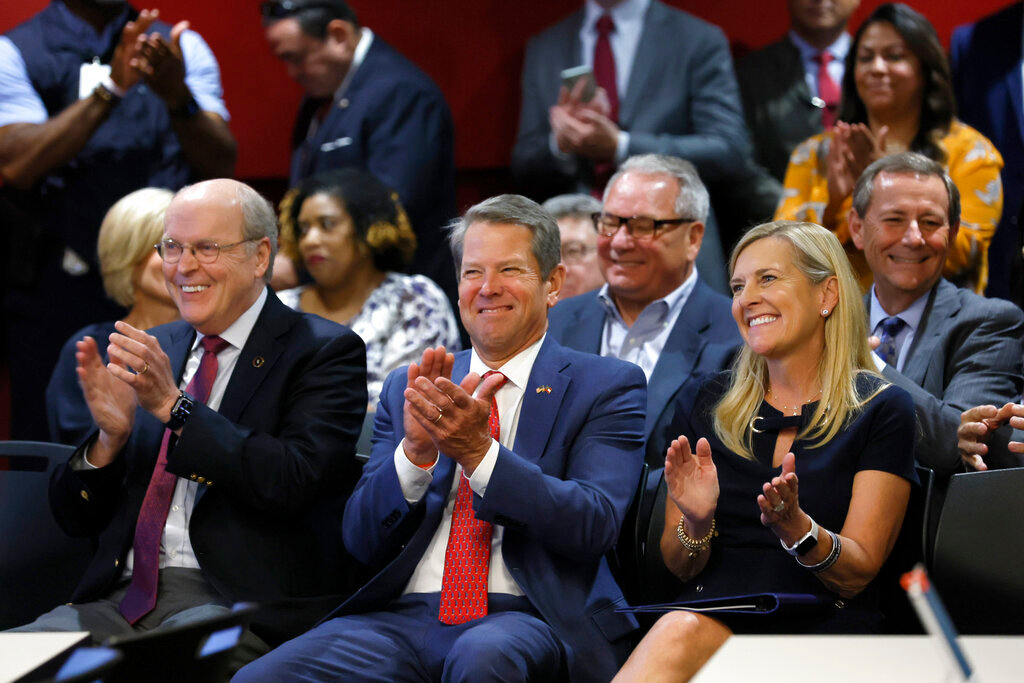 With Atlanta set to become the first two-time host of college football's national championship game in 2025, Brian Kemp sees no reason the Georgia Bulldogs can't be going for their fourth straight title that year — while taking a jab at Atlanta Mayor Andre Dickens.

“As y'all know, Georgia won the national championship last year,” Kemp, a Republican, said at the announcement Tuesday at Mercedes-Benz Stadium. “I believe they're going to repeat this year. Then win the next year. And then we'll see them win their fourth in a row, mayor, in this game.”

Dickens, a Democrat and an alumnus of rival Georgia Tech, then proposed a scenario that might be even more far-fetched than Georgia's four-peat.

“I'm with the governor,” the mayor jokingly shot back. “We can get Georgia back to back to back. Then in 2025, we can have the Bulldogs vs. the Yellow Jackets, y'all, right here for the national championship.

"That would be," he added, fully aware that Georgia Tech has won only nine games in the last three years, "amazing!”

Atlanta reveled in its selection as a repeat host, boasting that it has everything needed to pull off another thrilling event. It previously hosted in 2018 — less than a year after the opening of its 75,000-seat, retractable-roof stadium near downtown.

The College Football Playoff announced the approval of a pair of repeat hosts on Monday. South Florida's Hard Rock Stadium also landed the championship for the second time in 2026, a make-up for its 2021 game being severely hindered by the COVID-19 pandemic.

Atlanta had no such issues in its previous title game, which was played before a packed house and remains one of the most thrilling games in the eight-year history of the playoff format.

“Georgia has a long and proud football history,” Kemp said. “Some of it's good, like last year, and some of it's really bad, like when I was sitting in the end zone during the national championship game, watching that pass from the Alabama quarterback fall into the receiver's hand while with one of my daughters. That was a tough loss, but a great game and a great venue.”

In its short history, Mercedes-Benz Stadium has landed a plethora of big events. The Super Bowl was held there in 2019, and it's set to be one of 11 U.S. host venues for soccer's World Cup in 2026.

It also was scheduled to hold the Final Four of men's college basketball in 2020, but the pandemic forced a cancellation of the season just before the NCAA tournament. Atlanta is expected to make another bid for that event by the end of the decade.

Bill Hancock, executive director of the College Football Playoff, said Atlanta was an obvious choice to get the game again after the playoff completes in 2024 its decade-long commitment to play the title game in different cities around the country.

Hancock also denied reports that Las Vegas was the initial choice for the 2025 game, but had to back out because of a scheduling conflict with a major convention.