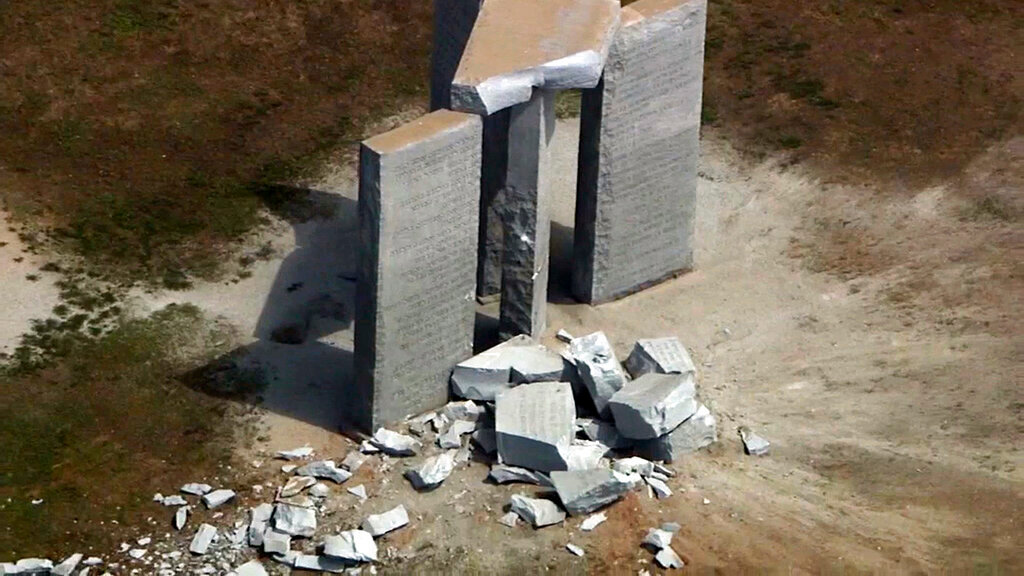 This aerial image shows damage to the Georgia Guidestones monument near Elberton, Ga., on Wednesday, July 6, 2022. (WSB-TV via AP) 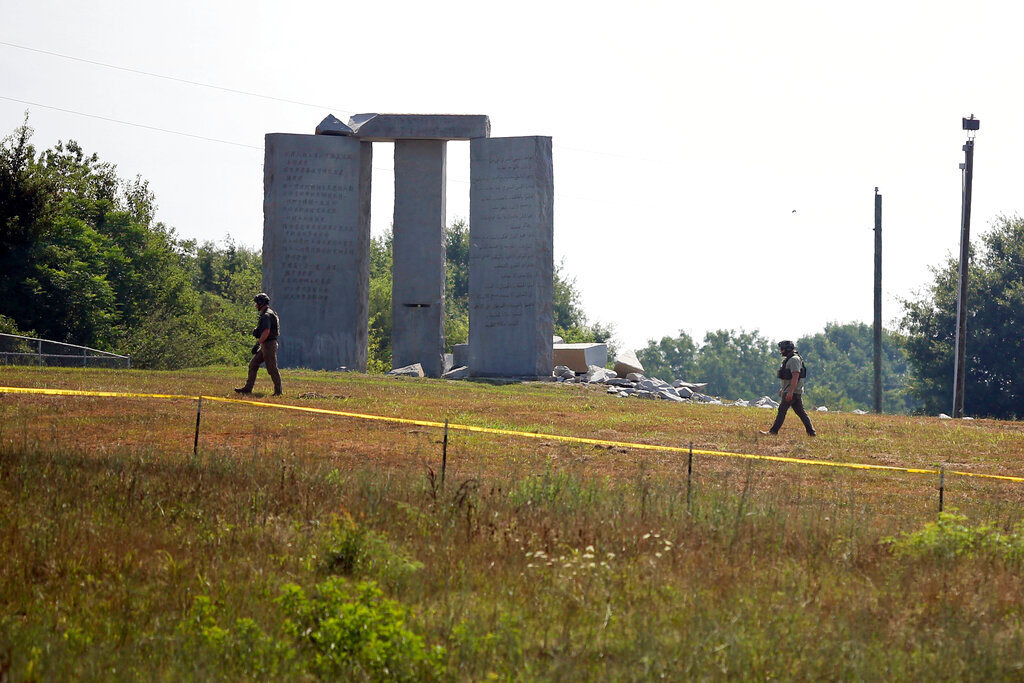 ATLANTA (AP) — A rural Georgia monument dubbed “America's Stonehenge” was demolished Wednesday after a predawn bombing turned one of its four granite panels into rubble.

The Georgia Guidestones monument near Elberton was damaged by an explosive device, the Georgia Bureau of Investigation said, and later knocked down “for safety reasons," leaving a pile of rubble in a picture that investigators published.

The enigmatic roadside attraction was built in 1980 from local granite, commissioned by an unknown person or group under the pseudonym R.C. Christian.

“That's given the guidestones a sort of shroud of mystery around them, because the identity and intent of the individuals who commissioned them is unknown,” said Katie McCarthy, who researches conspiracy theories for the Anti-Defamation League. “And so that has helped over the years to fuel a lot of speculation and conspiracy theories about the guidestones' true intent.”

The 16-foot-high panels bore a 10-part message in eight different languages with guidance for living in an “age of reason." One part called for keeping world population at 500 million or below, while another calls to “guide reproduction wisely — improving fitness and diversity.”

It also served as a sundial and astronomical calendar. But it was the panels' mention of eugenics, population control and global government that made them a target of criticism.

The monument's notoriety took off with the rise of the internet, Kubas said, until it became a roadside tourist attraction, with thousands visiting each year.

Kubas and many other people interpreted the stones as some sort of guide to rebuilding society after an apocalypse.

“It's up to your own interpretation as to how you want to view them,” Kubas said.

The site is about 7 miles north of Elberton and about 90 miles east of Atlanta, near the South Carolina state line. Granite quarrying is a top local industry, employing about 2,000 in the area, Kubas said.

Elbert County sheriff's deputies, Elberton police and the Georgia Bureau of Investigation are among agencies trying to figure out what happened. Bomb squad technicians were called out to look for evidence, and a state highway that runs near the site was closed for a time.

No suspects were identified.

Kubas said local officials and community leaders will have to decide who, if anyone, pays for restoration.

“If you didn't like it, you didn't have to come see it and read it," Kubas said. “But unfortunately, somebody decided they didn't want anyone to read it.”