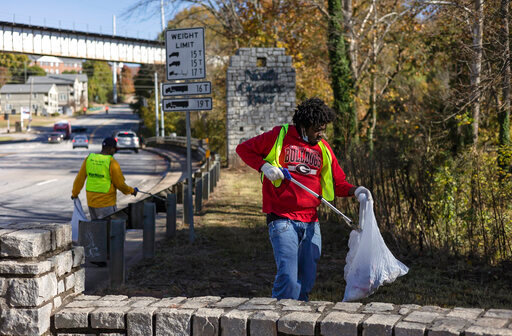 John Dye, 42, and Randy Jones, 24, right, walk along the intersection of North Avenue and Willow Street picking up trash as part of A Safe and Clean Athens program Friday, Nov. 12, 2021, in Athens, Ga. It provides a positive way for those in the homeless community to make some money, instead of doing something negative, Jones said of Sparrow's Nest's program. (Kayla Renie/Athens Banner-Herald via AP)
Posted Sunday, November 21, 2021 11:40 am
By DJ SIMMONS, Athens Banner-Herald

ATHENS, Ga. (AP) — On a brisk Friday morning, a small line has gathered outside the Sparrow’s Nest on Prince Avenue.

Inside, people are already gearing up to clean the streets as part of a program called A Safe and Clean Athens. Sparrow’s Nest, a Christian ministry serving those in need, sees the benefits of the program as two-fold: providing the homeless work for pay while also cleaning the city.

“One of the things I think people can all come to common ground on is if some of the homeless are willing to work for these couple of hours, then that’s a win for everybody,” said James Scott, executive director of Sparrow’s Nest. “It’s a win-win. A win for them, and also for the community in keeping Athens safe and clean.”

Currently, the initiative pays members of the homeless community $10 an hour for around two hours once a week, and typically opens to the first 10 people to arrive at Sparrow’s Nest.

Scott said the program has been running for over a month, but they are hopeful to expand it.

“We want to increase it to two to three hours, or two to three times a week, or three to four hours, either-or to be able to give people opportunity,” he said.

Through expanding the program, Scott said, there’s hope that it can lead to building leadership and additional opportunities for participants.

“My long-term hope is that we can begin to, because I’m in ministry, make disciples,” Scott said. “The guy who is picking up today, hopefully, he can be the guy when we move to 20 to be over a group of people.”

The idea behind the initiative came one Saturday evening when Scott went to grab a pizza for his grandkids from Little Italy. On his way downtown, he saw a man cleaning up trash on the streets.

But caught in the throes of traffic, he couldn’t stop to thank the man, Scott said. But on his way back, he saw the same person.

“I went to roll my window down and I said ‘Sir, thank you,’ and he turned around and it’s (Athens-Clarke Mayor) Kelly Girtz,” Scott said.

After seeing what the mayor was doing, Scott started wondering what more could he do to help the community. The thought led him to propose the program to Girtz.

And since the program’s inception, those involved are already talking about its benefits.

John Dye, 42, said he first heard of Sparrow’s Nest through others in the homeless community. Dye, originally from Wilkes County, said he makes sure to come to the program every Thursday.

Dye said he was thankful for Scott, Sparrow’s Nest and the help they were offering by allowing people to work for pay.

“Sparrow’s Nest really helps people out the best way they can,” Jones said.

He said the program provides a positive way for those in the homeless community to make some money, instead of doing something negative.

“This is my first time, but I’ve seen so many people doing it,” Jones said. “I see so many people going so I said this morning, ‘I think I’m going to try this today.’”

For Scott, the budding program can also help build positive habits. He said if people do things enough, and repeatedly, even on days when some may not be working, they will continue to think about keeping the city clean.

“I want it to catch fire and become contagious ... if possible,” Scott said.