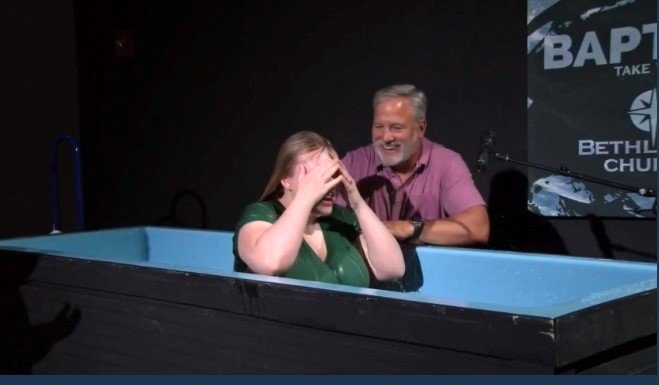 BETHLEHEM, Ga. – As pastor of one of Georgia’s most evangelistic churches, Jason Britt is accustomed to lots of baptisms, but 114 on a single Sunday was beyond even his expectations.

“We were blown away,” said Britt, lead pastor at Bethlehem Church. “It’s one of those things you don’t get to do every week, and you’re just grateful when God opens the door to do it.”

Bethlehem Church, with Sunday attendance of about 4,000 on its three campuses, is routinely one of Georgia’s top baptizing churches with 200 or more yearly since 2018.

On Sunday, 26 new believers at Bethlehem’s three campuses were scheduled to be baptized. However, others spontaneously made their way to the baptistries as well.

Britt said the church experienced one of those spiritual moments that can’t be manufactured, that can only be instigated by God.

“It’s like with Elijah,” he said. “We don’t bring the fire; we just stack the wood. Our job is to just be obedient.”

J.J. Washington, evangelism catalyst at the Georgia Baptist Mission Board, said the mass baptisms show that Bethlehem Church has made reaching people with the gospel a priority.

“It demonstrates that God is still at work, even in the midst of a pandemic,” he said. “The church is prioritizing the importance of people taking their first step of obedience.”

Washington said Bethlehem Church’s experience should be encouraging to other churches, “for there is no respect of persons with God. Therefore, He is willing to do what He did at Bethlehem Church in any church that is willing to commit to make the advancement of the gospel, above all, their top priority.”

Britt said 20 additional new believers are scheduled to baptized next Sunday, which will bring the number of baptisms at the church to more than 200 so far this year.

In the emotional service last Sunday, some of the new believers wore beaming smiles; some shed tears of joy; some raised their hands in praise as they made their way into and out of the baptistries.

“Baptism is the symbolic picture of being buried with Christ in his death as we go under the water,” Britt explained. “And when we come up, it’s a picture of being made alive and new in Christ.”

In a Sunday evening service, as the final new Christians were being baptized, Britt explained how thrilling the day had been for him.

“It’s been one of those days you get in ministry for,” he said. “God is still changing lives. God is still moving mountains.”