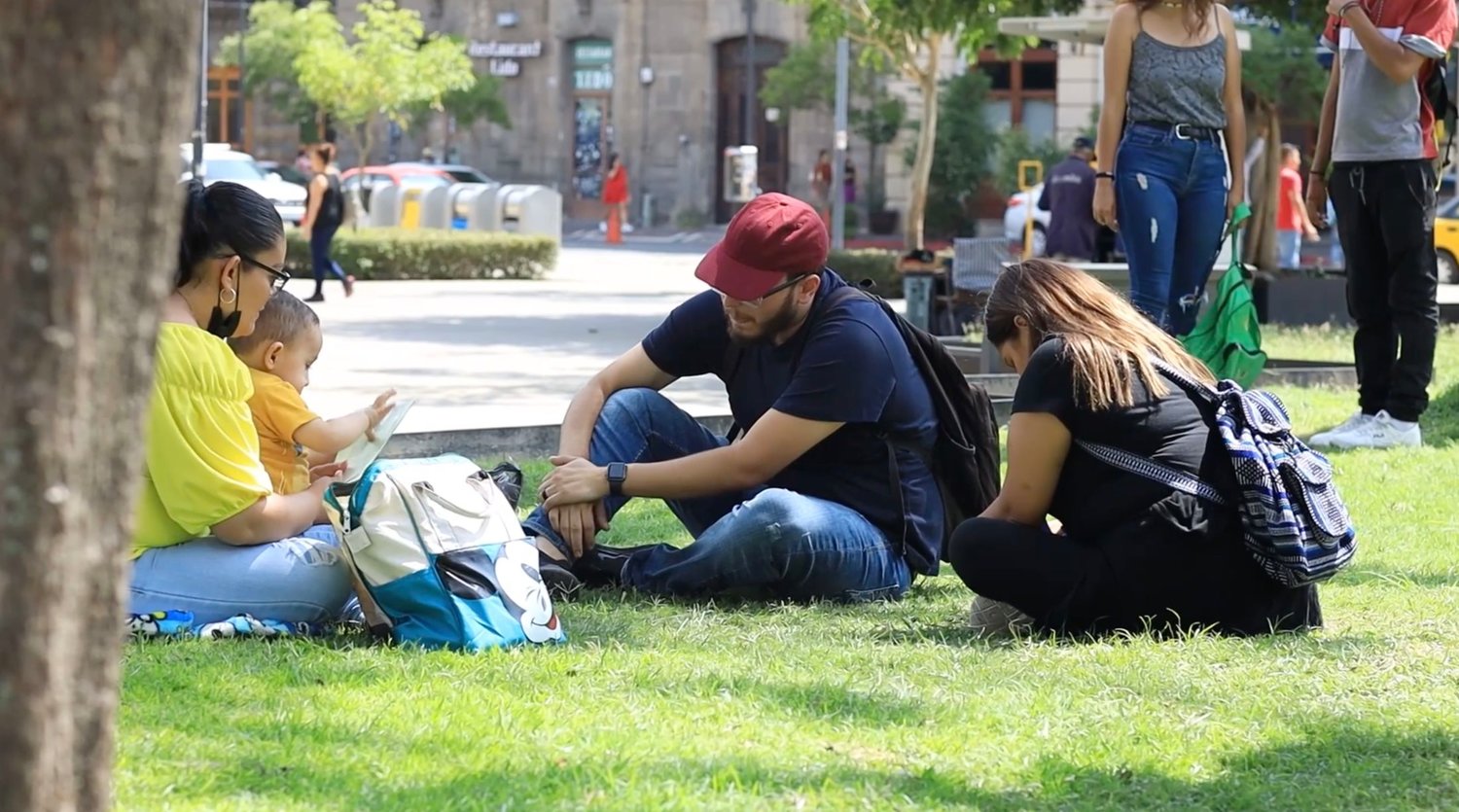 Danny and Desiree Buitrago share Christ with a woman in a downtown park during a GoIMPACT mission trip to Guadalajara, Jalisco, Mexico. (Photo/International Mission Board) 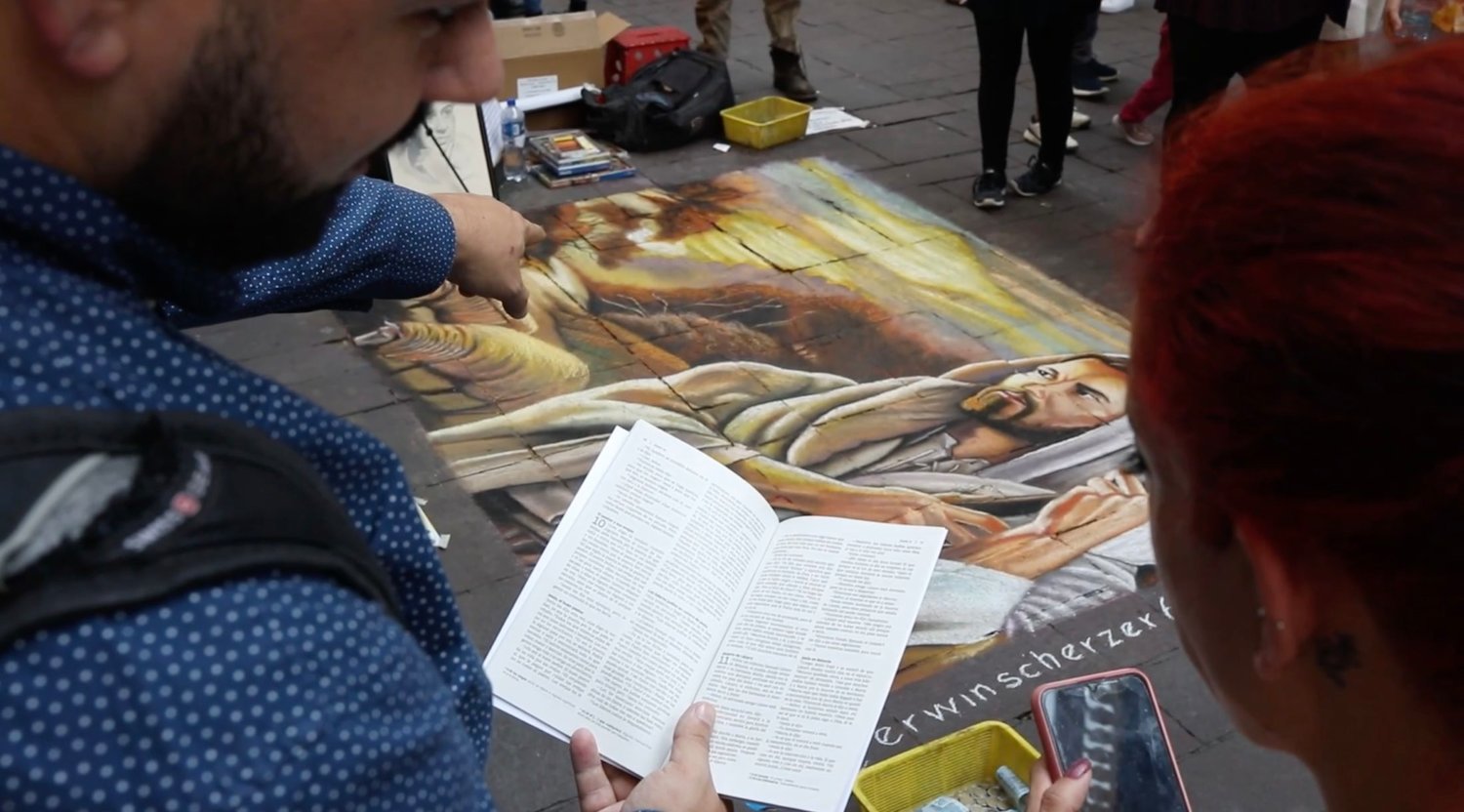 The GoIMPACT team from Florida partners with a world-renown chalk artist to share the story of the Good Shepherd as he draws. (Photo/International Mission Board) 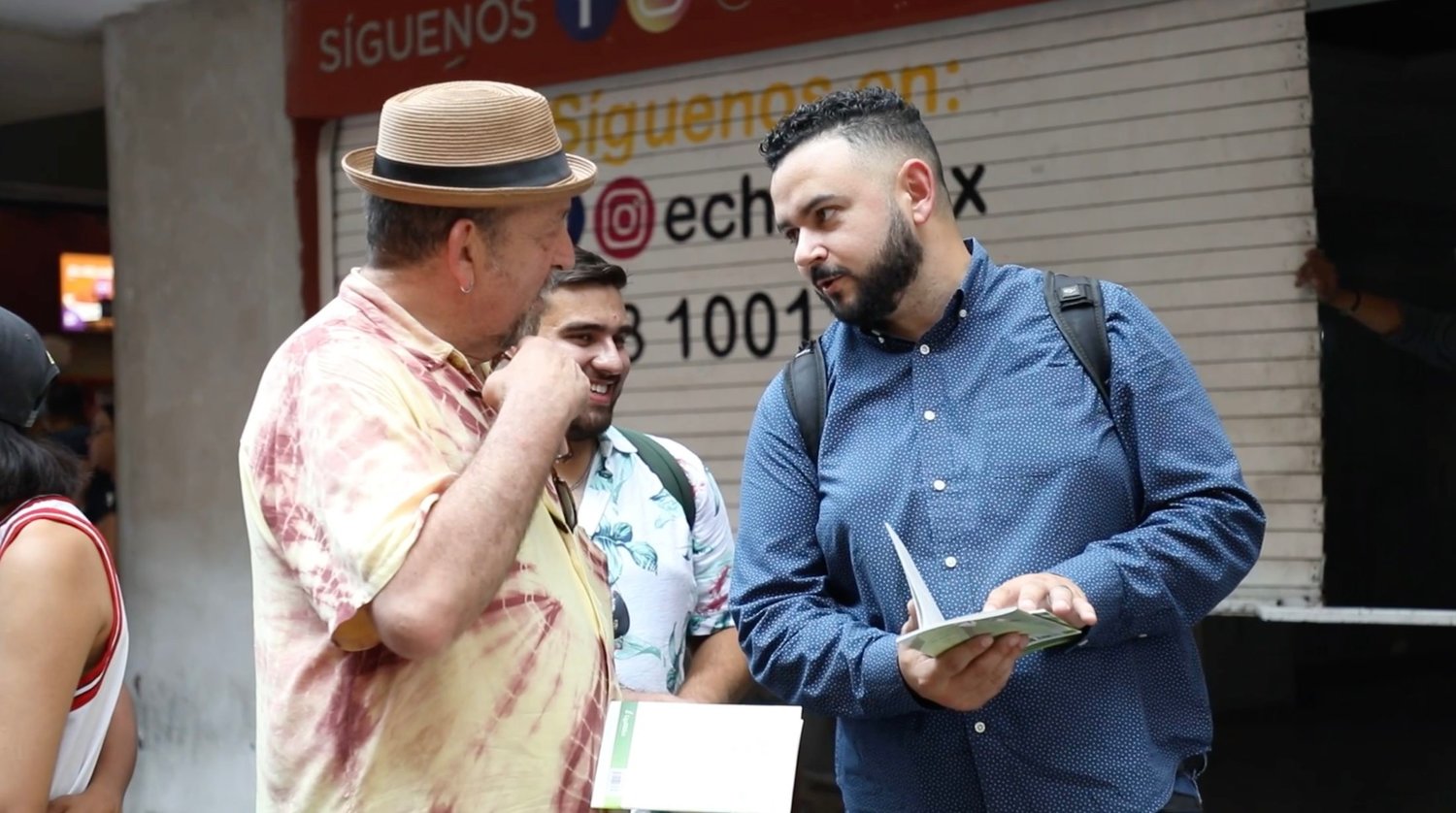 The task for the day was sharing the gospel – with total strangers.

Talking about Jesus in public can be intimidating for some, but Danny Buitrago was up for the challenge. On a GoIMPACT mission trip in Guadalajara, Jalisco, Mexico, Buitrago, and his team walked into a local park. When Buitrago approached a man standing by a tree reading a Bible, he thought this would be an easy conversation, but the stranger told him to go away.

Buitrago was not deterred, and it’s a good thing he wasn’t. In the same park, he greeted an 82-year-old man named Eduardo or “Lalo” who told Buitrago he was just sitting there waiting to be put in his casket. Buitrago was able to share the gospel and he and his evangelism partner for the day, Alejandro Garcia, prayed with Lalo as he gave his life to Jesus. Throughout the trip, they spent more time getting to know Lalo and discipling him in his new faith.

Lalo’s eternity was transformed because two Florida Baptist churches came together, sending their youth group, or in this case a group of young adults, on a mission trip to serve with International Mission Board missionaries in Guadalajara. They reinforced key facts about missions: reaching the nations can be accomplished together; short-term trips have long-term value, especially with a minimal language barrier; and the next generation is key in reaching the lost.

A team from Iglesia Bautista Ebenezer in Belle Glade, Florida, consisted of two college students and one high schooler, all on their first mission trip. The students partnered with nine members of Peters Road Baptist Church in Plantation, Florida, many of whom were also on their first or second mission trip and were young adults as well. The team was led by Mike Pileggi, associate pastor of Peters Road.

While typically a GoIMPACT trip is aimed at high school students, two Hispanic churches, who have a generally broader definition of a youth group, were mobilized, George Siler, IMB’s manager of volunteer programs, explained. He added, “This NextGen Hispanic mobilization is a breakthrough for us.”

Together, the team spent a week serving with Dan and Margie Potter, IMB missionaries.

Another unique aspect of this mission team, and something that made their ministry so effective, was that all but one member of the team spoke Spanish.

Margie pointed out that the team saw a “conversion rate of 28.5%” when they presented the gospel. This refers to the percentage of people who accept the gospel after hearing it clearly explained. Margie explained that the team’s success was as strong as any evangelical missionary who shares the gospel in this area of the Americas.

In El Centro, the team laser-focused on street evangelism.

They were asked to go to three different parts of the area and share Christ with people they met throughout the day. They also invited people to have lunch or dinner with them during those days. As the team carried out their mission, the Hispanic short-term missionaries from Florida went out in twos, sitting and listening to people, sharing the gospel, and connecting – some sitting on park benches, some on the grass, others standing in the hot sun.

Eréndira Sedano, a translator for the non-Spanish speaker on the team, said that what the team did was such a great opportunity for her country and her people.

“God is having mercy on Mexico. Our culture is open and ready to listen. You are focused on eternal life. Thank you for what you are doing for my country,” she gushed.

Margie added, “It boggles my mind and proves that as a territory, we need not only the training and passion that they came in with, but we also need that language because they were able to get to the gospel!”

As missionaries, the Potters were encouraged by the team. “We want to emulate what we saw in these young adults. I loved what Mike prayed last night, ‘Lord, we don’t need a Pentecost moment, we need people who can speak Spanish to come here.’”

The team participated in other evangelistic events, including partnering with a chalk artist to share the gospel through drawings on sidewalks and other public outdoor surfaces. Erwin Scherzer, a world-renowned madonnari artist (sidewalk chalk artist), who practices his craft in Guadalajara, chalked the “Good Shepherd.” Surprisingly, Scherzer is not a believer, despite the Potters’ ongoing relationship with him and their consistent sharing of the gospel with him.

Nevertheless, he joyfully works with the Potters on events like this, because it is “for a good cause and Dan and Margie are good people,” he said. The Potters, and now the entire Florida mission team, are praying for Scherzer to come to know the Lord he helps the Potters and their friends proclaim.

After the first day, Marqui Cambronero shared his experience. Since he does not speak Spanish, he used a translator, making his experience different from the others.

“I was nervous as I am the only one that doesn’t speak Spanish,” Cambronero said. “Praying through John 10 this morning was excellent! I had about 30 conversations and six [people] came to Christ. The Holy Spirit moves even through a translator!”

As the team reflected on their experience, Mayra Juarez added, “Only God could have done what we did today!”

They also spent their time doing other forms of street evangelism and being intentional to follow up with new converts, beginning the discipleship process. That was key to their goals during the week.

Juan Cristobal found street evangelism more natural by using a survey to help get started. “What do you think about God, the world and the future? Do you think there is hope?” Using these questions as gospel conversation starters, he found people were more receptive to listening to him present the gospel.

In general, though, the team found the people they spoke to hungry to hear hope.

“What [many] Hispanic churches don’t see is the benefit of having the logistics and everything handled by the IMB,” Pileggi said. “I guess that’s why this trip is so unique in that sense.”

Pileggi continued, “Hispanic churches are just doing it alone rather than together with the IMB. The Southern Baptist Convention pulls resources together for the purpose of bringing churches together to go on mission.”

In addition, the Florida Baptist Convention is focusing on not just sending, but also mobilizing the next generation. “Their motto is ‘Right Beside You’ and they really do come alongside you. Every church that gave to the Florida Baptist Cooperative Program was a part of this trip,” he added.