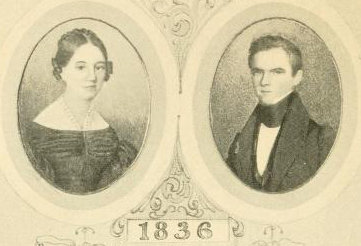 . . .  present your bodies as a living and holy sacrifice, acceptable to God, which is your spiritual service of worship. (Romans 12:1)

It was called a “living funeral,” a rare occurrence not to be easily forgotten.

People had gathered on the docks at Salem, Massachusetts in October 1837 to bid farewell to three young missionary couples departing on the morning tide. Sailing on the ship the Rosabella, they were bound for the Baptist mission in Burma. The ship’s cargo included five new printing presses and the paper for the first printing of the Burmese Bible. The voyage would take them east across the Atlantic, around Cape Horn at the southern tip of Africa, before turning north across the Indian Sea to Burma.

After a journey of four months the ship finally arrived in the port city of Myanmar There was excitement, joy, and anticipation when the Rosabella docked. The ship’s captain was particularly eager to know how the three missionary couples the Rosabella delivered the previous year were fairing. The news was not good . . .  attitudes quickly changed. The harsh reality of foreign missionary life wasted no time in greeting them. Three of the six missionaries arriving the previous year had not survived.

Their departure from Massachusetts was called a “living funeral” because about half the early missionaries died within the first two years on the mission field. The news only confirmed their worst fears. The missionaries and those bidding them farewell on the Salem docks four months earlier knew there was a good chance they would never see each other on earth again.

One of the couples was 23-year-old Edward Abiel Stevens and his 20-year-old wife Elizabeth Lincoln Haven Stevens. They had been married less than a month when the journey began at the Salem docks. Edward was a native of Sunbury, Georgia, and Elizabeth was from Boston. Edward was the first southerner to serve under the Triennial Baptist Foreign Mission Board. One historical researcher in the 1970’s wrote of the Steven’s family, “someone needs to find out what happened to them because no one seems to know.”

Born in 1814, Edward was the fifth of seven children of Oliver and Eliza Stevens. His parents had only recently been converted in one of the waves of revival which swept America during the Second Great Awakening. His birth took place the same year the Triennial Baptist Convention organized to support missions in Burma. Shortly after their conversion, Oliver and Eliza heard Luther Rice speak on Burma missions; it made a deep, lasting impression on them.

Young Edward proved to be an exceptional scholar with a gift for languages. Following his conversion at age 14, he was sent north to continue his education at Brown University in Providence, R.I. graduating with honors in 1833. He then lived with the family of his maternal aunt and her husband Dr. Henry J. Ripley D.D. a professor at Newton Theological Institute, Newton Center, Massachusetts while attending that institution, graduating in 1836. 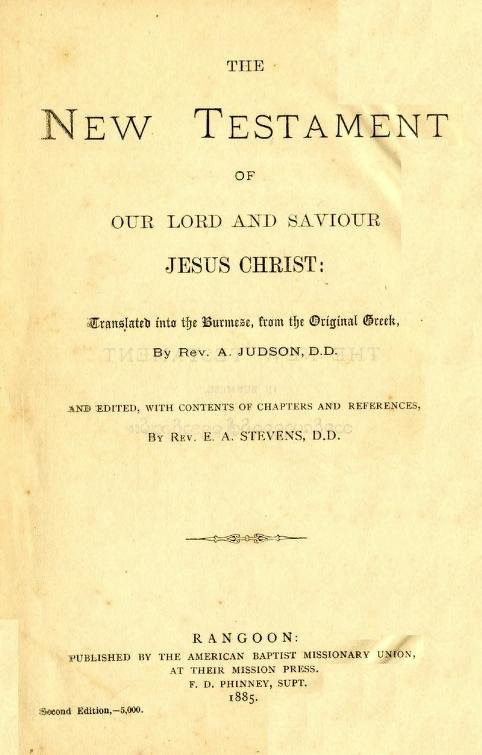 As a student Stevens had a spiritual experience that seemed to confirm and deepen his conversion made before leaving Georgia. He developed a strong prayer life developing the habit of going to pray on a knoll near the campus. He was seen coming and going so much that other students began to refer to it as “Stevens’ Knoll.”

Following his graduation in 1836, he was commissioned by the Triennial Baptist Board of Foreign Missions and became engaged. Both Edward’s and Elizabeth’s applications for missionary service stated it was “missionary intelligence” which had been a major factor in the call to missions. “Intelligence” was used then as the word “news” is used today. It was the testimony of what God was doing on the mission field that drew them to heed God’s call. Following his graduation and commission Stevens returned to Georgia to raise support.

The year 1836 was significant for Georgia Baptists. After years of conflict and division, a final meeting attempting to maintain Baptist unity concerning missions took place. The Primitive Baptists chose not to attend and declared “non fellowship” with all who supported missions and education. Arminian Freewill Baptists attended and while sympathetic with supporting missions decided to separate peacefully because they could not accept the Calvinist theology of the Georgia Baptist Convention. The Calvinist Missionary Baptist (GBC) began putting the conflict behind and renewed their effort to support missions and education.

Following years of bitter conflict, it was as if Missionary Baptists were ready to ask . . . “who shall we send?” It was in this context that young Stevens returned to Georgia and said, “here am I send me!” His arrival after the long struggle was a gift the missionary Baptists of Georgia needed, it helped them renew their focus and purpose.

Stevens, with his travel schedule published in The Christian Index, travelled the state for the next year preaching missionary messages to raise support. When the GBC met at the Van’s Creek Baptist Church in May 1837, Stevens was ordained by the church on Sunday morning at the request of his home church in Sunbury. The GBC Minutes recorded; “almost every eye wept, and the breathing of many pious souls was poured forth that the blessings of God might abide with him at home, amid the dangers of the ocean, and in the dreary and desolate field for which he is destined.” Jesse Mercer, who had helped pay for Stevens’ education, preached the ordination sermon. At the day’s end, the clerk summarized by recording; “and a general good feeling prevailed.”

In Burma, the Stevens family did survive that first year and many more. Edward Stevens served as pastor, evangelist, professor, and translator. Arriving at their new home in Rangoon they met their next-door neighbor and colleague, Adoniram Judson. The Stevens family shared the loss of their home and possessions with Judson when an arsonist lit fire to the missionary compound in the middle of the night. Elizabeth Stevens who took over the care of Judson’s infant son after his second wife’s’ death in 1844. Stevens worked with Judson and following Judson’s death finished editing the final edition and notes of the Burmese Bible.

Furthermore, Elizabeth wrote that it was the Stevens family who helped introduce music to Burmese worship. She indicated Judson and some of the early missionaries could not sing, and that music was generally associated with the secular theater in Burma. After the later arrival of missionaries with musical skills they had a difficulty incorporating music into worship because of opposition due to association with the secular theater. Edward not only incorporated music into worship, but he also translated hymns and was credited with writing several included in the Burmese hymnal.

In 1854, the Stevens family which now included 6 children, returned to America for their first furlough. At that time Stevens communicated with SBC Foreign Missions Board President, James Taylor about receiving support through the Convention while continuing to work in Burma. Taylor was open to the arrangement but the Northern Board because of ongoing tensions decided it would not be feasible. The only way Stevens could return to his work in Burma was to remain under the northern board.

Stevens returned to America again in 1874. He visited Georgia and was recognized as a guest at the Georgia Baptist Convention. It was on this trip that he heard an interesting story while visiting an old friend of his late mother. She told him that shortly after his parents’ conversion, they heard Luther Rice speak on Burma missions as he was raising support for Adoniram Judson. Stevens parents were deeply moved. Sometime later when their pastor came by, they asked him to pray with them, specifically they wanted to dedicate their new son to be a missionary to Burma. It was the first he had heard the story which had taken place 60 year before. His missionary call began with his parents’ prayer. Although his parents had not “raised” him to be a missionary they were ready to support him when God called.

After returning to Burma, he continued serving in several capacities before his death in 1886, one week shy of the 50th anniversary of his commission by the Mission Board. Of the six young people who sailed on the Rosabella in 1837, all survived and had long ministries. Edward was preceded in death by only one of them just a few months before his own death, the rest served for 50 years or longer. They all had, in the face of the harsh reality of early missionary life, heeded the call, experienced a living funeral, and became “living sacrifices,” laying down their lives over many years of service far from home.

The following appeared in the Christian Index following his ordination in 1837; “Indeed, the departure of Brother Edward Stevens, Missionary to Burma . . .  is an era in the history of the denomination in Georgia, it should never be forgotten.” Yet as the researcher in the 1970’s indicated; it was forgotten.

As Georgia Baptist approach the 200th Anniversary of the founding of the GBC in 1822, it is important not to forget! The GBC organized and survived in the face of early bitter opposition, to support missions and missionaries and educational systems to prepare them for service. It is important to remember that God still calls His children to service today to faraway lands and much closer to home. For there have been many who have and are still living sacrifices today. Laying down their lives in service. It is Georgia Baptists collective call to support them as they serve. “It should never be forgotten.”