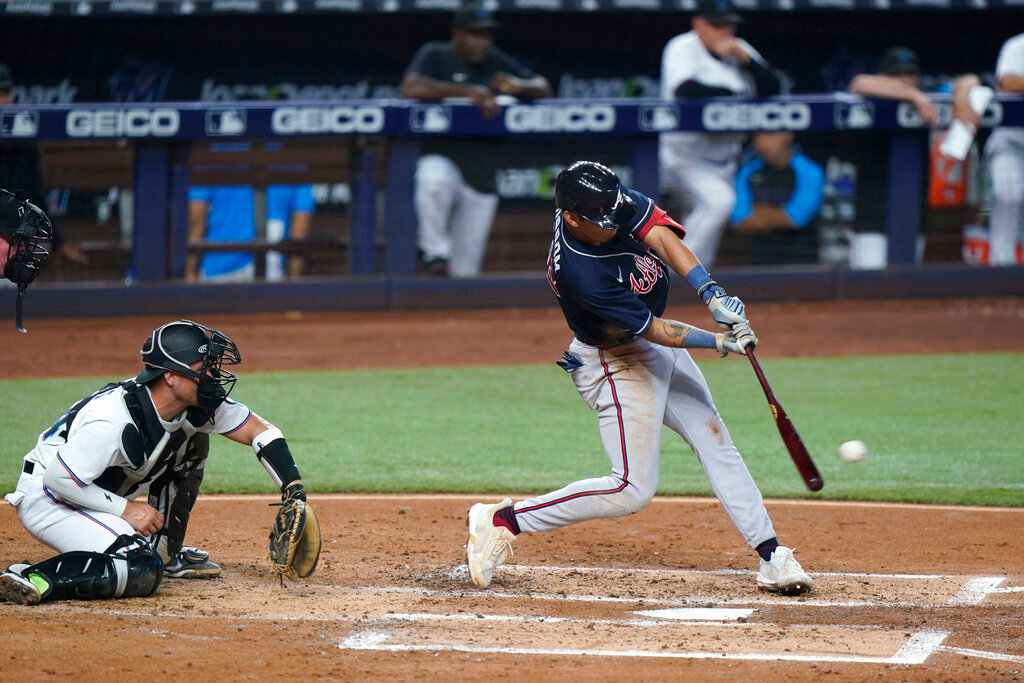 MIAMI (AP) — Rookie Michael Harris II hit a tying homer in the ninth, William Contreras had a go-ahead single and the Atlanta Braves rallied to beat the Miami Marlins 3-1 on Sunday for a sweep of their four-game series.

The Braves won their sixth straight after losing four of five against the NL East-leading New York Mets.

Harris’ leadoff shot in the ninth tied it at 1-all. He drove the first pitch from Marlins reliever Tanner Scott (4-5) over the wall in left center for his 12th homer.

“I was looking for a good pitch to hit and I got it,” Harris said. “I was trying to do anything I could to get on base to help us get a win. I’m just glad we got the win.”

Dansby Swanson followed with a single and Vaughn Grissom walked. Austin Riley flew out to right before Swanson got caught in a rundown between second and third for the second out. Scott then walked Matt Olson and Contreras hit a hard grounder that second baseman Jon Berti deflected but couldn’t retrieve in time to throw out Grissom at the plate.

Braves All-Star outfielder Ronald Acuña Jr. did not start but pinch hit in the ninth and was intentionally walked. Olson advanced to third on the walk and scored on a wild pitch by Scott.

Acuña was removed late in the second game of Saturday’s doubleheader as a precaution to rest his surgically repaired right knee. After his pinch-hit appearance, Acuña played right field in the bottom half.

“His knee was sore (Saturday) night. He came in, got treated up and was ready to go,” Atlanta manager Brian Snitker said. “He told me after he pinch hit, ‘I’m going to play the outfield.’ It’s good to get him off his legs.”

The Marlins have scored three or fewer runs in 15 consecutive games, matching the 1979 Chicago Cubs for the second-longest drought in the division era.

The club also has been without injured All-Star infielder Jazz Chisholm Jr. and offseason free agent acquisitions Jorge Soler and Avisaíl García during its scoring slump.

“Our lineup is obviously not what it was earlier with Jazz, Soler and Avi and all the guys that we’d have at a normal standpoint,” Marlins manager Don Mattingly said. “I think the one thing we do see in this is our pitching keeps us in games.”

Tyler Matzek (3-2) threw a scoreless eighth and Kenley Jansen got three outs in the ninth around a single for his 27th save.

“We had a bad weekend and ended up having a really good road trip,” Snitker said. “Hats off to all the guys just for turning the page, staying with it and taking care of business.”

Atlanta starter Bryce Elder struck out a career-high 10 in seven innings of one-run ball. The 23-year-old Elder, who was recalled from Triple-A Saturday, allowed three hits and walked two.

“At the end of the day, giving the team a chance to win is all you can ask for,” Elder said.

Elder began the season with the Braves and made four starts before being sent to the minors.

“When I was here before I was a little bit passive,” Elder said. “I think this one kind of shows if you make good pitches, you’re going to have success for the most part.”

“I messed that whole game up right away when I gave up a home run to Harris right down the middle,” said Scott, who has squandered five of his 21 save opportunities.