HONOLULU (BP) — Praying, sharing the Gospel, and contacting loved ones were among Hawaii Baptists' reactions when a mistaken alert message Jan. 13 said a ballistic missile could strike them within minutes.

Shortly after 8 a.m. local time, the Hawaii Emergency Management Agency sent an alert to cell phones on the islands stating, "Ballistic missile threat inbound to Hawaii. Seek immediate shelter. This is not a drill." A television banner added, "A missile may impact on land or sea within minutes."

State government officials revoked the alert after 38 minutes, according to media reports, and later said the message went out because of human error. But amid heightened tension with North Korea, some Hawaiians and tourists thought their lives could end within the hour.

At the University of Hawaii in Honolulu, students living in dormitories went to the nearby house of Baptist Collegiate Ministries (BCM) director Arjay Gruspe when they received the alert. He led them to take shelter in the BCM offices, which are partially underground, until the all-clear was given.

BCM associate director John Allison told Baptist Press his first thought was to call his parents in Oklahoma. Then he thought of a Japanese friend who had agreed the previous day to start studying the Bible but had not received Christ as Lord and Savior.

"I was praying, 'Lord, don't let die so he can still hear about Jesus,'" Allison said. "I had shared the Gospel with him before, but made it so immediately real."

Craig Webb, assistant executive director of the Hawaii Pacific Baptist Convention, had just finished washing his car when a neighbor relayed the alert. Webb called the family of an HPBC colleague, who was out of the state, to check on them and pray with them. He said he felt "a peace" and didn't realize until later "how upset everybody else was."

Hiking with international students later that day, Webb used his experience to give a Gospel witness.

"I shared with them my experience about the peace I had," Webb said, "knowing that should we really be vaporized or killed somehow, because of the blood Jesus shed and by receiving the free gift of His salvation, we would spend eternity with Him."

Andrew Large, pastor of Waikiki Baptist Church in Honolulu, told BP he had an intuition shortly after receiving the alert that it could be a false alarm. When church members contacted him for counsel, he told them to stay where they were rather than rushing to what they perceived as safer locations.

One Waikiki Baptist member was on the phone with her sister on the mainland after the alert sounded. When the call dropped, her sister feared she had been killed, Large said. However, they reconnected minutes later.

Large plans to use the false alarm as an evangelistic opportunity in the days ahead.

"It has given us a cool way of being able to talk about, 'What would have happened to you if you were in the impact zone and you died?' Everybody is talking about it. So in the course of the discussion, it gives us a way of bringing Christ up," Large said.

Kentucky pastor and Southern Baptist Theological Seminary professor Hershael York was vacationing with his wife and 85-year-old mother on the Big Island when the alert came. 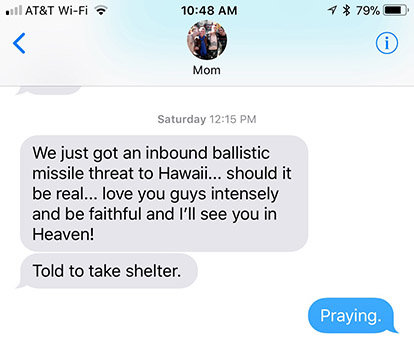 Tanya York, a Kentucky pastor's wife vacationing in Hawaii, texted a potential goodbye message to her sons and their families after she received what proved to be a false ballistic missile alert. HERSHAEL YORK/BP

"Each of us responded to it differently," York, pastor of Buck Run Baptist Church in Frankfort, KY, told BP via email. "My mother just kept putting on her makeup, less concerned than if she had received notice that it might rain." York reasoned through what might happen in the coming minutes with "complete confidence in the Lord that He would be with us no matter what."

York's wife Tanya also "had an incredible calm and serenity, but it occurred to her that in a matter of moments we might see Jesus," York said. So she sent a text message to their sons and their sons' families stating, "We just got an inbound ballistic missile threat to Hawaii ... should it be real ... love you guys intensely and be faithful and I'll see you in Heaven!"

Allison, of the University of Hawaii BCM, said he wanted to contact many loved ones during the moments he thought could be his last but didn't have time.

"It made me realize that I want to be telling people I care about them and love them every day," Allison said.