Help! There’s a deacon on the steeple

SWAINSBORO - It is not often that a deacon gets coverage for his daring exploits in the local newspaper, but the Swainsboro Forest Blade highlighted the daring misadventure of Darryl Drake last March.

You would almost have to know Darryl to imagine him getting into the kind of predicament described in The Blade. He is a member of the Mount Olivet Baptist Church in Garfield. His pastor, Tim Shumaker, describes him as an affable, outgoing, outspoken church leader, who is never shy about accenting his sermons with interjections, even questions at times. 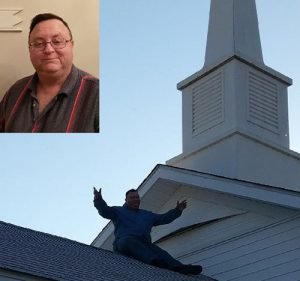 Deacon Darryl is stranded on the roof of Mount Olivet Baptist Church in Garfield, stretching out his arms and crying for help. TIM SHUMAKER/Special

Shumaker explained, “Darryl can tell humorous stories, but he is often the brunt of jokes and capers as well. However, he is a man with a servant’s heart and would do anything for anybody.”

Sometimes Drake will see the need for something to be done and take the initiative to meet that need himself. On March 15 Darryl decided to repair some loose siding on the steeple of the church. He got a ladder and climbed onto the roof of the entrance of the church and attempted to get on top of the roof of the auditorium to do the needed repairs.

Suddenly Darryl realized that he was in a precarious position and it was going to be more difficult getting down than it was climbing up onto the roof.

The adventurous deacon had been accompanied to the church by his wife, Donna, who began to realize that her husband was perilously perched in a precarious predicament. She ran to the church pastorium next door seeking help in the midst of the developing emergency. 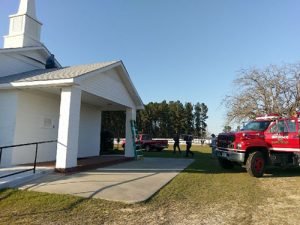 The fire departments have come to the rescue, but at this point in time notice that Darryl is still on the roof near the steeple waiting for deliverance. TIM SHUMAKER/Special

The pastor’s wife, Penny, was home and she soon realized the gravity of the situation and perceived that it was time to make a 9-1-1 call. Sharing Donna’s panic, Penny responded to the question, “How may I help you?” by saying “Come to Mount Olivet Baptist Church. We have a deacon on the steeple.”

Apparently, the dilemma was so critical that firefighters from the Swainsboro Fire Department jumped on Ladder Truck no. 7 and were also dispatched to the scene of the pending calamity. The first responder to arrive on the scene found Drake sitting on the roof of the entrance of the church with his arms outstretched as if to say, “Help me! I need to be delivered!”

It was the roof ladder from Garfield Engine 252 that the firefighters used to guide Drake to the main ladder and safely to the ground.