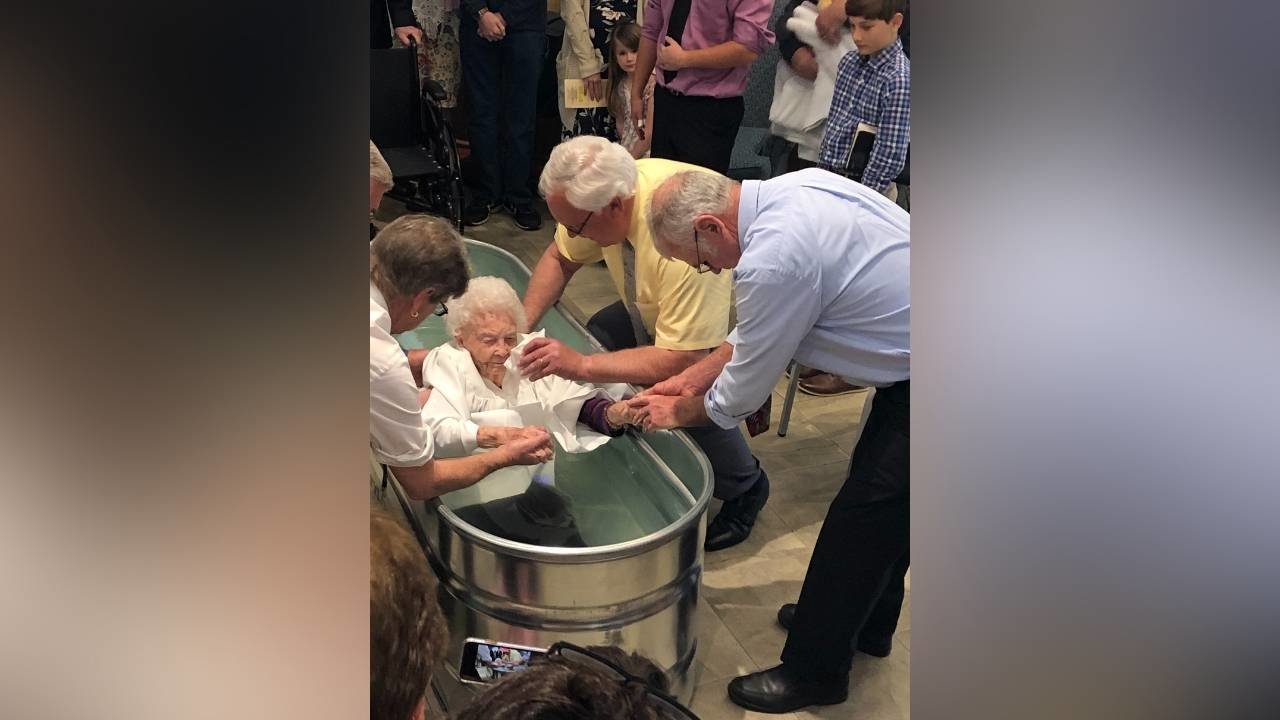 Pastor Fred McCoy (in the yellow shirt) secured a galvanized container and used it to baptize a 97-year-old woman who recently trusted Christ as Savior. COURTESY/Gerald Harris
Posted Thursday, May 6, 2021 11:31 am
Gerald Harris

Pastor Fred McCoy (in the yellow shirt) secured a galvanized container and used it to baptize a 97-year-old woman who recently trusted Christ as Savior. COURTESY/Gerald Harris

PERRY – Houston Lake Baptist Church celebrated its 185th anniversary on Sunday, May 2, 2021. Pastor Fred McCoy was expressing his thanksgiving for the special day and indicated that the anniversary celebration a momentous and noteworthy occasion by the preaching of Georgia Baptist Mission Board Executive Director Thomas Hammond, singing, special video greetings from some of Southern Baptists most notable leaders and the highest attendance since the pandemic swept across the country.

Hammond’s message, from Mark 2 on Jesus’ healing of the paralyzed man who was lowered through the roof by four friends, was pertinent and powerful. The music was inspiring and the video messages by Kevin Ezell, president of the North American Mission Board, and Paul Chitwood, president of the International Mission Board, all combined to make the day special and memorable. 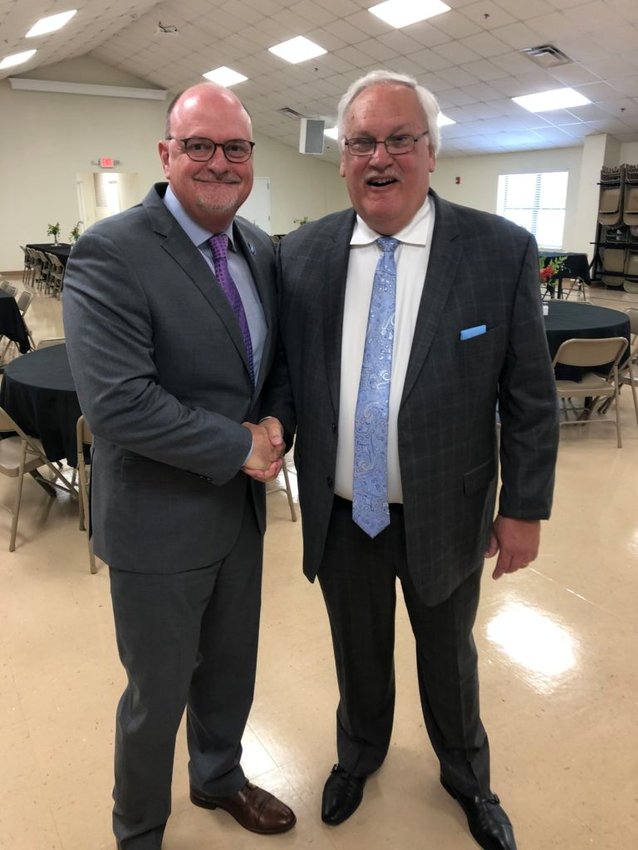 Thomas Hammond, Executive Director of the Georgia Baptist Mission Board, (left) preached the 185th anniversary sermon for Houston Lake Baptist Church where Pastor Fred McCoy has the record of having served the church longer than other pastor. COURTESY/Gerald Harris

McCoy, who became the pastor of Houston Lake in 2006, is known as one of Georgia’s most respected pastors and evangelists and has the longest tenure among the 56 pastors who have provided leadership for the church. The church, founded in 1836, had 23 pastors who stayed only one year. The current pastor believes that many of the earlier pastor were circuit riding preachers who were typically known for shorter pastorates.

One pastor, E. M. Clapp, who was pastor during the 1930s, reportedly preached while standing on his hands and was known for riding his bicycle backwards, all for the purpose of winning the favor of large numbers of young people. Clapp was a contemporary of Billy Sunday, who was known for his unusual antics while preaching. He was known to jump up on the pulpit, lie down on the platform, wrestle with the devil and run down the aisle of the tabernacle where he was preaching and slide into the pulpit as if he were sliding into home plate in a baseball game. Perhaps that qualifies as “being all things to all men in hopes of winning some” as the Apostle Paul vowed to do.

Historical records indicate that Houston Lake was founded when Andrew Jackson, America’s seventh president, was in the White House. Fourteen members met and constituted the Sand Ridge Baptist Church, a part of the Echeconnee Association of Primitive Baptist Churches in 1836.

In August of 1841, Sand Ridge joined the Rehoboth Baptist Association because the Echeconnee Association was in sharp disagreement with the Georgia Baptist Convention over the issue of missions. Sand Ridge withdrew from the association and became a missionary Baptist Church. For many years the church met once a month with many pastors who had a good horse and the Good Book, all resolved to keep the church going. J. R. Home was pastor from 1850 to 1863, the second longest tenure of a pastor in the history of the church.

Interestingly, the church’s statistics submitted to the Rehoboth Association in 1855 revealed the following:

To many it may be worthy of note that three members of the church were excommunicated. Consequently, the Sand Ridge exercised church discipline and removed members from the roll who failed to live up to the expectations the church had established for those who professed faith in Christ. The fact that two members were restored may be even more commendable, because that indicates that church discipline was followed up with a concerted effort to renew and reinstate members who had been excommunicated.

Prior to the American Civil War, a population shift resulted in many people moving to Houston County. The Houston Factory located on Mossy Creek was a growing and viable business; and the community near the factory appeared to be an ideal location for the future of the church. The dreams of the church members were realized when a new building was completed on the desired property three days before Christmas 1860.

In May of 1993, the congregation moved into the new church building at the current address of 2300 Highway 127E in Perry. In April 2010 under the leadership of Pastor McCoy a 5500 sq. ft. addition to the church was constructed.

In reviewing his ministry at Houston Lake, McCoy recalled the church’s engagement in a Moldovan mission’s endeavor. He stated, “In 2010, a team of eight of our members went to Moldova. One lady had never been out of the state of Georgia and had never flown commercially in her life. All who went led people to faith in Jesus.”

McCoy continue, “I am happy to report that the church has licensed and ordained two men to the Gospel ministry in recent years.  Our community around us is rapidly growing, new homes are being built all around us.  Our vision is to change with our community and continue to be a vital and healthy church in a day of apostasy.  We preach three times a week and we are not conforming to the culture around us but seeking to conform the culture to Jesus.”