How Keaton helps us all stand 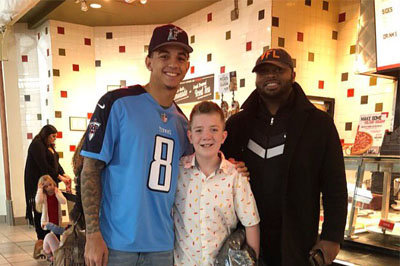 Posted Monday, December 11, 2017 5:23 pm
Scott Barkley
Before even watching it, I was struck by the video. The still frame of a little boy, a look of hurt and confusion on his face. Like us, he didn’t understand why people are mean just because they can be. Like us, he wishes things were different. Like us, he knows this isn’t right. Last week, Keaton Jones called his mom to come pick him up at his Knoxville, TN-area middle school. Again, he was afraid to go into his cafeteria because of bullies. After getting in the car, he asked her to video him so he could ask some questions to the world.

This is Keaton Jones, he lives in Knoxville and he has a little something to say about bullying.pic.twitter.com/coyQxFp33V

“Why do they bully? What’s the point of it?” he asked through tears. “Why do they find joy in taking innocent people and finding a way to be mean to them?” Honestly, I didn’t want to watch it. I knew it would hit me, and it did. Tears came, but not because I've experienced something on Keaton's level in my life. It affected me for the same reason Keaton’s video – in just a few days – has resonated with so many others. We know things shouldn't be this way. We know they should be better. Soon, University of Tennessee football players wanted to hang out with Keaton. Lebron James invited him to the Cavaliers/Grizzlies game in Memphis coming up. Justin Beiber recorded a video calling Keaton an icon, thanking him for inspiring so many people. Captain America himself, Chris Evans, invited Keaton to next year's Avengers premier in Los Angeles. Singers, actors, and people like me with nothing more than a keyboard gave their support. Keaton's mom, Kimberly, has said she can't keep up with the messages of love for her son. In his pain, Keaton touched on something we all know and feel. Causing someone to hurt just because you can, it's not right. There isn't a point to it, and it makes you feel by yourself. Keaton's bullies told him he was alone. The Bible says otherwise. "The Lord is near the brokenhearted and saves the crushed in spirit" (Ps. 34:18) Two individuals at the heart of this impress me, the first being Keaton, of course. At his age after what he'd experienced I wouldn't have been able to verbalize it so well. The heart of his message, I fear, would've been lost in my attempts to explain how I felt. The second is Kimberly Jones. Her anger remains tenuously in control as she asks her son to describe his experience. As a parent of four school-age children, I can understand her internal battle between what she wants to do and what she is doing. That is, she's making her son's experience our experience, in a manner of speaking.

So I got the chance to spend the day with my new best bud Keaton. It was unbelievable to get to know him and realize that we have a lot in common. This dude is very special and has changed my life forever. Now I have the little brother I always wanted! God bless you my man pic.twitter.com/vMHVtnf2rC

Like Keaton, we all understand pain is a part of life. But like Keaton, we question its existence anyway. "It'll probably get better one day," he says, before turning away from the camera. One can't blame him for, at that moment, wondering if what he said was true. But, it will. "He will wipe away ever tear from their eyes ... for the former things have passed away" (Rev. 21:4). We all cry for justice. Where things are wrong, we want them made right. We know things can be better. The only thing about Keaton's story that works me up more than his original video is the public's response, particularly on social media. Perhaps you've noticed the news cycle skewing a tad negative for some time now. I literally can't watch it in the same room with my kids anymore due to potential/probable subject matter. Keaton's experience reminds us there are better stories out there. Better yet, it reminds us to always be on the lookout for where we can make a difference. The Bible speaks to defending the rights of the poor and needy (Pro. 31:9) as well as seeking justice and ending oppression (Is. 1:17). Soon after his video went viral, so did the hashtag #StandWithKeaton. And though millions have jumped to Keaton's side, I hope this doesn't remain a case of good will just for Keaton. I pray this becomes something we talk about. I pray we recognize, and emulate, God's call to defend the defenseless and stand for others. I pray that in standing for Keaton, we stand for everybody.