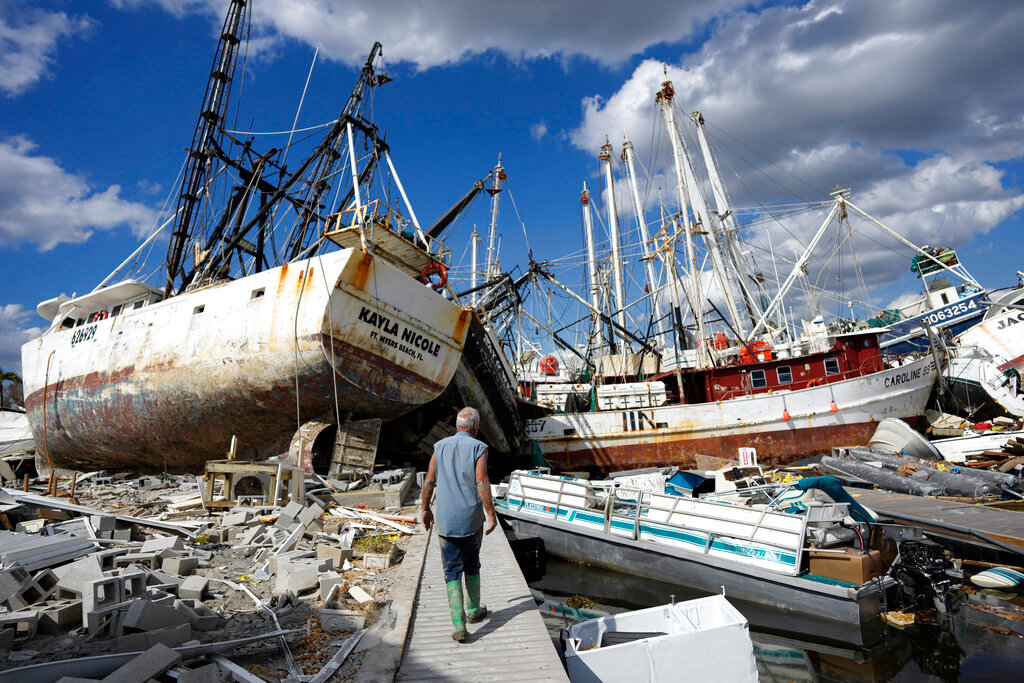 Bruce Hickey, 70, walks along the waterfront littered with debris, including shrimp boats, in the mobile home park where he and his wife Kathy have a winter home, a trailer originally purchased by Kathy's mother in 1979, on San Carlos Island, Fort Myers Beach, Fla., Wednesday, Oct. 5, 2022, one week after the passage of Hurricane Ian. (AP Photo/Rebecca Blackwell) 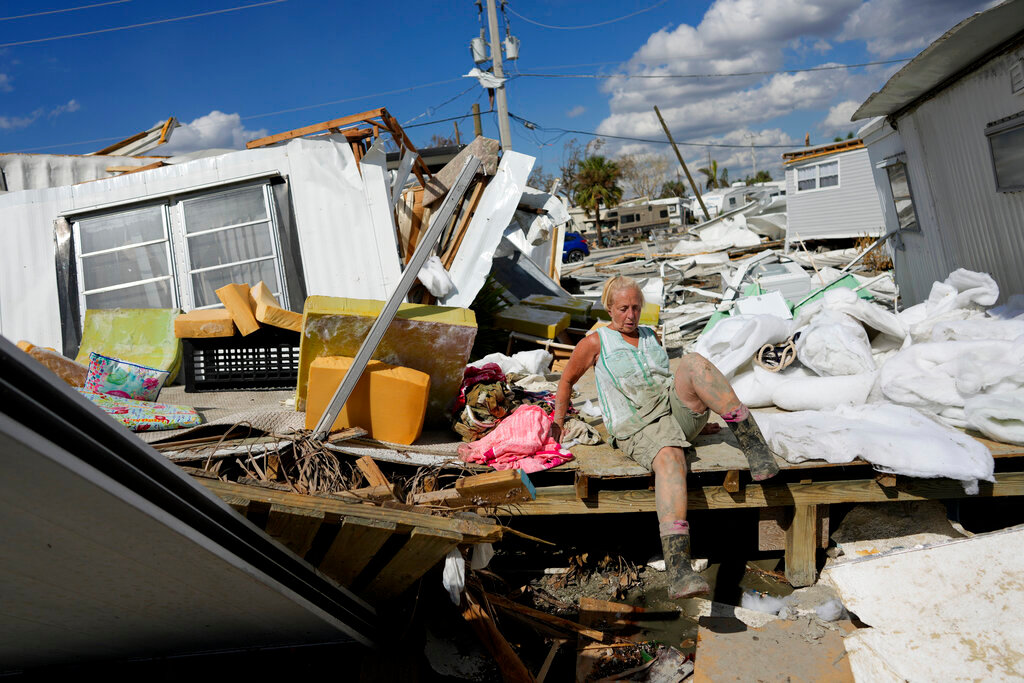 Kathy Hickey, 70, carefully climbs across a ruined trailer as she picks her way through debris to where she and her husband Bruce had a winter home, a trailer originally purchased by Kathy's mother in 1979, on San Carlos Island in Fort Myers Beach, Fla., Wednesday, Oct. 5, 2022, one week after the passage of Hurricane Ian. (AP Photo/Rebecca Blackwell) 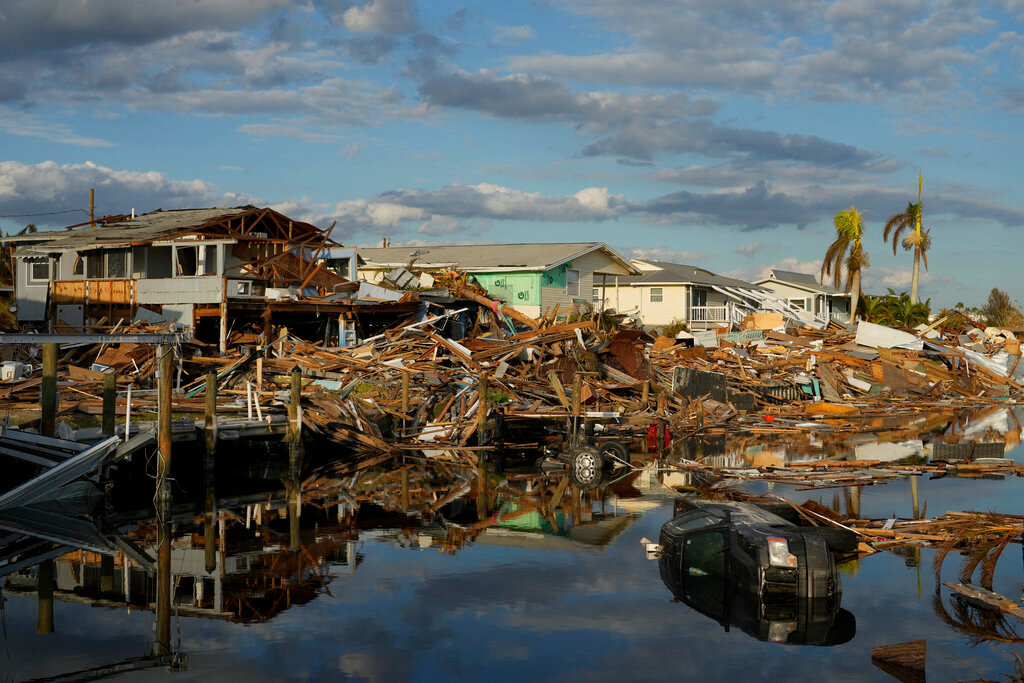 Cars and debris from washed away homes line a canal in Fort Myers Beach, Fla., Wednesday, Oct. 5, 2022, one week after the passage of Hurricane Ian. (AP Photo/Rebecca Blackwell) 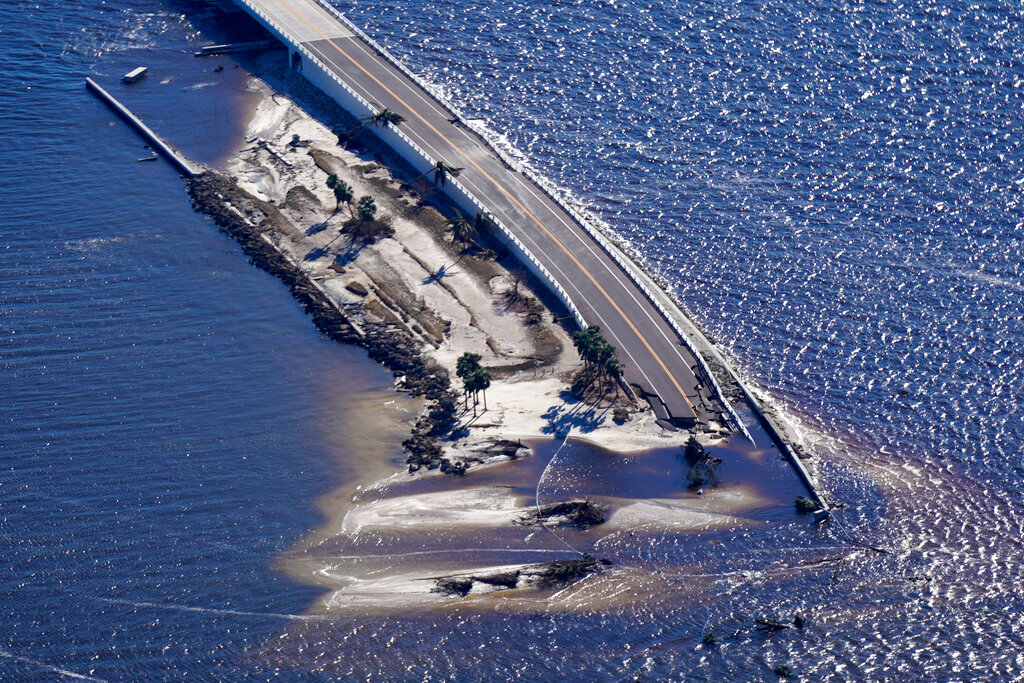 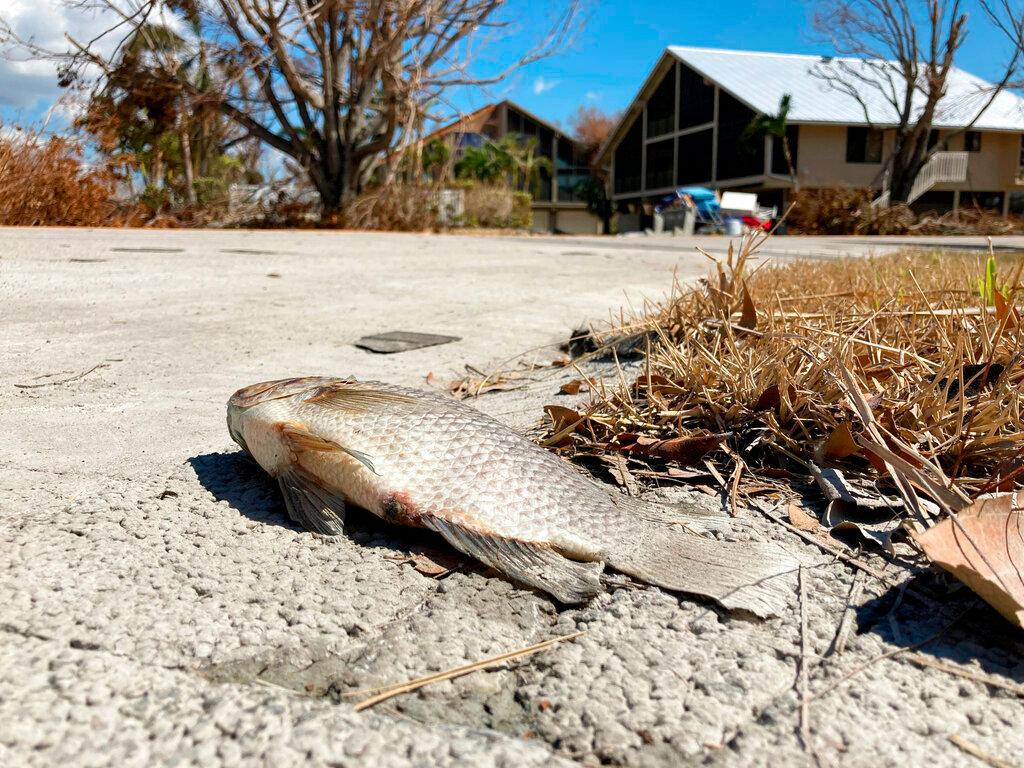 A dead fish lies in the street as residents of Florida’s Gulf Coast barrier islands are returning to assess the damage from Hurricane Ian, Thursday, Oct. 6, 2022, in Sanibel Island, Fla., despite limited access to some areas. (AP Photo/Scott Smith) 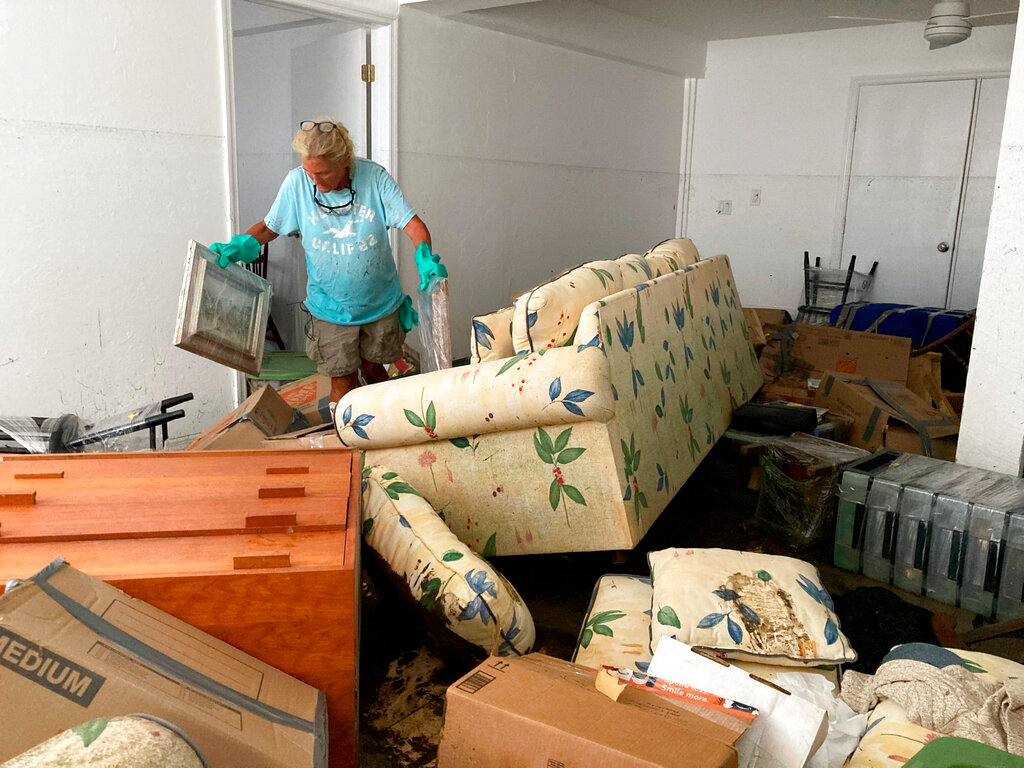 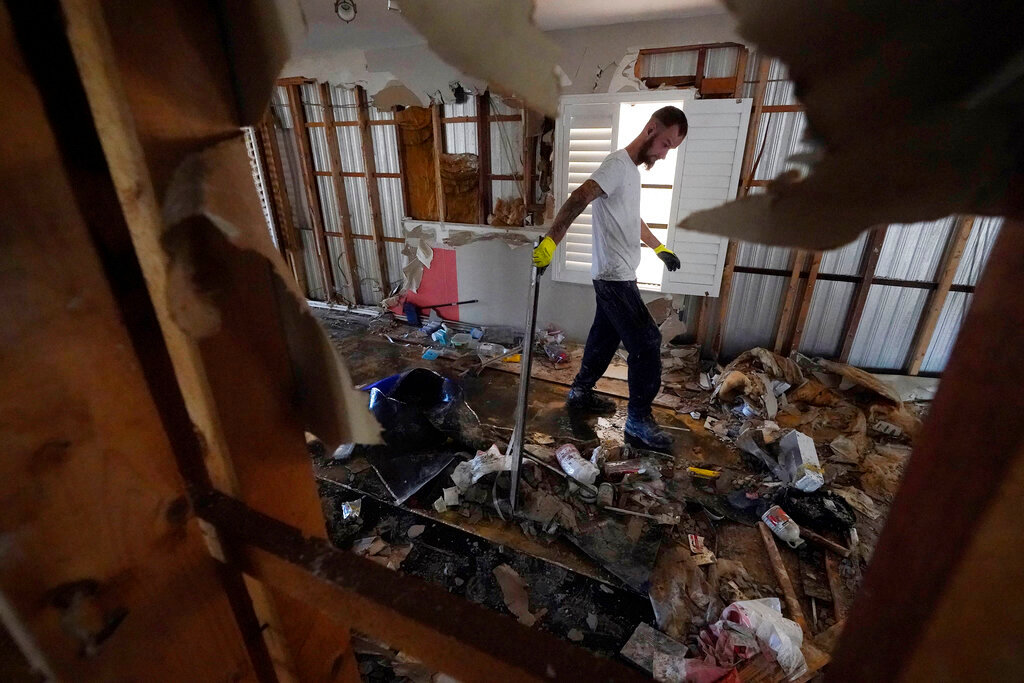 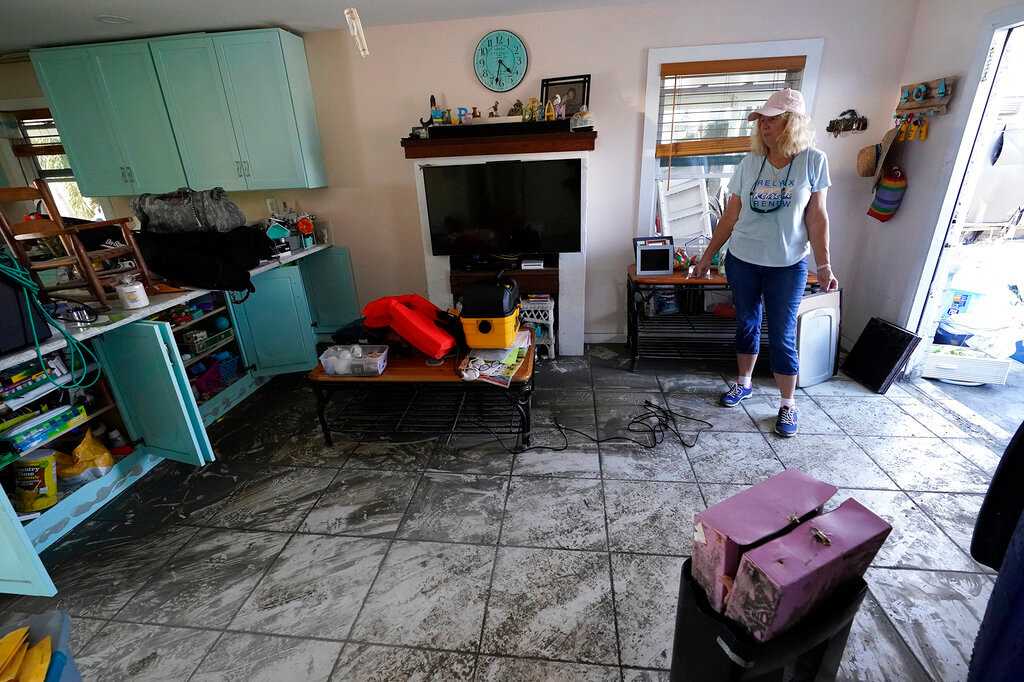 SANIBEL ISLAND, Fla. (AP) — Rotting fish and garbage lie scattered in Sanibel Island's streets. On the mainland, debris from washed-away homes is heaped in a canal like matchsticks. Huge shrimp boats sit perched amid the remains of a mobile home park.

“Think of a snow globe. Pick it up and shake it — that’s what happened,” said Fred Szott.

For the past three days, he and his wife Joyce have been making trips to their damaged mobile home in Fort Myers, cleaning up after Hurricane Ian slammed into Florida's Gulf Coast.

As for the emotional turbulence, he says: “You either hold on, or you lose it.”

The number of storm-related deaths rose to at least 101 on Thursday, eight days after the storm made landfall in southwest Florida. According to reports from the Florida Medical Examiners Commission, 92 of those deaths were in Florida. Five people were also killed in North Carolina, three in Cuba, and one in Virginia.

Ian is the second-deadliest storm to hit the mainland U.S. in the 21st century behind Hurricane Katrina, which left more than 1,800 people dead in 2005. The deadliest hurricane ever to hit the U.S. was the Great Galveston Hurricane in 1900 which killed as many as 8,000 people.

Residents of Florida’s devastated barrier islands are starting to return, assessing the damage to homes and businesses despite limited access to some areas. Pamela Brislin arrived by boat to see what she could salvage.

Brislin had stayed through the storm, but is haunted by what happened afterward. When she checked on a neighbor, she found the woman crying. Her husband had passed away, his body laid out on a picnic table until help could arrive. Another neighbor’s house caught fire. The flames were so large that they forced Breslin to do what the hurricane could not — flee with her husband and a neighbor’s dog.

Ian, a Category 4 storm with sustained winds of 150 miles per hour, unleashed torrents of rain and caused extensive flooding and damage. The deluge turned streets into gushing rivers. Backyard waterways overflowed into neighborhoods, sometimes by more than a dozen feet, tossing boats onto yards and roadways. Beaches disappeared, as ocean surges pushed shorelines far inland. Officials estimate the storm has caused billions of dollars in damage.

The broken causeway to Sanibel Island might not be passable until the end of the month. Officials on the island had ordered a complete curfew after the storm passed, allowing search and rescue teams to do their work. That meant residents who evacuated were technically blocked from returning.

The city of about 7,000 started allowing residents back from 7 a.m. to 7 p.m. on Wednesday. City manager Dana Souza told residents in a Facebook Live stream that he wished the municipality had resources to provide transportation but that, for now, residents would have to arrange visits by private boat.

Pine Island is closer to the mainland than Sanibel, and temporary repairs to its causeway were finished on Wednesday.

But the island was hit hard by the storm. Cindy Bickford's house is still standing. Much of the damage was from flooding, which left a thick layer of rancid muck on her floors. She's hopeful that a lot can be salvaged.

“We’ll tear the home apart so we can live in it,” said Bickford, who wore a T-shirt that said “Relax, Refresh, Renew.”

“It’s not our stuff we’re worried about. It’s our community. Pine Island is extremely close-knit,” said Bickford, who arrived Thursday for the first time.

Jay Pick said the island still feels cut off from the outside, and a bit chaotic.

“People are trying to do the right thing and help people, and yet other people are stepping up and taking their gas cans and stealing generators,” he said.