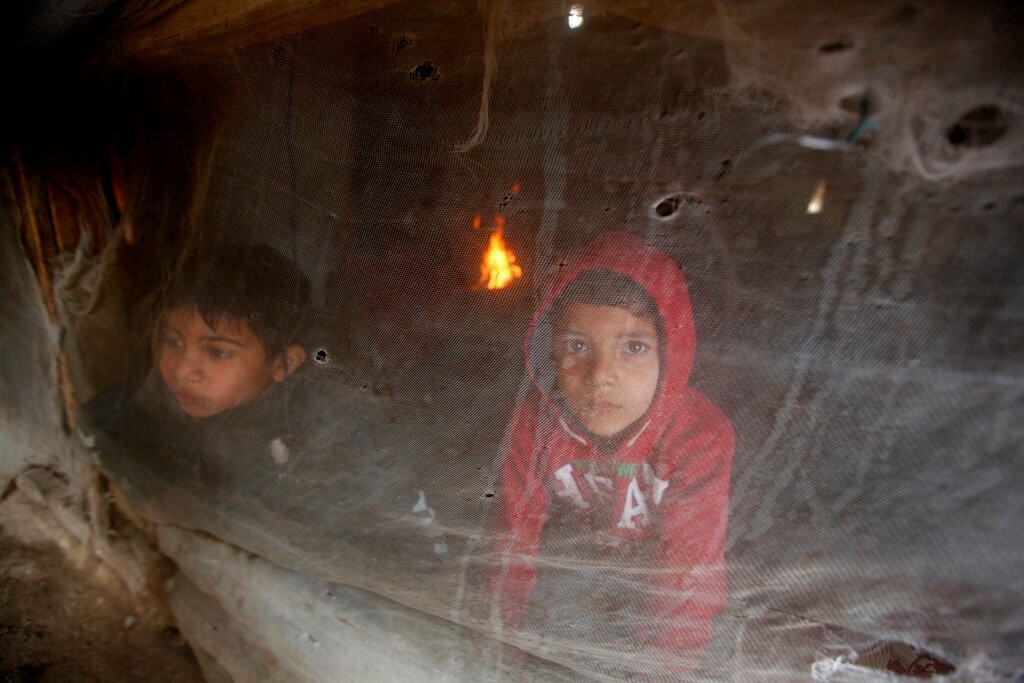 Displaced Syrian boys look through their tent window, as they try to stay warm at a refugee camp near the southern port city of Zahrani, Lebanon, Wednesday, Jan. 19, 2022. A snowstorm in the Middle East has left many Lebanese and Syrians scrambling to find ways to survive. Some are burning old clothes, plastic and other hazardous materials to keep warm as temperatures plummet and poverty soars. (AP Photo/Mohammed Zaatari)
Mohammad Zaatari
Posted Thursday, January 20, 2022 9:11 pm
By BASSEM MROUE, Associated Press

BEIRUT (AP) — A snowstorm in the Middle East has left many Lebanese and Syrians scrambling to find ways to survive, burning old clothes, plastic and in some cases even sheep manure to keep warm as temperatures plummet and poverty soars.

Lebanon's economic collapse and currency crash have meant an increasing number of families are unable to afford fuel to heat their homes this winter.

Hundreds of thousands of Syrian refugees in Lebanon and Jordan and others displaced by Syria’s war are sheltering in poorly heated tents, relying mostly on layers of blankets to keep warm.

“The situation is very, very difficult,” said social activist Baseem Atrash, speaking from the snowcapped northeastern Lebanese town of Arsal near the Syrian border. Arsal is home to one of the largest Syrian refugee concentrations in Lebanon, with some 50,000 people, most of them living in flimsy tents.

Atrash said Syrian refugees, as well as some Lebanese who have fallen into poverty since the country's financial meltdown began in October 2019, lack diesel for heaters, while constant power cuts make electric heaters useless.

“They are burning anything to keep their heaters on, from plastic to old clothes,” Atrash said. Earlier this month, a Syrian mother and her three children died in their sleep after inhaling toxic fumes from burning coal to heat their room in a village in southern Lebanon.

Lebanon, a country of 6 million people, is home to 1.5 million Syrians who fled the now decade-old civil war in their country. The United Nations estimates that 90% of Syrian refugee households live in extreme poverty. But as Lebanon grapples with an unprecedented economic crisis, the poverty has deepened for both Lebanese and Syrians. Sky-rocketing fuel prices coupled with a currency collapse has meant many essential commodities are now out of reach for the average Lebanese.

Nadim Attieh, a Lebanese, decided to donate some of his firewood to needy families after he heard of how cold it will get. He used Twitter to spread the word of his in-kind donation: a ton of wood — enough to last five or six families through the coldest three days ahead.

“I have stocked up on wood during summer and I have a good quantity. So why not share with people who are underprivileged,” asked Attieh, himself out of work since losing his job in the Persian Gulf a couple of years ago.

The cost of a ton of wood is now equivalent to five times the minimum wage, selling for 3 million Lebanese pounds ($120) while some 20 liters of diesel now going for about 300,000 — nearly 10 times what it cost three years ago.

In Syria’s northwestern province of Idlib, where many of the 3 million residents are displaced, Yassin al-Yassin was fortifying his tent with extra tarps and supports as the weather worsened.

Al-Yassin, who lives in the tent with his wife, two daughters and son, couldn’t afford wood or diesel for heating, so he'll be burning dried sheep manure that's been piled up since summer.

“All we have to protect us is tarp and blankets,” he said by telephone from the tent, surrounded by mountains near the Turkish border. He said only those receiving hard currency from relatives abroad can afford to buy diesel and wood for heating.

Aid group CARE International said temperatures are expected to drop in Jordan, Lebanon, and Syria to well below freezing, endangering the lives of millions already living in precarious circumstances.

“People can see their own breath when lying on their thin mattresses, you will see children walk around in flipflops and ripped shirts. Families are afraid that they will freeze to death,” said Jolien Veldwijk, CARE Syria Country Director.

Cold and respiratory illnesses are rising and spreading, as is the threat of COVID-19 in overcrowded camps without sufficient healthcare, CARE said.

Ahamd Rakan, displaced nearly two years ago from his hometown of Kfar Nabel in the last rebel-held stronghold in northwest Syria and now living in a tent, said he has been gathering wood, olive seeds, papers and old clothes for months in order to use them for heating.

“I am luckier than others. I have a heater so I can keep my children warm,” he added.

In Gaza, residents struggled to stay warm amid power shortages. The coastal enclave, home to more than 2 million people, has been under an Israeli-Egyptian blockade since the militant Hamas group seized power in 2007. Hamas and Israel have fought four destructive wars since then, most recently last spring, and countless rounds of smaller skirmishes.

At the height of the storm Wednesday, rainwater flooded Gaza streets and schoolchildren waded through the muddy waters after classes, drawing criticism against Hamas for its mismanagement of the territory. Elsewhere, children played barefoot in the muddy alleys.

“It’s a freezing cold in this area, beyond what you can imagine," said Suzan Ahmed, 35, as she put a potato in a pot to boil on the fire.

Heavy snow also blanketed the Golan Heights, a strategic plateau that Israel captured from Syria during the 1967 Mideast war. Bulldozers could be seen clearing snow drifts on Mount Hermon, where the area’s only ski resort was closed to visitors because of the stormy weather. The snow began falling early Wednesday and more is expected.

In eastern Turkey, heavy snowfall closed a major highway linking the cities of Tarsus, Adana and Gaziantep, stranding thousands of people and vehicles in snow that was half a meter (yard) high, the state-run Anadolu Agency reported. Gendarmerie forces distributed food overnight while authorities worked to clear the snow and reopen the highway. Access to thousands of villages was also blocked.