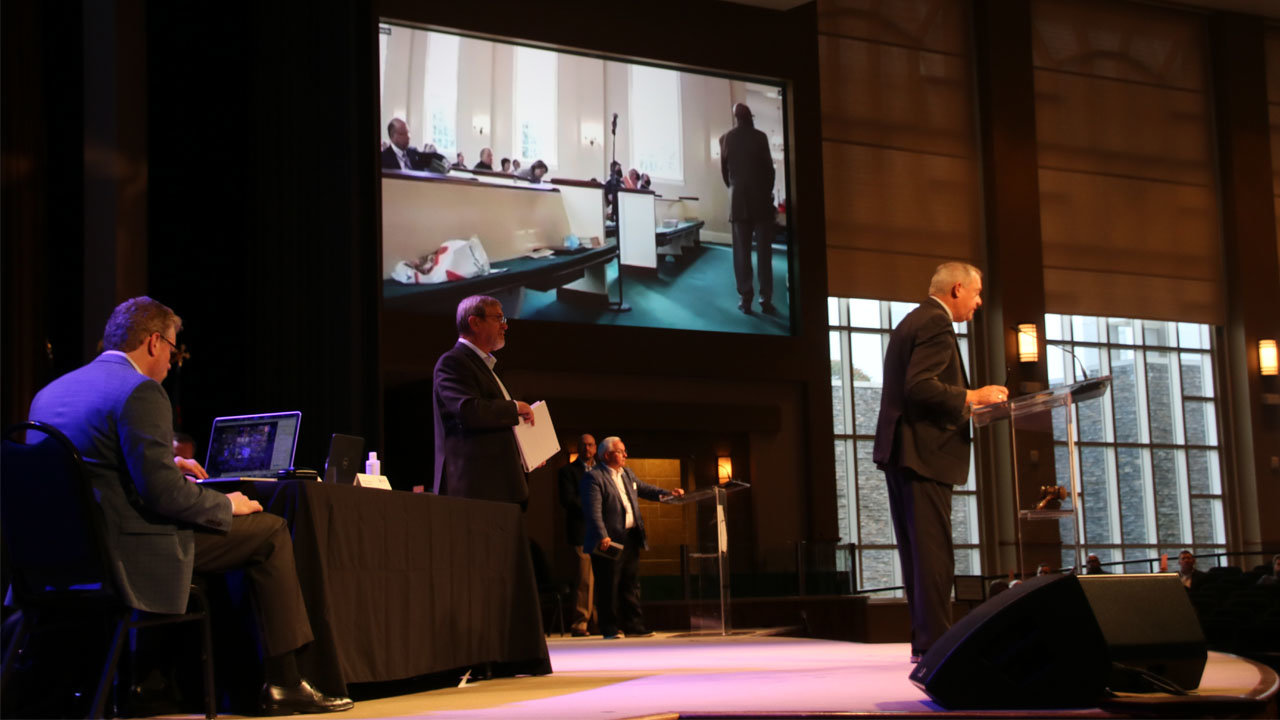 DULUTH — A clear, smooth setup of sound and video technology is always important for a meeting. The 2020 Georgia Baptist Convention tested those capabilities but could possibly have laid the groundwork for future meeting options.

Georgia Baptist Mission Board staff Jon Graham, video producer, and Scott Smith, communications director, knew about six weeks ahead of the Nov. 9 annual meeting that they would need to arrange a system for sharing video and audio as well as voting and discussion capabilities across at least four locations and two campuses. As has been the case for many groups meeting during COVID-19, they ended up leaning on Zoom technology.

“It’s something that a lot of people are familiar with now,” explained Graham. “A benefit for us was a feature where you can download time codes to match with its chat option. This helped satisfy the needs of the parliamentarian.” He also cited Zoom’s anti-echo feature in helping prevent feedback at remote locations.

Ingleside Baptist Church in Macon hosted the annual meeting, with its sanctuary serving as the central hub for the gathering. To stay within protocols for social distancing due to COVID-19, the church’s gym and chapel were also utilized for messengers and guests as was the sanctuary for Turning Point at Mabel White Baptist Church, a little more than five miles away.

A traditional microphone system is rigged for one room, linked through ethernet cables or something similar. That arrangement is pretty straightforward for those on stage to manage which microphone is being used and the nature of the question by the messenger. At the annual meeting, Smith was on stage at his laptop, working alongside parliamentarian Dennis Conway and GBC President Robby Foster as voting results or questions from those in the other three rooms were passed along.

In essence, this was a Zoom call begun by Smith in Ingleside’s sanctuary with three other participants. Those other “participants” were the overflow rooms that included numerous people. A Georgia Baptist employee monitored the laptop in each of those rooms, with a GBC vice president serving as the liaison to passing along information to share with Smith. 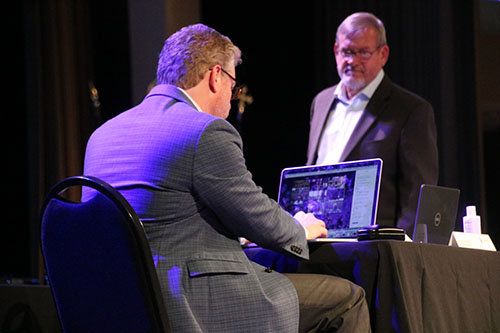 The biggest concern, Graham and Smith said, surrounded feedback from the other rooms. To fix this, microphones in those locations were muted as the audio from Ingleside’s sanctuary was piped in. There ended up being no discussion during the Resolutions part of the program. But if there had been, the incoming audio would have been muted a second after the microphones in those rooms were unmuted.

Video looping was also a possibility. Graham, who spent the meeting working with Ingleside’s tech team in their control room, said this required some coordination and using various cameras to insure none were shooting into the other on the Zoom call.

Some attendees mentioned audio issues on social media. However, Graham said those appear to be independent of the Zoom call itself and may have been connected to the Vimeo live stream and that platform’s attempt to work with Boxcast, another live streaming platform utilized through Ingleside.

Another wrinkle quickly ironed out involved timing the pace of what happened in Ingleside’s sanctuary and the other rooms. Every year prior to this one the presiding GBC president could ask for motions or something else from the crowd, scan the room for a response, and move on if it was clearly okay to do so. This year, Foster had to learn to pace himself until getting word back from the other locations.

“There was probably a two or three second delay to get confirmation from those other rooms,” Smith noted. “That doesn’t seem like a long time, but on stage it can feel like an eternity. We also needed to allow people time to get to a microphone if they wanted to.”

Treating four locations as if they are one could be risky and required a lot of teamwork, he added. “I was most nervous about calling something as settled too soon before it was official.”

Both Graham and Smith stated that the video call by Beth Ann Williams, lead strategist for Georgia Baptist Women, was somewhat of a test and went as well as could be hoped. Even without 2020 being … 2020, technology has a way of throwing a curveball when you least expect it.

“We knew her calling in would work,” said Graham. “But when it started to work smoothly, we started to relax a little.”

“That call got a lot of comments from our team as to its clarity,” agreed Smith. “There was no professional equipment on her end. But she still had great lighting and audio.”

In addition to Georgia Baptist staff, Graham and Smith both credited Chris Hawkins and the tech team at Ingleside. “They certainly made all of this easier,” Graham said.

Smith pointed to Zoom as an example for how churches and groups can use such technology to broaden their footprint. “This used to be done ‘via satellite.’ That’s not cheap and it’s high-tech. Through Zoom, you can turn on your own satellite feed from any remote location. It’s amazing, and cheap.

“At the meeting, the technology worked. Had there been discussions on resolutions, we would’ve been ready.”

Graham also encouraged churches to find ways for such advancements.

“At the annual meeting, I just wanted it to go well and for people to not be distracted by the technology. I was trying to think two or three steps ahead so the technology would drift into the background so people could have a good experience.

“It’s good to experiment, to try new things and see what works. This, for instance, was stuff we already knew. We just learned to apply it in a different way.”