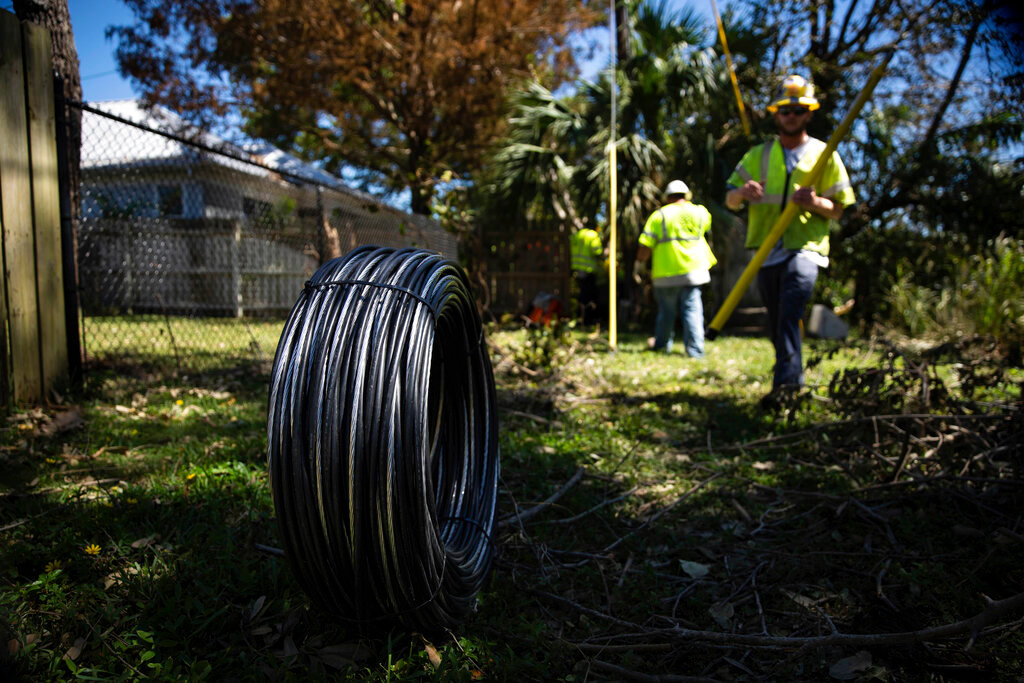 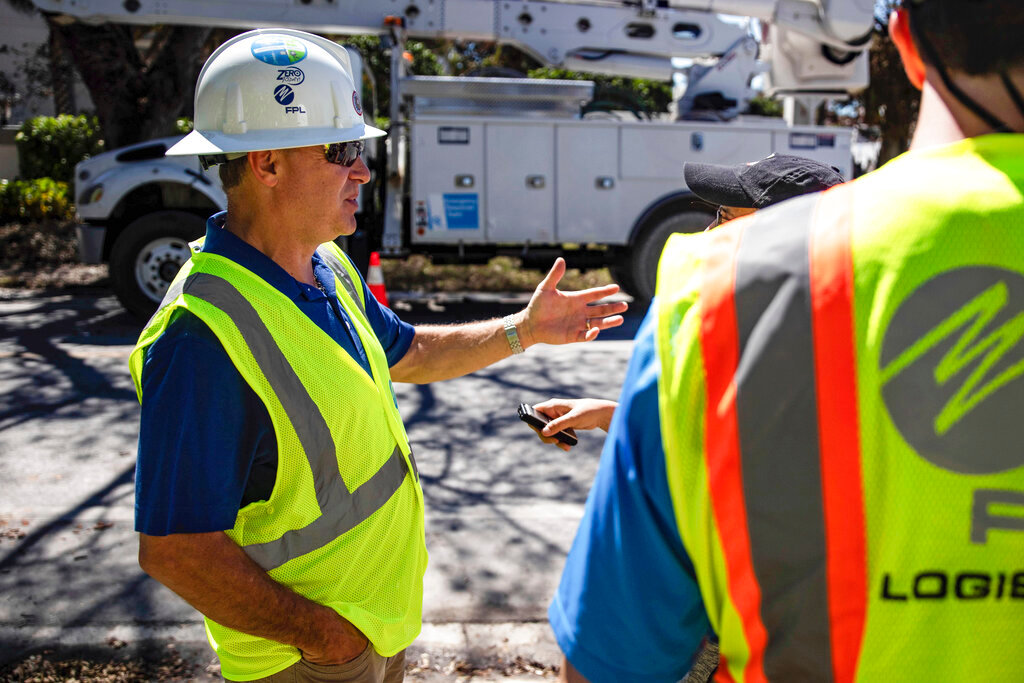 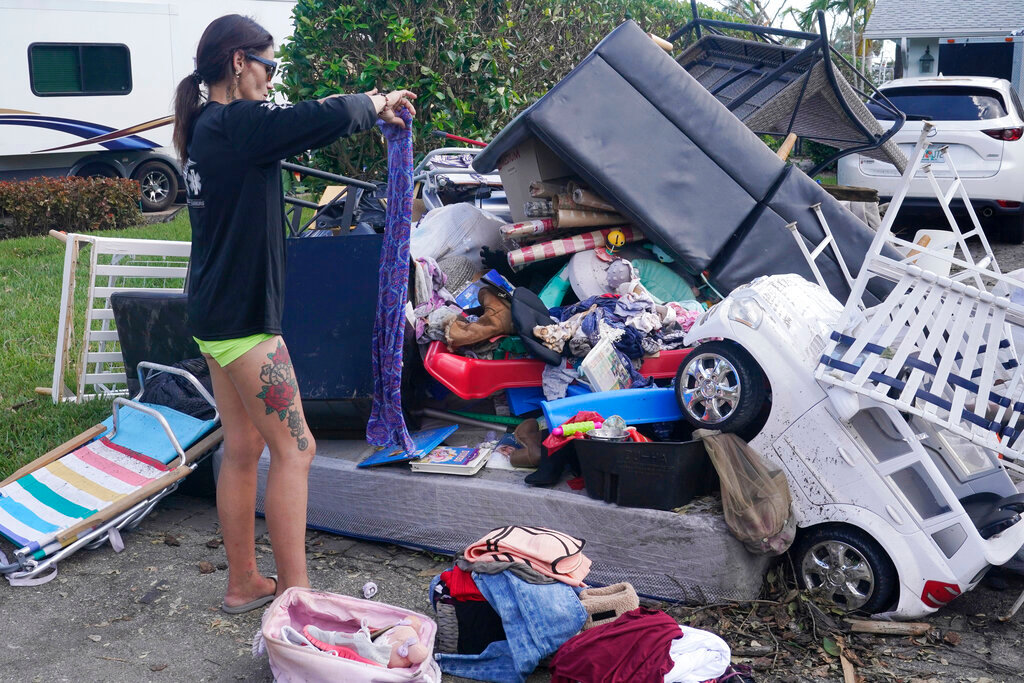 BONITA SPRINGS, Fla. (AP) — Nearly a week after Hurricane Ian smashed into Florida and carved a path of destruction that reached into the Carolinas, hundreds of thousands of Florida residents faced another day without electricity Tuesday as rescuers continued their search for those trapped inside homes inundated with lingering floodwaters.

At least 78 people have been confirmed dead from the storm: 71 in Florida, four in North Carolina and three in Cuba since Ian made landfall on the Caribbean island on Sept. 27, and in Florida a day later.

The number of storm-related deaths has risen in recent days amid ongoing search and rescue efforts in Florida, and could continue to increase as more searches take place in the hardest-hit areas. Florida officials said that as of Monday more than 1,900 people have been rescued statewide.

But for many Florida residents, power restoration has become job one.

In the town of Naples, Kelly Sedgwick was just seeing news images Monday of the devastation Ian had caused, thanks to power that was restored four days after the hurricane slammed into her southwestern Florida community. Meanwhile, in the nearby town of Bonita Springs, Catalina Mejilla was still using a borrowed generator to try to keep her kids and their grandfather cool as they waited for their power to be returned.

Ian knocked out power to 2.6 million customers across Florida when it roared ashore with 150 mph winds and pushed a powerful storm surge.

Since then, crews have been feverishly working to restore electricity infrastructure. State officials said they expect power to be restored by Sunday to customers whose power lines and other electric infrastructure is still intact.

About 430,000 homes and businesses in Florida were still without electricity early Tuesday.

For those who were getting power restored, it was a blessing. Sedgwick said she was “relieved” to have her power back and praised the crews for their hard work: “They’ve done a remarkable job."

But for those who were still waiting, it was a difficult slog.

“The heat is unbearable,” Mejilla said. “When there’s no power ... we can’t make food, we don’t have gas.” Her mother has trouble breathing and had to go to a friend’s house who had electricity. “I think they should give power to the people who are most in need.”

Eric Silagy, Chairman and CEO of Florida Power & Light — the largest power provider in the state — said he understands the frustrations and said crews are working as hard as they can to restore power as soon as possible. The utility expects to have power restored to 95% of its service areas by the end of the day Friday, he said.

A utility spokesperson said the remaining 5% comprises mostly cases where there’s a special situation making it difficult to restore power, such as the home being so damaged it can’t receive power or the area still being flooded. Those outages do not include customers whose homes or businesses were destroyed.

Another major electricity provider in the hard-hit coastal region — Lee County Electric Cooperative — said Monday it expects to hit the 95% mark by the end of Saturday. That figure does not include barrier islands like Sanibel that are in its service area.

Power restoration is always a key challenge after major hurricanes when high winds and flying debris can topple power lines that distribute electricity to homes or in more severe storms, damage major parts of the electric infrastructure such as transmission lines or power generation.

Silagy said the utility has invested $4 billion over the last 10 years to harden its infrastructure by doing things such as burying more power lines, noting 40% of their distribution system is now underground. The utility is also using more technology like drones that can stay aloft for hours to get a better picture of damage to the system, and sensors at substations that can alert them to flooding so they can shut off parts of the system before the water hits.

Silagy said he’s seen during Ian where those investments have paid off. On Fort Myers Beach, for example, where so many homes and businesses were wiped away, concrete utility poles remain standing, he said. Silagy said the company also didn’t lose a single transmission structure in the 8,000 miles they have across Florida.

Meanwhile, rescue and salvage efforts across Florida remained difficult. In DeSoto County, northeast of Fort Myers, the Peace River and tributaries reached record high levels and boats were the only way to get supplies to many of the county’s 37,000 residents.

Ian washed away bridges and roads to several barrier islands. About 130 Florida Department of Transportation trucks were dispatched to build a temporary bridge to Pine Island and by the end of the week should be finished on a structure drivers can carefully traverse at slow speeds, Florida Gov. Ron DeSantis said during a news conference Monday.

The governor said a similar temporary bridge is planned for nearby Sanibel, but will take more time.

Elsewhere, the hurricane’s remnants, now a nor’easter, weren’t done with the U.S. The mid-Atlantic and Northeast coasts got flooding rains. The storm’s onshore winds piled even more water into an already inundated Chesapeake Bay. And flooding was possible all the way to Long Island in New York.

Meanwhile, in Florida neighborhoods still without power, many residents have been sharing generators to keep things such as refrigerators cool and using outdoor grills to cook food.

In Bonita Springs, Paula Arbuckle was sitting outside her one-story home while the sound of the generator under her carport roared. She bought a generator after Hurricane Irma slammed into this area in 2018 and left her neighborhood without power. She hasn’t used it since then but after Ian knocked out the lights she’s been sharing it with her next-door neighbor. Arbuckle said it’s hard being without power.

“But I’m not the only one,” she said. Gesturing to her neighbor’s house she said: “I have a generator. They have a little baby over there. So we’re sharing the generator between the two homes.”