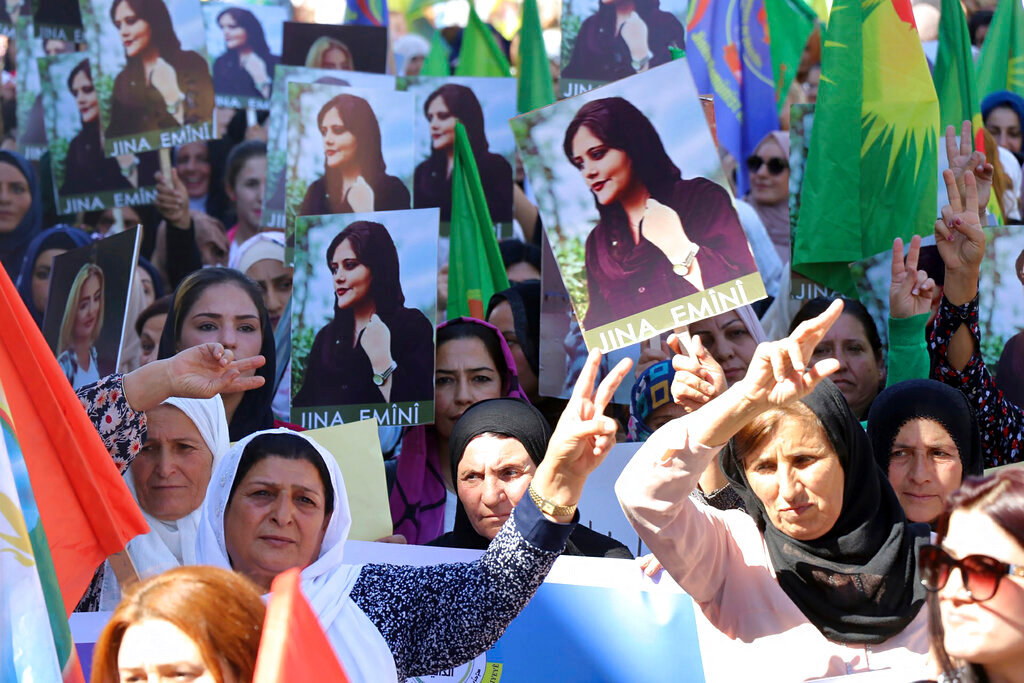 Kurdish women hold portraits of Iranian Mahsa Amini, during a protest condemning her death in Iran, in the city of Qamishli, northern Syria, Monday, Sept. 26, 2022. (Hawar News Agency via AP via AP) 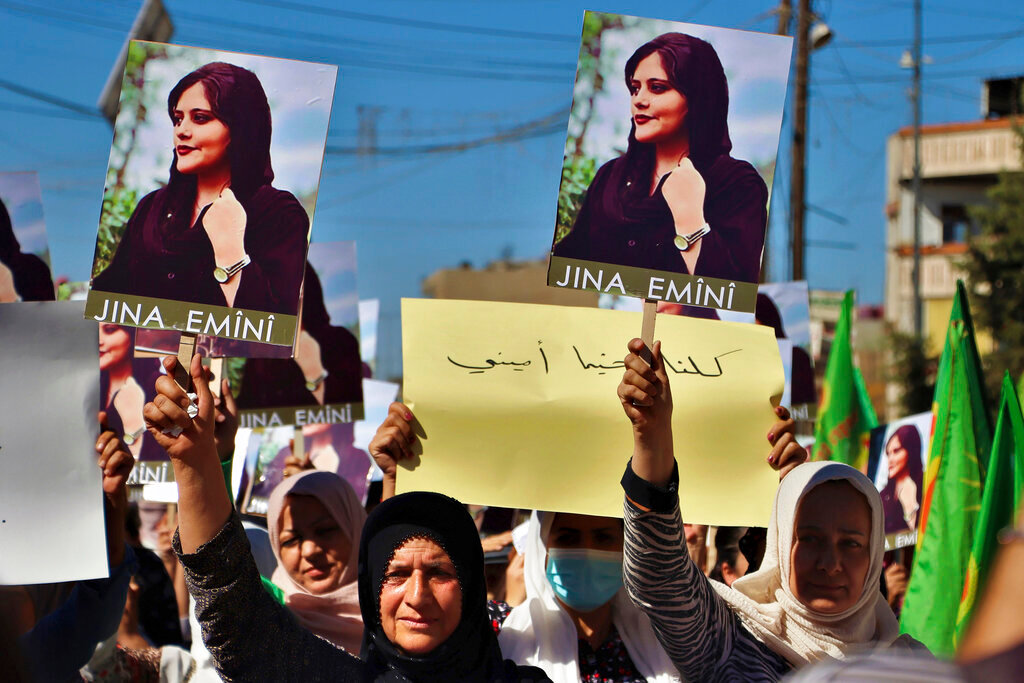 Kurdish women hold up portraits of Iranian Mahsa Amini, during a protest condemning her death in Iran, in the city of Qamishli, northern Syria, Monday, Sept. 26, 2022. (Hawar News Agency via AP via AP)
Previous Next
Posted Tuesday, September 27, 2022 10:54 am

DUBAI, United Arab Emirates (AP) — A hard-line Iranian lawmaker on Tuesday denounced female protesters who have taken off mandatory headscarves as prostitutes, doubling down on the government's stance amid the dramatic demonstrations following the death of a 22-year-old woman detained by the country’s morality police.

The harsh language by Mahmoud Nabavian, a legislator from Tehran, was in sharp contrast to the appeal by a top cleric, Grand Ayatollah Hossein Nouri Hamadani, who on Sunday urged the government to listen to the people's demands.

The fate of Mahsa Amini, an Iranian Kurdish woman who died in custody after being detained by the morality police — because her headscarf was allegedly too loose — has ignited unrest across Iran. Protests have spread to at least 46 cities, including the capital of Tehran, towns, and villages with scenes of violence and street clashes with security forces unseen for years in Iran.

Solidarity protests have also erupted in Europe, the United States, and in parts of the Middle East. In a predominantly Kurdish city in Syria, thousands of women took to the streets Monday, holding posters with Amini’s photo.

Across Iran, ordinary women and public figures, including Iranian actresses, have removed their headscarves in protest or cut their hair in public to show solidarity with the demonstrators.

Iranian state TV has suggested that at least 41 protesters and police have been killed since the demonstrations began Sept. 17. An Associated Press count of official statements by authorities tallied at least 13 dead, with more than 1,400 demonstrators arrested.

“These rioters are out to prostitute themselves,” the lawmaker, Mahmoud Nabavian, was quoted as saying by Fararu, a news website. He suggested that taking off the hijab, or headscarf, was akin to being naked in public to attract male attention.

Nabavian blamed both women and men taking part in the protests, saying they were guilty of “impurities" that need to be washed away.

“It is necessary for officials to listen to people’s demands and solve their problems and be sensitive to their rights,” said the senior cleric, according to the state-run IRNA news agency.

Meanwhile, Iran’s judiciary chief, Gholamhosein Mohseni Ejehi, warned public and famous figures who have openly supported the demonstrators, that they must pay for damages to public property caused by the protests.

Abbas Salehi, Iran’s minister of Culture and Islamic Guidance, advised that actresses who removed their headscarves on social media posts should try to find other jobs, implying the ministry could ban them from working in their profession.

Iran has arrested at least 20 journalists since the start of the unrest, the Committee to Protect Journalists said late Monday, calling on Iran to release the reporters and halt its crackdown on the media.

“Iranian authorities should be ashamed of themselves for orchestrating this brutal crackdown,” said Sherif Mansour, CPJ’s Middle East and North Africa program coordinator. “They have proved their failure to grasp that suppressing dissenting voices only compounds dissent.”

The Syrian Kurdish-run Hawar News Agency reported on the protest in the northeastern, predominantly Kurdish region of Syria where thousands of women marched Monday in solidarity with Iranian women.

In the city of Qamishli, they held up photos of Amini and toward the end of the march several women, including an elderly one, cut off their hair, threw it to the ground, along with headscarves, and set the pile on fire.