I've discovered there are three types of students 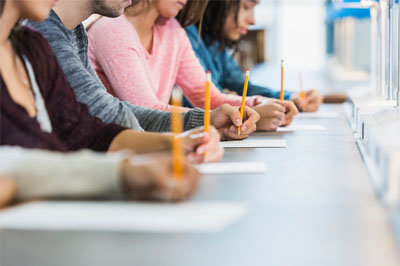 Note: This is the first of a two-part commentary from Shorter University professor Randy Douglas on the biblical knowledge of students entering their first year of college.

Closing the Back Door Part 1

How would you answer the following question?

A. A credible, historical document, accurately depicting its people, places and events.
B. Somewhat credible in that the core story is true, but some parts have been added.
C. Not a credible document, in that it has been added to many times over the years.

Most churched people I have met would probably choose answer A, although they may be hard pressed to defend this answer. Most were raised to believe the Bible is true, and good Christians don’t ask hard questions.

I have found that many churched people would choose answer B; they see the Bible is God’s Word but it is not really a historical document. Rather, it is viewed more as a “religious” document in that the core concepts are true, but not the details of the Bible. They have some doubts about how something that old and hand copied over the years could possibly be viewed as accurate and true.

Many people outside of the church would choose answer C; the Bible is just a religious book with good, moral concepts. Presenting the Bible as a historical document would be ludicrous to them because of its age and supposedly suspect transmission process.

What they do, and don't know

How would your youth answer this question? I can shed some light on this question. Every semester for the past seven years, I have asked that question (and many more) to my students at Shorter University. Every Shorter student must take Bible classes: Old Testament Survey and New Testament Survey. The number of students I have surveyed over the years has been about 1,600.

At the beginning of these courses each student takes a Pretest on the Bible. The Pretest is a 30-question Bible literacy quiz, which shows what the students know (and don’t know!) about the Bible. There are two parts to the Pretest. One part asks questions which are specific to either the Old or New Testament, depending on the course. For example, one question in the New Testament Pretest asks who wrote the Gospels. There is also a second part made up of six apologetic questions that have been carefully woven into both Pretests. The same three questions on the Bible is in both Pretests (one such question is #1 seen above). The other questions are on God and Jesus.

Why do I use a Pretest? There are two reasons:

As I have analyzed the Pretests/Posttests over the years, I have made two surprising discoveries:

The groups of students were identified based on five demographic questions that were included in each Pretest:

So how did each group score on the Pretest? In the next article I will reveal the surprising results. I will also give suggestions as to what parents and the church can do to move their teen from the Unsure group to the Uncompromising.

Where are the turkeys this year?