Executive Director J. Robert White announced this afternoon that he will retire effective Dec. 31. He celebrated his 25th anniversary with the Georgia Baptist Mission Board at the recent annual meeting in November. JOE WESTBURY/Index
Posted Tuesday, March 13, 2018 1:09 pm
Gerald Harris

Executive Director J. Robert White announced during the Executive Committee today (March 13) that he will retire effective Dec. 31. He celebrated his 25th anniversary with the Georgia Baptist Mission Board at the recent annual meeting in November. JOE WESTBURY/Index

DULUTH — In an announcement that caught almost everyone by surprise Georgia Baptist Mission Board Executive Director J. Robert White read a letter to his Executive Committee today signaling his intention to retire from the position he has held for over 25 years.

White, age 71, announced that his retirement would become effective on December 31, 2018, when he will have completed 26 years as the executive director of the state’s Baptist Mission Board.

When the search team from the Georgia Baptist Convention was seeking someone to fill the vacancy left by the retirement of Executive Director James N. Griffith, they recalled White’s successful ministry in Carrollton and expressed an interest in him becoming Griffith’s successor.

However, God’s providence eventually overruled the challenging circumstances that prevailed and White allowed his name to be submitted to the Executive Committee as the executive director and he received a unanimous vote.

During the course of his more than 25 years of service to Georgia Baptists, White has faced some formidable situations including the divisions created by the Conservative Resurgence, the conflict with Mercer University, the near-theft of Shorter University, and a devastating economic recession necessitating critical staff reductions.

Through it all J. Robert White has maintained a steady hand of leadership and the Georgia Baptist Mission Board is very likely the crown jewel among the state Baptist conventions in America.

During White’s tenure the Convention passed an historic resolution on racial reconciliation, developed and adopted the phrase “Serving Christ by Strengthening Churches” as the “Main Thing,” established the Georgia Baptist Health Care Ministry Foundation with a corpus of $130 million to create a “Hospital Without Walls,” and relocated the Georgia Baptist Missions and Ministry Center from Flowers Road in Atlanta to a five-story, 150,000 square-foot, state-of-the-art building on the most desirable 43.8 acres of real estate in Gwinnett County. The debt on the building was paid in full on March 2015 when White received a check of $25,631,330.13 from the Georgia Baptist Health Care Ministry Foundation. 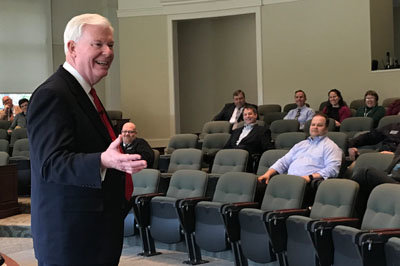 White reflects on his quarter-century tenure during a meeting with staff following the Executive Committee meeting. He pledged to remain as strong of a supporter of the Cooperative Program in retirement as he was as a pastor and state convention leader. JOE WESTBURY

The Georgia Baptist executive director is known for his powerful and passionate preaching, his zeal and effectiveness as a soul winner, his wise and competent leadership, his gracious and compassionate concern for his staff and ministers across Georgia, his advocacy and promotion of the Cooperative Program, his love and devotion for his wife, Janice, and their family, his quick wit and engaging sense of humor, and his Christian statesmanship that has won him the respect of his peers and Christian leaders across the nation.

During the past 25 years under the leadership of Dr. J. Robert White Georgia Baptist churches have baptized 783,740 new believers and given more than $2.276 billion to missions.

To Georgia Baptists, White’s retirement announcement signals the end of an era – an era of heavenly blessings and substantial growth. Baptist life is sometimes characterized by many dangers, toils, and snares, but for many Georgia Baptists the last 25 years have been like a spiritual Camelot. He will be greatly missed, but his staff and Baptists across the state will savor the next nine months of his leadership.

Amidst the shock and sorrow of today’s announcement, Executive Committee Chairman Andy Childs receivde the authority from the EC to appoint a search committee to seek White’s successor.

Dr. White read the following letter announcing his retirement at the conclusion of the Executive Committee meeting:

THE EXECUTIVE COMMITTEE OF THE BAPTIST CONVENTION OF THE STATE OF GEORGIA:

It is with a heart full of gratitude and profound appreciation for each of you, and for the churches of this beloved convention that I thank you for the great privilege of serving as your executive director for more than twenty-five years. The time has come for me to announce my retirement effective December 31, 2018. On that date, God will have allowed me to serve among you for twenty-six years.

When Janice and I packed up our three daughters and our possessions and moved to Duluth, Georgia in late 1992 in order to begin our ministry among you, there was no way that we could have envisioned all the amazing things God would allow us to experience as we served among you. Preliminary to our decision to accept your invitation, I experienced a great struggle. I never imagined that God would call me out of the pastorate to enter ministry through a denominational position, but the call could not have been more clear. I knew that this was God’s will and that assurance has been multiplied time and time again through these years.

You have become my dear friends, and I love you. I love your associations and your churches. I love this mission board. I love our staff family. The wonderful people who serve in this building and those who serve in different places across our state have become family to me. They are the most dedicated servants of Christ with whom I have ever served.

Just know that you have impacted my life and you have left a lasting impression on my heart.

In a true sense, a minister of the Gospel never retires. I have every intention to continue serving the Lord, continue preaching the Gospel and seeking ways that I can continue to serve Georgia Baptists. I will do everything I can to be an encourager and helper to our new executive director. My heart is to serve him and you.

At this juncture in my ministry the words of my favorite hymn ring in my heart:

Great is Thy faithfulness, O God, my Father,

There is no shadow of turning with Thee;

Thou changest not, Thy compassions, they fail not;

As Thou hast been, Thou forever wilt be.

All I have needed, Thy hand hath provided;

Great is Thy faithfulness, Lord unto me!