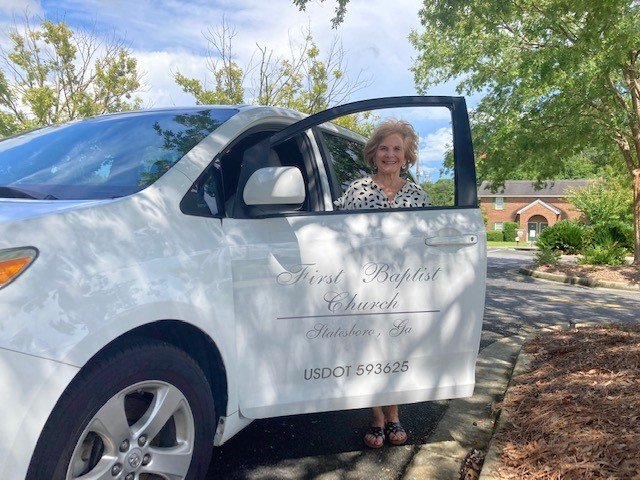 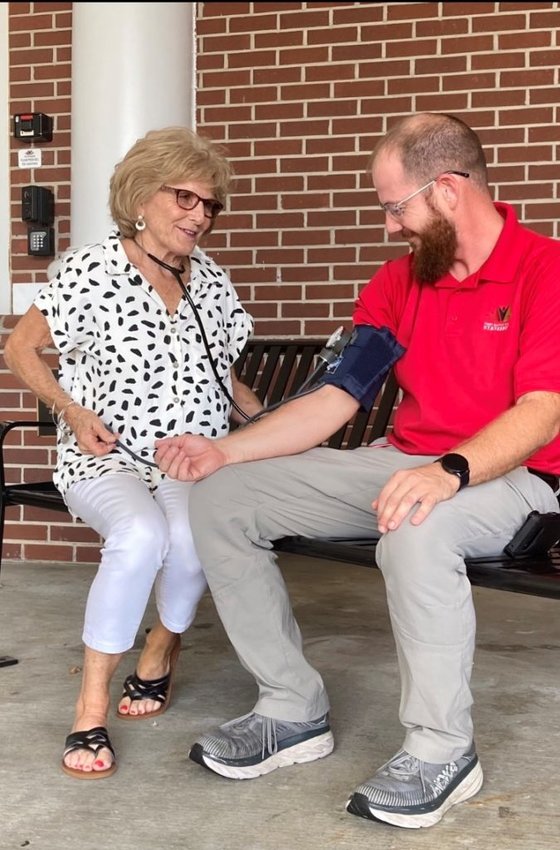 Nurse Jane Dekle poses with the van she uses to do wellness checks for homebound members of First Baptist Church in Statesboro. She plans to retire at the end of the month.

STATESBORO, Ga. – While the pastoral staff at First Baptist Church ministers to the spiritual needs of more than 2,500 members, Jane Dekle tends to their physical needs.

On any given day, Dekle might be called on to do something as simple as apply a Band-Aid to the scraped knee of a child in the Statesboro church’s preschool program or as weighty as holding the hand of an elderly lady as she passes from this world into the next.

Dekle plans to retire effective Aug. 31, ending a career that endeared her to countless Statesboro families.

When Dekle hired on 23 years ago, she developed an exhaustive list of duties and responsibilities. At the top of that list, she said, was simply being a friend to the people who needed her.

It’s her job to inspire churchgoers to take care of their physical health by eating right and exercising and to help them to manage chronic illnesses.

For the homebound, she helps arrange doctor appointments, and, when needed, drives them to those appointments.

She does wellness checks for elderly church members, bringing along her stethoscope and blood pressure cup to measure vitals. She administers injections. She changes bandages for folks recovering from surgery. She tends to bedsores.

She manages the church’s inventory of hospital beds, walkers, wheelchairs, portable commodes and other pieces of equipment that are loaned out to members who have reached the season of life where such things are necessary.

She schedules caregivers for elderly members when they need around-the-clock care. She arranges for flu shots to be administered at the church each fall. She sets up blood drives for the American Red Cross and makes sure all the church members know the importance of donating.

On occasion, she delivers meals to homebound residents. She has even been known to repair broken toilets for elderly ladies who can’t do it themselves.

She accompanies grieving families to funeral homes to help them make arrangements for loved ones who have died.

Most importantly, her clients say, she shines the light of Christ everywhere she goes.

“Some of the folks she visits may not see another person for days, so they’re thrilled when Jane shows up,” said Administrative Pastor Keith Hagan. “Just her countenance, her disposition, her caring, her compassion, lifts people up. Some of our folks who are homebound, just for Jane to be able to show up, they love that, and they love her. Jane is a highly regarded individual. She has cared for so many people in so many different situations.”

Dekle, who graduated from nursing school in 1967, said she has been blessed to serve at First Baptist.

“It’s so rewarding when I go home at night and I’ve been able to accomplishment something for someone,” she said. “I do a lot of listening, just being there as a friend, not just a nurse.”

In 1986, First Baptist Statesboro became one of the first congregations in the nation to add a staff nurse when, according to minutes from a deacon’s meeting, a family gave “a sizeable gift” for the care of people who are terminally ill and homebound. Interest from that gift helps cover the cost of the nursing ministry.

The gift put First Baptist at the forefront of a national movement that has made church nursing a widely accepted profession in congregations from coast to coast. Their first nurse, Roslyn Bullard, served 11 years. Dekle replaced her.

Marla Bourne, a retired teacher, said Dekle was there for her during the illness and subsequent death of her mother-in-law, Vera, and later of her husband, Jim.

First and foremost, Bourne said, Dekle was a compassionate friend in the most difficult times of her life. Bourne said it was especially helpful to have Dekle around to translate medical lingo into understandable English.

“I don’t know how to express how helpful those things were,” Bourne said. “What it did was take an extra burden away. I deeply appreciate all the advice and help, all rendered in such a gentle way. She was someone I could talk to. She was invaluable.”

Monica Lanier, who describes Dekle as “absolutely wonderful,” had been aware that First Baptist Statesboro has a highly regarded nursing ministry, but she hadn’t personally experienced it until her 86-year-old father had a stroke.

“I would talk to Jane about the things the doctors would tell me, and she would help me understand and analyze what they were saying,” Lanier said. “She really was just a tremendous resource.”

But most importantly, Lanier said, Dekle prayed for her father, who is doing well now, and for her and her family.

“She prayed for us every day,” Lanier said. “We were covered in prayer.”

Dekle said she counts it a huge blessing that the Lord has allowed her work in a job she has loved so much.