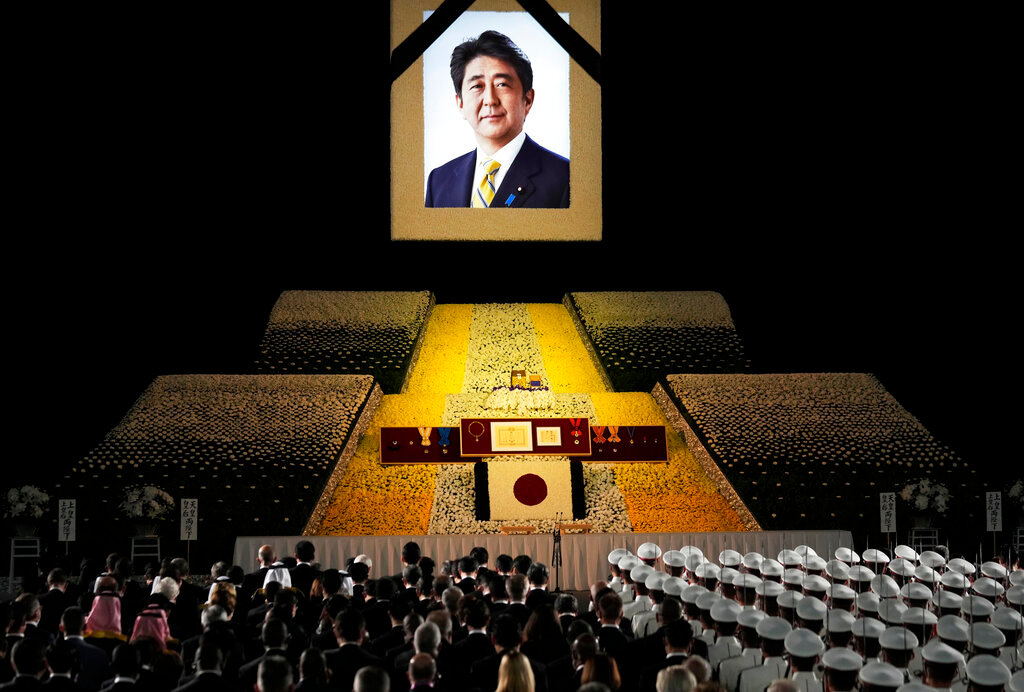 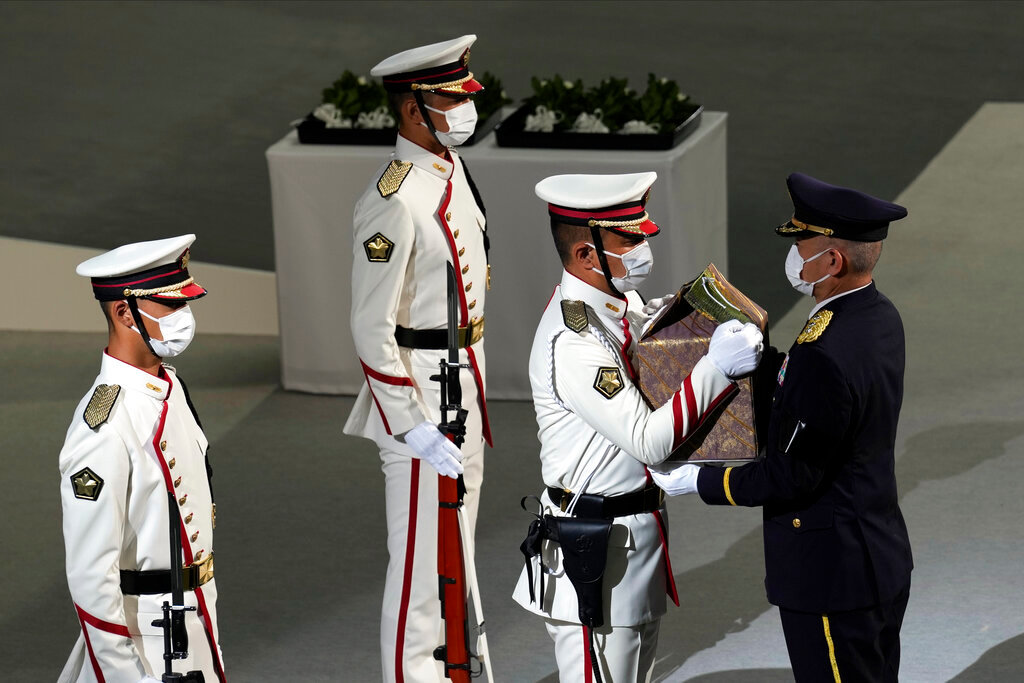 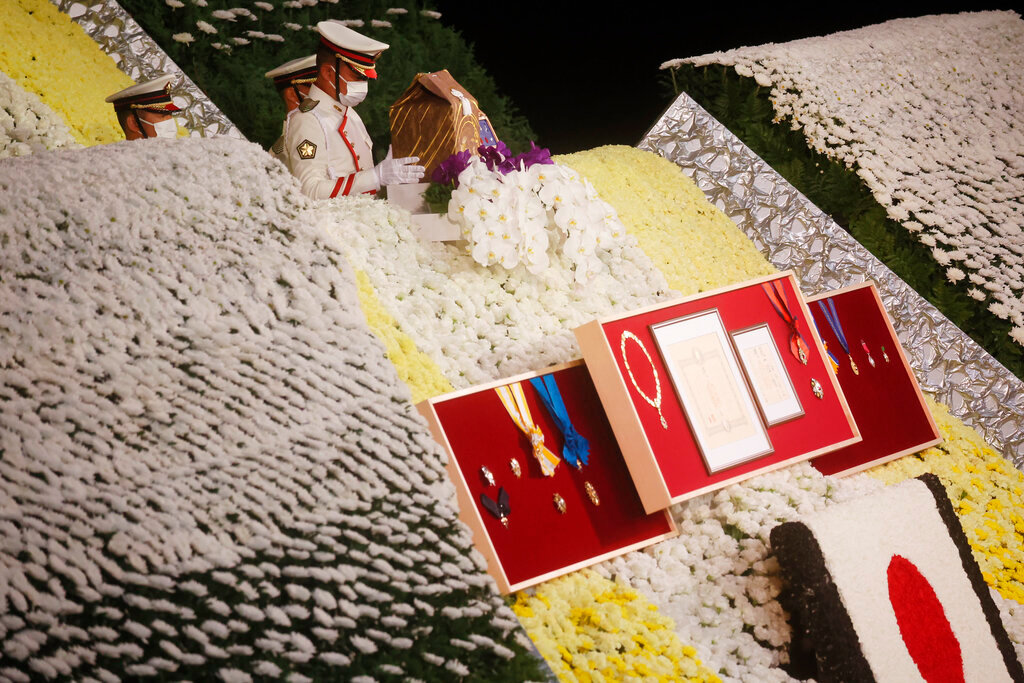 Former Prime Minister Shinzo Abe's urn is on top of a wall of flowers at his state funeral, Tuesday, Sept. 27, 2022, in Tokyo. (Leah Millis/Pool Photo via AP) 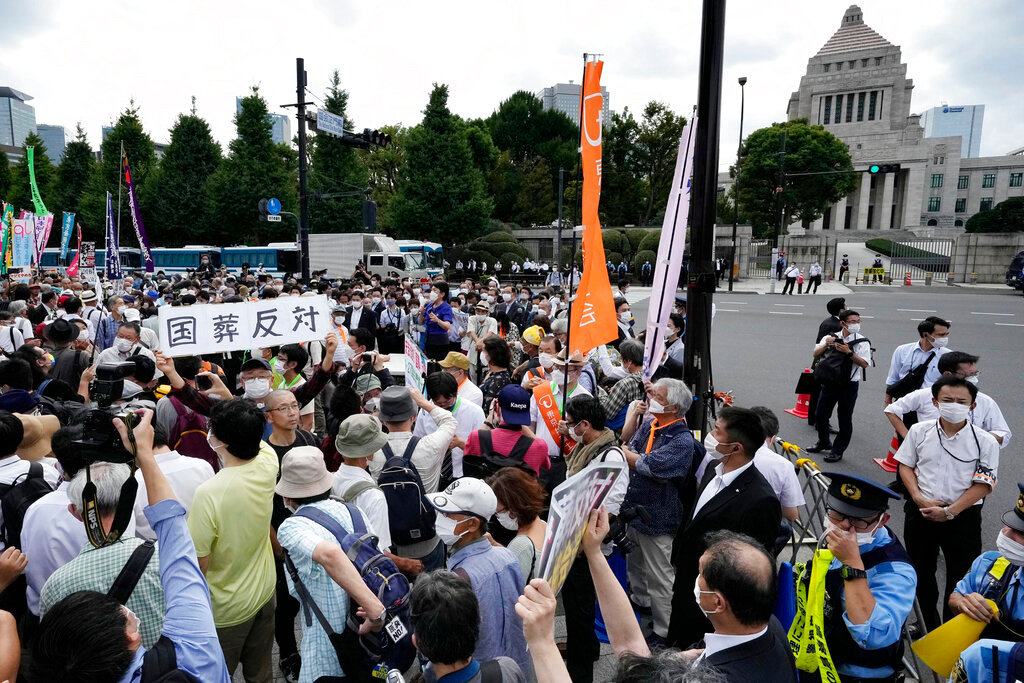 TOKYO (AP) — Japan's assassinated former leader, Shinzo Abe, was given a rare state funeral Tuesday that was full of military pomp and surrounded by throngs of mourners as well as by widespread protests, with thousands taking to the streets in opposition.

It began with Abe's widow, Akie Abe, in a black formal kimono, walking slowly behind Kishida into the funeral venue, carrying an urn in a wooden box wrapped in purple cloth with gold stripes. Soldiers in white uniforms took Abe’s ashes and placed them on a pedestal filled with white and yellow chrysanthemums and decorations.

Attendants stood while a military band played the Kimigayo national anthem, then observed a moment of silence before a video was shown praising Abe's life in politics. It included his 2006 parliamentary speech vowing to build a “beautiful Japan," his visits to disaster-hit northern Japan after the March 2011 tsunami, and his 2016 Super Mario impersonation in Rio de Janeiro to promote the 2020 Tokyo Olympics.

Kishida, in a 12-minute eulogy, praised Abe as a politician with a clear vision for post-World War II economic growth who promoted national security, the development of Japan and the world, and a “free and open Indo-Pacific” as a counter to China's rise.

“You were a person who should have lived much longer,” Kishida said as he looked up at a massive photo of Abe. “I had a firm belief that you would contribute as a compass showing the future direction of Japan and the rest of the world for 10 or 20 more years."

Kishida said Abe will be remembered not just as the nation's longest-serving leader but for what he achieved, and he pledged to carry on Abe's policies for Japan and the region.

Abe was cremated in July following a private funeral at a Tokyo temple days after he was assassinated while giving a campaign speech on a street in Nara in western Japan.

Tokyo was under high security for the state funeral, especially near the venue, the Budokan martial arts hall.

At a protest in downtown Tokyo, thousands of people marched toward the hall, some banging drums and many shouting or holding banners and signs stating their opposition.

The government maintains that the ceremony was not meant to force anyone to honor Abe. But the decision to give him the rare honor, which was made without parliamentary debate or approval and the high cost have led to anger about the event.

Kishida has also been criticized because of a widening controversy over decades of close ties between Abe and the governing Liberal Democratic Party with the Unification Church, accused of raking in huge donations by brainwashing adherents. The suspect in Abe’s assassination reportedly told police he killed Abe because of his links to the church, which he said took large amounts of money from his mother, bankrupting his family and ruining his life.

Outside the Budokan hall, thousands of people carrying bouquets queued for several blocks to lay flowers in a nearby park.

“I'm emotionally attached to him and I've been supporting the LDP, too," Masayuki Aoki, a 70-year-old business owner, said, recalling that he shared a fist bump with Abe at a campaign stop in Yokohama days before his assassination. “I came to offer him flowers."