Tens of thousands of Christmas week travelers were stranded at Hartsfield-Jackson Atlanta International Airport on Dec. 17 due to a massive fire in a tunnel carrying the airport's major electrical wiring. SHERRI BROWN/Special

LaGRANGE — At 23 years of age Jenna Brown has established herself as a world traveler, moving between airports of all sizes from her home base in Morocco.

She navigates the streets of Casablanca with the ease of getting around LaGrange, drawing upon Uber and taxis to reach her destination. When further afield in the North African nation she uses a network of trains.

But she never expected that returning to Atlanta would be like arriving in a Third World nation where someone forgot to pay the electric bill.

Brown, who was born in Atlanta and grew up in LaGrange, was returning home for the holidays on Sunday when she was stranded for 5 hours on the airport tarmac. Rather than taxing to the gate she and fellow passengers found themselves among 60 planes waiting for a gate … with no power in the sprawling Hartsfield-Jackson Atlanta International Airport. 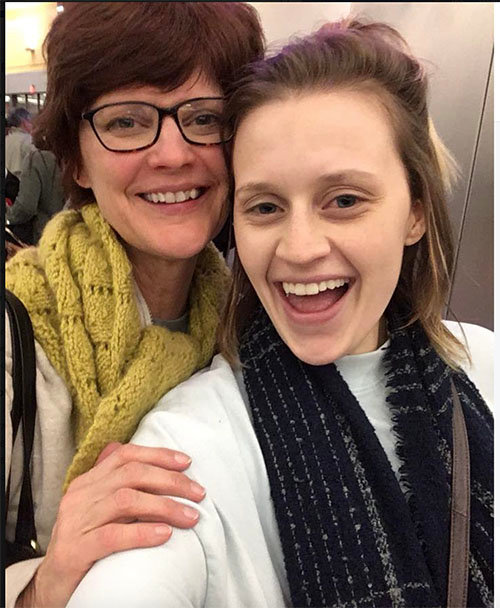 Jenna Brown, right, is excited to be finally reunited with mother Sherri after sitting on the tarmac for 5 hours after an 11-hour international flight from Morocco. JENNA BROWN SELFIE/Special

A vaguely explained electrical outage had shut down the world’s busiest airport and disabled its backup system, causing an extended traffic halt like few had seen since 9/11. The skies over Atlanta were suddenly quiet and empty of airplanes for nearly 12 hours.

It was a holiday homecoming she will long remember, Brown says.

“I had left Casablanca 11 hours earlier via Frankfurt on Lufthansa and was ready to get off the plane and stretch my legs. I had slept a good bit of the trip and didn’t know anything was wrong until I woke to the pilot’s announcement; he was explaining that there was an electrical problem at the airport and we would possibly be rerouted to another city.

“We actually landed just a couple of minutes behind schedule at 3 p.m. and expected maybe a 15- or 20-minute delay. We did not know the problem had been snowballing for nearly three hours,” she adds.

That’s when the pilot broke the news that they were behind another international flight that had been waiting for 3 hours to get to a gate … and it didn’t look too promising.

Meanwhile, her mother Sherri had already arrived at the airport after her 90-minute drive from LaGrange, expecting an uneventful Sunday afternoon reunion. The minister’s wife found herself in a massive traffic jam and, as she entered the international terminal, found security personnel patrolling with automatic weapons strapped over their chests.

There was no power but, thankfully, that terminal has large floor-to-ceiling windows so there was plenty of light. But the further she moved from the ticketing area the darker and much colder it became. 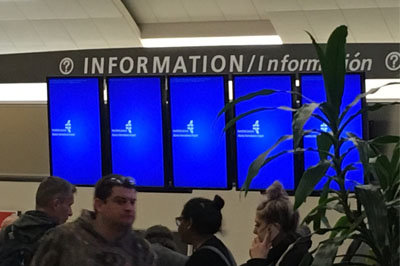 For nearly 12 hours on Sunday the monitors at the world's largest airport remained darkened ... and then offered just a field of blue when power was restored and flights remained suspended. SHERRI BROWN/Special

One hour dragged into two, then three, and then four. She could not contact Jenna because her daughter had an international cell phone that did not work in the States. Meanwhile, Sherri Brown kept searching for a cell signal for any news she could find, which was draining her phone … when she could get online.

And of course she was Facebooking the entire event to her followers, keeping true to her journalistic profession and reporting from the field. That didn’t help her cellphone battery last.

She eventually drove to a nearby Target, the closest place she would find an electrical outlet to charge her phone and have better access to updates.

“Everyone at the airport completely overwhelmed the limited network, if they could get access at all. It was unnerving seeing the high level of security for just a power failure; you didn’t know if something more serious was afoot but we were not being told,” she adds. 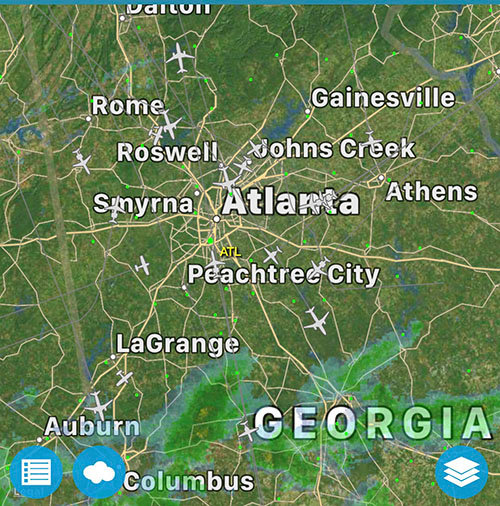 On Sunday afternoon the normally crowed skies over Atlanta were quiet and the only airplanes were overflying the city enroute to other destinations. FLIGHT TRACKER/Joe Westbury

Chic-fil-A broke its tradition of not opening on Sunday by calling in volunteers to its nearby stores and quickly preparing and delivering free chicken sandwiches to the crowd. Pallets of water were brought in to assuage the thirst of travelers who could not get refreshment from the powerless drinking fountains.

Brown and her fellow passengers, meanwhile, were allowed by the German crew to walk around the plane and stretch their legs and avail themselves of any remaining snacks and water. Jet lagged, she even sprawled out on her empty row for a nap.

While passengers on domestic flights were allowed to deplane as gates became available, they entered a surreal world of their own…packed concourses where people were entering from the gates but those at the gates could not board the plane. People were struggling to get to the stopped escalators to walk to the terminal by the light of their quickly dying cell phones.

Brown’s flight, however, could not discharge because Customs had no power and international passengers could not be processed to enter the country. The afternoon and evening turned into a comedy of errors from which few were laughing. 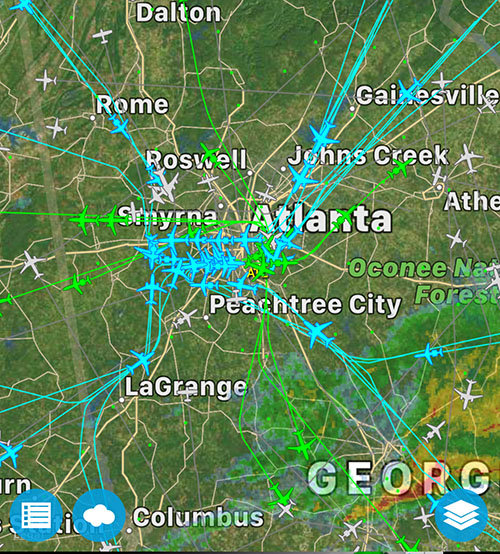 This afternoon shows a typical crowded air traffic day in Atlanta after flights were back on schedule at the world's busiest airport. FLIGHT TRACKER/Joe Westbury

Eventually, five hours after she landed, her plane moved to a gate as power was restored first to the international terminal. Those in the domestic terminal and concourses A through E would remain in the dark until nearly midnight.

Brown was never so glad to see her mother, she says, after the 11-hr flight had  turned into 16 hours on the plane.

Now that she is home she is glad to be with family, which includes father Greg and sisters Hannah and Chelsea. She will be visiting grandparents Everett and Nancy Anthony in Marietta. Everett is retired from the Home Mission Board as longtime director of missions for Chicago and a NAMB church planter strategist.

But first on her agenda is catching up on her sleep and warding off the jet lag before Christmas.

But that’s not the end to the story … there was one more irony to the never-ending day. The parking lot had full power to raise and lower the gates and, most importantly, to collect the fees.

“The parking lot had full power and the attendants had no problem taking our $14 for the afternoon. Even the gates opened and closed like there was no problem,” she says with a laugh.

Brown teaches traditional second grade curriculum at an American school for students in Pre-K through grade 12 in Casablanca, Morocco. The school is owned by Moroccans and allows an immersion experience for students to become fluent in English. She has just signed up for a third year of employment. 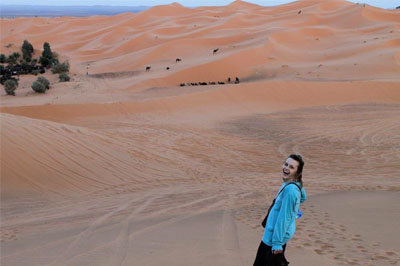 Jenna Brown enjoys a side trip outside of Casablanca and an encounter with camels as a teacher in Morocco. JENNA BROWN COLLECTION/ Special

“Moroccans as among the nicest people in the world,” she relates. “They have a strong hospitality culture with delicious food and they love to share what they have, just like I grew up with in the South. There is an informal saying that if you look a Moroccan in the eye they will invite you into their home.”

Brown’s father, Greg, recently founded West Georgia Biblical Counseling, based out of Troop Baptist Association. He had served for nearly a quarter century at Western Heights Baptist Church in LaGrange. He also serves as a coach and mentor for master’s students in career development and spiritual formation at Impact 360.

Brown’s mother, Sherri, a former newspaper reporter and Southern Baptist journalist, currently serves as director of Circles of Troop County. The non-profit works to identify and eliminate the causes of poverty and support those wishing to lift themselves out of poverty. It uses a relational strategy to support adults and their children out of poverty while inspiring and equipping the community to reduce its poverty rate.