Jesus film translated into 2,000th language thanks to voice of seminary student 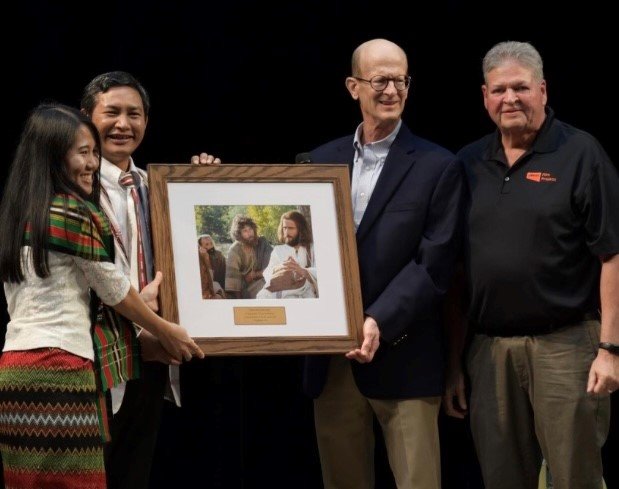 Mang Siing, second from left, receives a framed still of the Jesus film as a gift for helping translate the film into its 2,000th language.
Posted Sunday, November 27, 2022 12:45 pm
By TIMOTHY COCKES, Baptist Press

FORT WORTH, Texas (BP) – Texas seminary student Mang Siing recently became a part of history when he served as the narrator for the Zo language translation of the world-famous Jesus film. The effort marked the film’s 2,000th available language.

Jesus  depicts the life and ministry of Christ, and is the world’s most translated film, according to Guinness World Records. Since its release in 1979, it has been viewed by billions of people around the world and resulted in more than 600 million decisions for Christ, according to statistics on the film’s website.

Siing, who is pursuing a Ph.D. in missions with a minor in evangelism at Southwestern Baptist Theological Seminary, was approached through a connection with the evangelical organization Cru (formerly Campus Crusade for Christ) about leading the translation project for the film in the Zo language.

Siing, who is from Myanmar, said Zo is one of more than 50 different dialects of the Chin people group, and was of the last of the Chin languages to receive a biblical translation. The New Testament translation of Zo was completed about 10 years ago, followed by the entire Bible in 2018.

Aside from the Bible and a few Christian hymns, Siing said there is a lack of Christian content or resources in Zo. Many tribes do not even have access to the internet.

He is thrilled the translation of the Jesus Film will change that forever.

“I was so excited, and our people were so excited,” Siing said. “I thank God for the opportunity and God has blessed our community with this.

“We don’t have any movie or film in our language, much less The Jesus Film. We were all excited, and we really know that Jesus is our King and Savior, so for Him to speak our language is a great opportunity. This is a milestone for our people group.

“Jesus will speak our language, and he will speak to us directly. Just as the Bible said God remembered Abraham and he remembered Noah, God also remembers us and He doesn’t forsake us.”

Siing worked with representatives from the film to begin the recording process, and Cru assisted by renting a local recording studio to complete the voiceover work.

The role Siing played with the voiceover was providing the lines for the film’s narrator. He also enlisted 28 other people from the Zo community in Fort Worth to provide voices for other characters, including Jesus, Mary and several children’s voices. The full recording process took around 16 hours for Siing, and a full week of days and nights overall.

The local Zo community was so excited about the project that they partnered with both Southwestern and representatives from the Jesus Film to host a premiere showing on the school’s campus in October.

Nearly 200 people attended the celebration, and Siing was presented with several gifts including framed artwork with Scripture (including Revelation 7:9), and a framed still of the movie.

Siing wishes to continue to partner with Cru’s Jesus Film Project, which focuses on translating the film and transporting it to be played around the world. Showings of the film in Zo in various Myanmar communities are in process.

Beyond the film, Siing also ministers to Burmese-speaking refugees in Fort Worth, where he pastors International Harvest Church and Ministries, a church with services in both Zo and Burmese.

The church was planted with the support of the Southern Baptist Convention of Texas (SBTC) and meets at Grace Fellowship Baptist Church near Southwestern’s campus.

Siing said he is grateful for the ministry education he receives at SWBTS, and the spiritual fruit being borne among the Chin people in the community.

“I enjoy school very much and this is the right place for me and my family,” Siing said. “I’m very proud of Southwestern.”

Siing is praying this monumental moment will have eternal ripple effects.

“I will utilize this film to reach out to not only our people group, but also other people groups who do not know Jesus,” Siing said. “It is a great strategy and material in which people can learn the Gospel in a visual and verbal way.

“This is significant and remarkable for me and our whole people group because it will last forever, from generation to generation. It is an eternal thing. I pray and believe that through the Jesus Film, many of our people will be revived spiritually and also some will come to a personal relationship with Christ.

“I pray that Jesus will speak to us through the film, and there will be revival and transformation. I pray He will empower us by His Holy Spirit and the Word of God to be disciple makers across the globe. That is my prayer, my desire and my expectation through the film.”