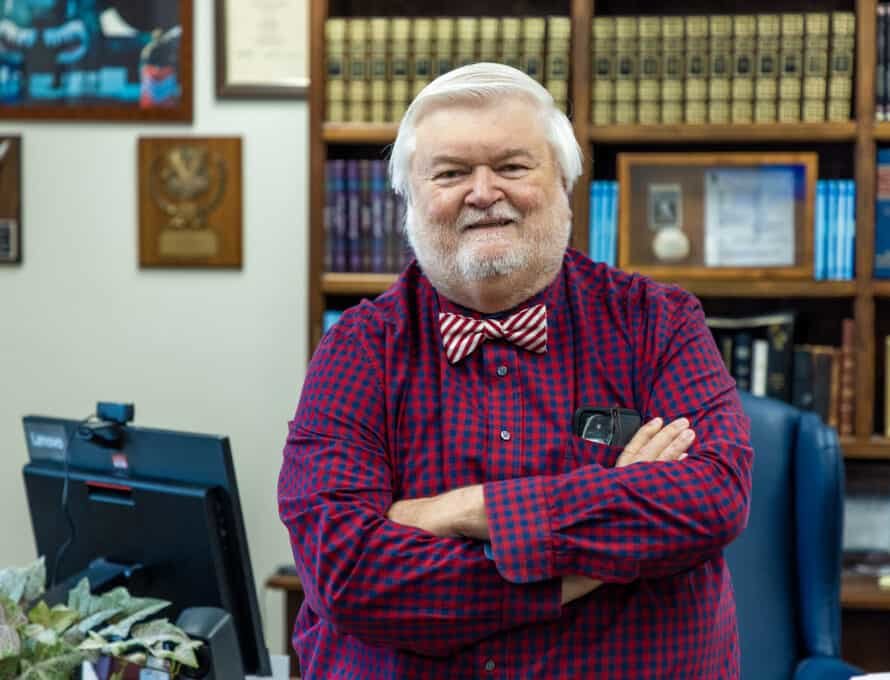 JEFFERSON CITY, Mo. (BP) – Missouri Baptists are mourning the loss – and celebrating the life – of Don Hinkle, 68, founding editor of The Pathway. Many have expressed their condolences in comments to a Sept. 22 post on The Pathway’s Facebook page sharing the news of Hinkle’s death.

“With great sorrow, we learned tonight (Sept. 22) that Don Hinkle, founding editor of the Missouri Baptist Convention’sPathway newspaper, has gone home to be with the Lord Jesus.” the Facebook post reads.

“… During his two decades of service at The Pathway, Don deeply loved serving the Lord and serving Missouri Baptists through Christian journalism and through his public policy work at the Missouri Baptist Convention. Don fought the good fight, kept the faith and finished the race. With hope in Christ, we heartily believe he has now received the Lord’s commendation, ‘Well done, good and faithful servant.’”

A memorial service to celebrate Hinkle’s life has been scheduled for Friday, Sept. 30, at 11 a.m. at Concord Baptist Church in Jefferson City, where he was a member.

Hinkle was preceded in death by his wife, Bernadette.

Only a few weeks before his death, Hinkle announced his intentions to step aside from his role at the Baptist state newspaper to focus entirely on his role as the Missouri Baptist Convention’s public policy advisor.

After hearing the news of Hinkle’s death, Missouri Baptist Convention President Jon Nelson wrote on his church’s website, “The day his transition was announced, I had the opportunity to say ‘Thank you’ for his years of service and express my excitement of his next venture. If you knew Don, you knew that he cared deeply about serving churches and consistently helped Baptists across the nation to articulate a biblical worldview in all aspects of life.

“Whenever we would visit, we would talk about everything from Jesus, politics, sports, bowties and the state of journalism amongst other things,” Nelson said. “Under his leadership, Missouri Baptists experienced many years of Kingdom service. While I am sad to see him pass, I know he is in heaven reunited with his sweet Bernadette and walking the Streets of Gold! Nevertheless, I have hope that I will see them both again in glory as we worship at the Throne of the Lamb, but for now we grieve, knowing that the Lord gives and the Lord takes away.”

During Hinkle’s 20-year tenure as editor, The Pathway has become the fourth largest paid circulation newspaper in Missouri, and its print and online editions have won numerous professional awards. The paper recently marked its 20th anniversary.

“Don Hinkle is an exceptional journalist and extraordinary statesman who loves Southern Baptists,” Hall said. “In that regard, he came to Missouri to launch The Pathway. But his reach was much greater because he positively influenced the direction of evangelicalism in America.

“Don is a friend who sticks closer than a brother.”

Hinkle was also well-known and well-respected for his work in public policy, according to Missouri State Representative Doug Richey, who serves as senior pastor of Pisgah Baptist Church, Excelsior Springs.

“It was always encouraging to meet with Don’s big smile or inquisitive brow,” Richey told The Pathway. “I was blessed, both as a Missouri Baptist pastor and as a legislator, to know Don as a friend. I was always certain that his commitment to a biblical worldview would reign supreme no matter his endeavor. Don was known around the Capitol as a straight-shooter and a capable advocate for religious liberty and pro-life causes. I already miss hearing his slow, southern voice.”

Born Sept. 14, 1954, Hinkle was the son of Cecelia and the late Tracy Hinkle. The oldest of three children, he was a 1972 graduate of Springfield High School in Springfield, Tenn., a small farming community 25 miles north of Nashville. A lifelong Southern Baptist, he was saved and baptized at Grace Baptist Church in Springfield in 1964.

Hinkle began his journalism career as a newsman for WDBL Radio in Springfield in 1975. He joined the U.S. Air Force in 1977, serving 10 years as a newspaper reporter, editor and consultant for two base newspapers and a major command news service (the former Tactical Air Command). He won the Thomas Jefferson Award in 1981 as the top news writer in the Department of Defense for his reporting of President Ronald Reagan’s firing of striking FAA air traffic controllers. His newspaper, The Skywrighter, the largest circulation newspaper in the Air Force, also won the Thomas Jefferson Award that year as the top newspaper in the Department of Defense. He was awarded the Air Force Meritorious Service Medal and was honorably discharged in January 1988, returning to his hometown.

Hinkle continued his journalism career, working for three major metropolitan daily newspapers. He was a sports writer and copy editor for The Daily Press of Hampton/Newport News, Va., a business reporter for The Tennessean in Nashville, and a sports writer and general assignment reporter for The Courier-Journal in Louisville, Ky. Most recently he was, first, a business reporter, and then editor of The Daily Herald in Columbia, Tenn.

Hinkle studied at the Acton Institute for the Study of Religion and Liberty in Grand Rapids, Mich., and the WORLD Journalism Institute in Charlotte, N.C. He was a fellow with the Colson Center for Christian Worldview in Colorado Springs, Colo.

He also has worked as a news writer for Southern Seminary’s public relations department and had articles published by Lifeway Christian. Additionally, he served for a time as a national correspondent for Baptist Press.