Kendrick brothers expect newest movie, 'Show Me the Father,' to have powerful impact when it hits theaters Sept. 10 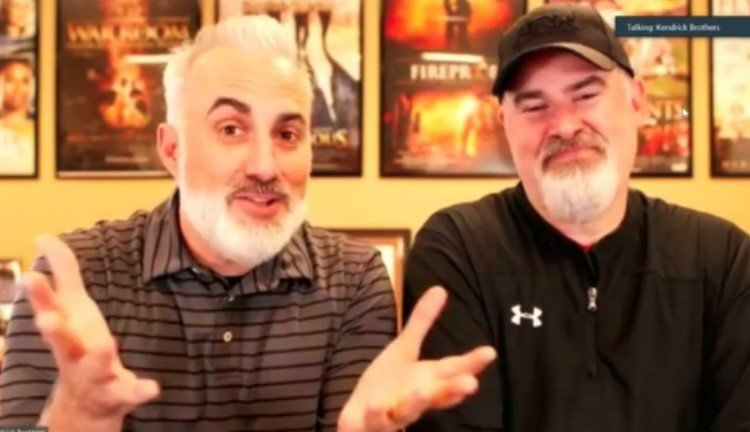 Stephen and Alex Kendrick talk about their latest movie, Show Me the Father, during the Georgia Baptist Mission Board's SPARK conference on Thursday.

DULUTH, Ga. – The Georgia brothers who carved out a filmmaking niche for themselves with family-friendly, faith-based movies are hopeful their next project, Show Me the Father, will have a major gospel impact across the country.

“We’re praying that people have an encounter with the Holy Spirit when they see this film,” said Stephen Kendrick, one of three Georgia brothers who have produced a long line of box office hits, including their last one, Overcomer, which grossed $34.6 million when it opened in 2019 and earned an A+ CinemaScore rating from moviegoers.  Stephen and Alex Kendrick, members of Sherwood Baptist Church in Albany, Ga., shared insights about Show Me the Father in a discussion that was part of the Georgia Baptist Mission Board’s SPARK discipleship conference on Thursday.

Stephen Kendrick said the central message of the movie to those who watch it is that they are loved by God.

The emotion-filled documentary, which tells the stories of five fathers and the impacts they had on their sons, will be in theaters on Sept. 10.

“The gospel Is interwoven in the movie,” said Alex Kendrick who appeared virtually with his brother for an interview with SPARK organizers. “There have been people who, as soon as the movie is over, said I want to give my life to Christ.”

At one of the early showings of the film, he said, a woman who was working as a security guard in the theater prayed to become a Christian.

The overarching call of the movie is for father’s to step up and be Godly influences in their families.

Stephen Kendrick said fathers will leave theaters not only feeling loved by God but with a better understanding of the depth of His love.

Mark Hall and Casting Crowns, the Grammy Award winning group based in Georgia, performed some of their major songs during the conference. Hall is longtime student pastor at Eagle’s Landing First Baptist Church, a Southern Baptist church in McDonough, Ga.

The Kendricks, who appeared Thursday morning via ZOOM, have a string of box office hits including Flywheel, Facing the Giants, Fireproof, Courageous and War Room.

Christian leaders who have had advanced viewings of Show Me The Father are giving the documentary rave reviews.

“The film is powerful, transformational, and needed for all to see,” said Maurice Williams, chaplain of the Jacksonville Jaguars. “I was reminded that sons are looking to their fathers for their acceptance, love, masculinity, direction, and their spiritual inheritance.”

Alex Kendrick said the documentary tells powerful stories about the impacts five fathers had on their families.

“God gave us five unbelievable stories for this documentary,” he said. “It came together better, stronger than I thought. We’ve watched God’s fingerprints all over this thing.

“Men will feel encouraged, emboldened. They’re not going to feel beat up and beat down. They’re going to be inspired in their role, and they’re going to be walking out of the theater not only feeling loved by God but desiring to lead their families better.”