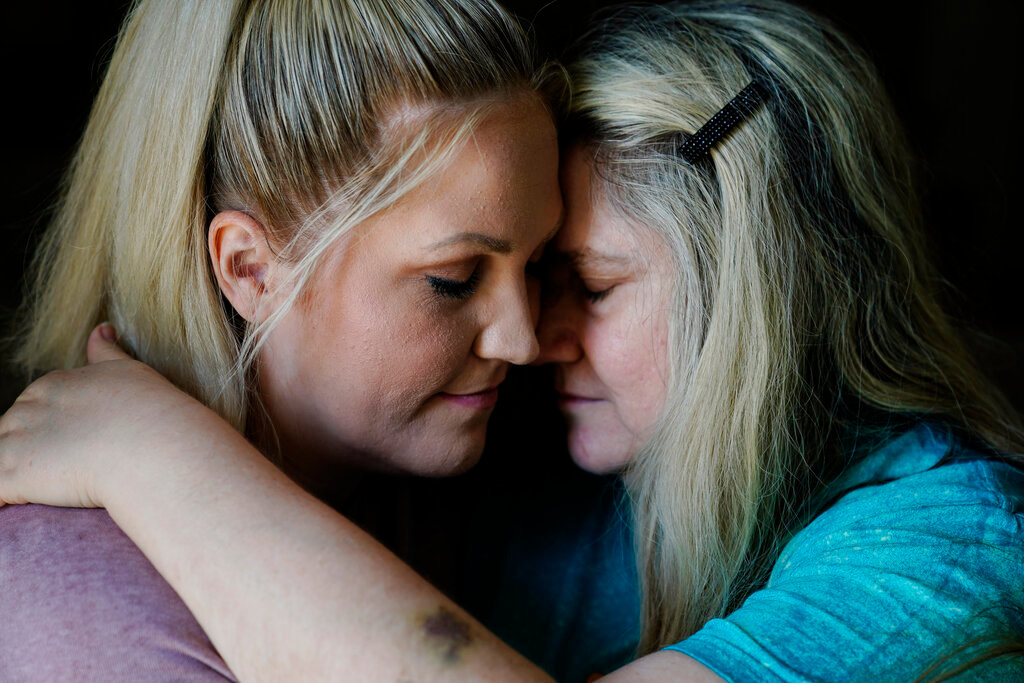 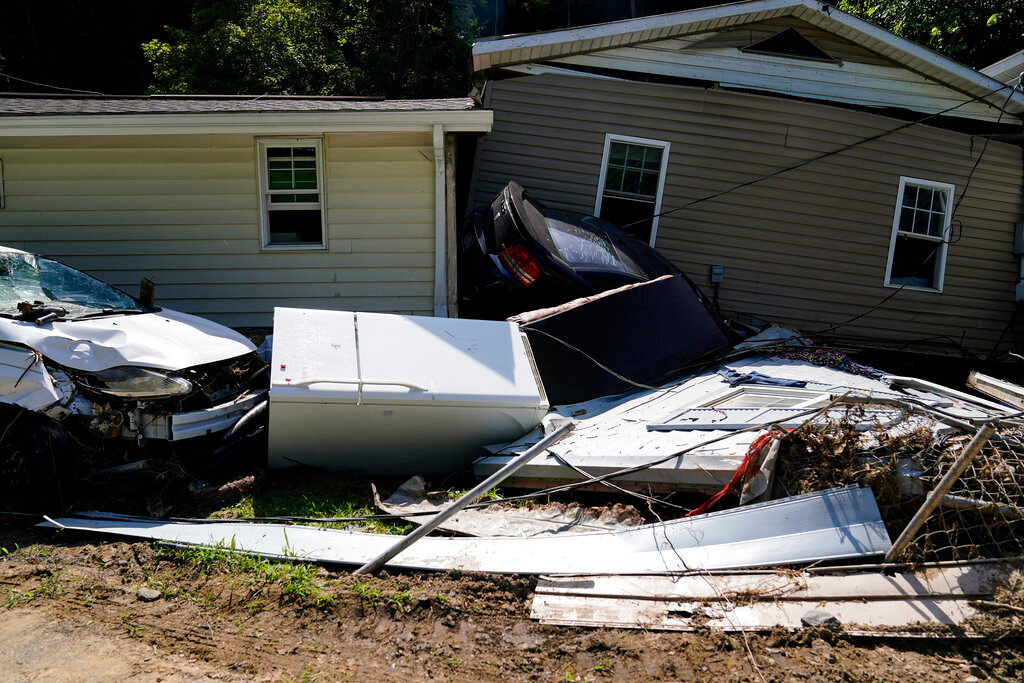 Homes lean against each other after massive flooding swept them away on Thursday, Aug. 4, 2022, in Chavies, Ky. The black car and couch is where Patricia Collins was pinned as water rushed around her. (AP Photo/Brynn Anderson) 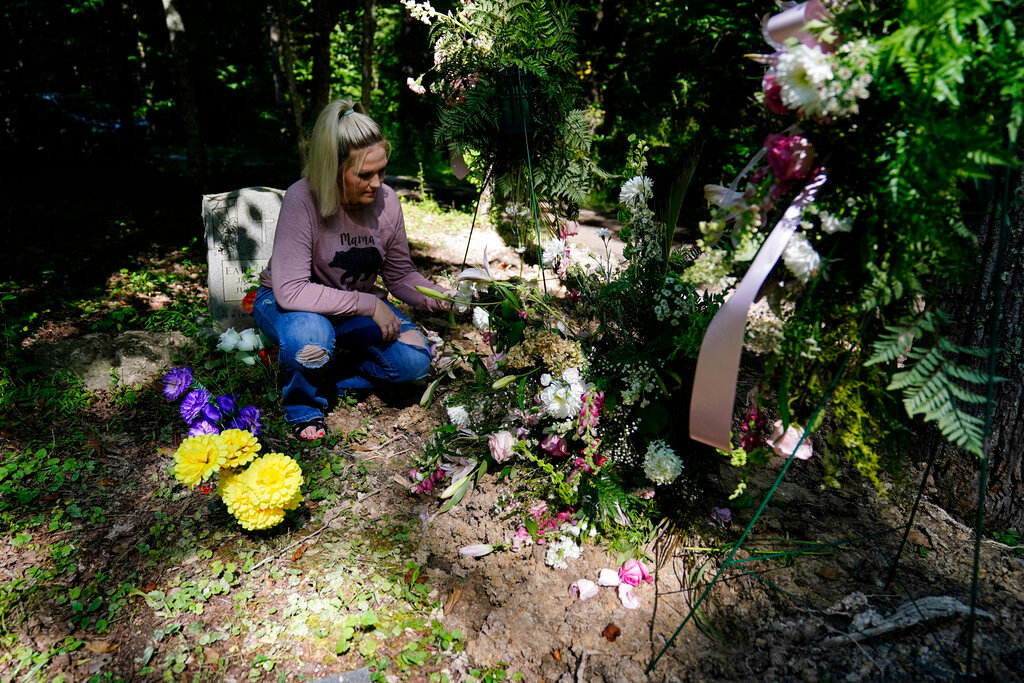 CHAVIES, Ky. (AP) — Angel Campbell should have been sitting in her usual chair in her grandmother’s living room this week, looking through her old photo albums and eating her favorite soup beans.

Now the living room is gone, and so is her grandmother.

A week after 82-year-old Nellie Mae Howard died in the devastating floods that killed at least 37 people in eastern Kentucky, Campbell can't stop thinking about how she was swept away. She said losing her “Mammaw" will plague her for a very long time.

“The way she had to leave this earth just shatters me,” she said. “It just feels so cruel.”

Eastern Kentucky has been engaged for days now in the slow, grim task of recovering and burying the dead. Local funeral homes have settled into a steady cadence of visitations and memorials, sometimes in quick succession. The somber rituals have continued as more rain falls, prompting yet another flood watch across the Appalachian mountain region. People here brace at the prospect of a new round of misery.

Funeral home workers have had to navigate the staggering losses, in communities where families have known each other for generations, some after losing their own houses. They've had to carry on without power or water at times, taking in so many bodies that a mobile refrigerator was brought in to add capacity.

No place in eastern Kentucky suffered more deaths than Knott County, where 17 people perished in the historic flooding. The local coroner, Corey Watson, knew nearly all of them.

“I was retrieving people from scenes that I had known since I was a child or I had seen that person grow up,” Watson said. “It's hard.”

The floodwaters tore families apart. Two sets of husbands and wives died. Whole families were “decimated,” the coroner said. Most of those who died were retirees, he said.

Watson said his training taught him how to compose himself, but in such an extreme situation, he wondered: “How do you properly compose yourself when you see a multitude of people passing away and there being attempts to save their life or to keep them together? It’s troubling, but we have to go through this. We have to overcome it. We can always hold their memory in our heart.”

The floods in Pine Top surged through Randall and Rosa Lee Vick's front door. ripped a huge hole in their back wall. and swept them into the dark water. Vick said he had just a split second to speak to her before they went under. “Whatever happens, I love you,” he said.

Vick was able to cling to a tree for about seven hours before Kevin Patrick and another neighbor lashed themselves together with extension cords and waded out to rescue him. They found his wife’s body miles away.

What’s left of their home came to rest on the opposite side of their normally placid creek. A neighbor has lent him a pop-up camper to live in, once he's ready.

A family friend, Jade Dollarhide, gave Vick a hug while seeing what he needs.

For some families, the funerals have offered their first chance to pause and reflect on the losses after days of digging out.

Campbell’s mother, Patricia Collins, was at home with her boyfriend next door to Howard's home in Chavies, Ky., when the storms hit. Collins went to check on her, and climbed with her grandmother onto the kitchen table, but it collapsed into the surging water.

Collins was in the water for two hours, pinned between a couch and a car. The only thing that saved her was a flashing tail light that caught the eye of her neighbors, who pulled her to safety. Battered and bruised, she never saw Howard alive again.

It took nearly five hours to find Howard's body. Campbell's brother pulled their grandmother from the water, checked for a pulse, and wiped mud from her face. Then he asked the neighbors for a sheet to cover her, and sat with her body for hours.

Both homes are now in ruins, carried in pieces hundreds of feet from where Howard had lived for half a century.

Campbell said her grandmother was like her second mother. They either saw each other or spoke on the phone every day. She can still hear her giggling on the other line, or telling her to remember to thank Jesus for all the good in her life. She was a deeply religious woman who tended to her rose garden and thanked the Lord each morning for letting her see another day.

She was the person Campbell most often went to for advice — she knew just what to say.

“I always thought one day when I had to say goodbye to her I would still get to go sit in my favorite chair and remember all the good times,” she said. “But I can’t even do that and that really hurts.”

That photo was displayed next to the white casket at her funeral this week, near a spray of roses put together by a family friend.