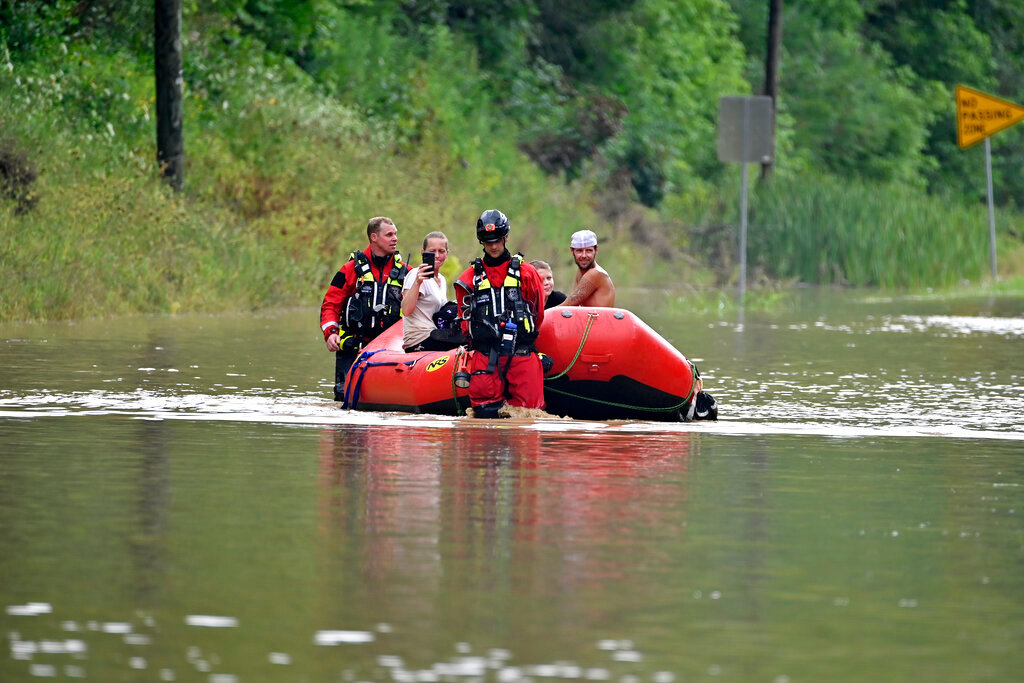 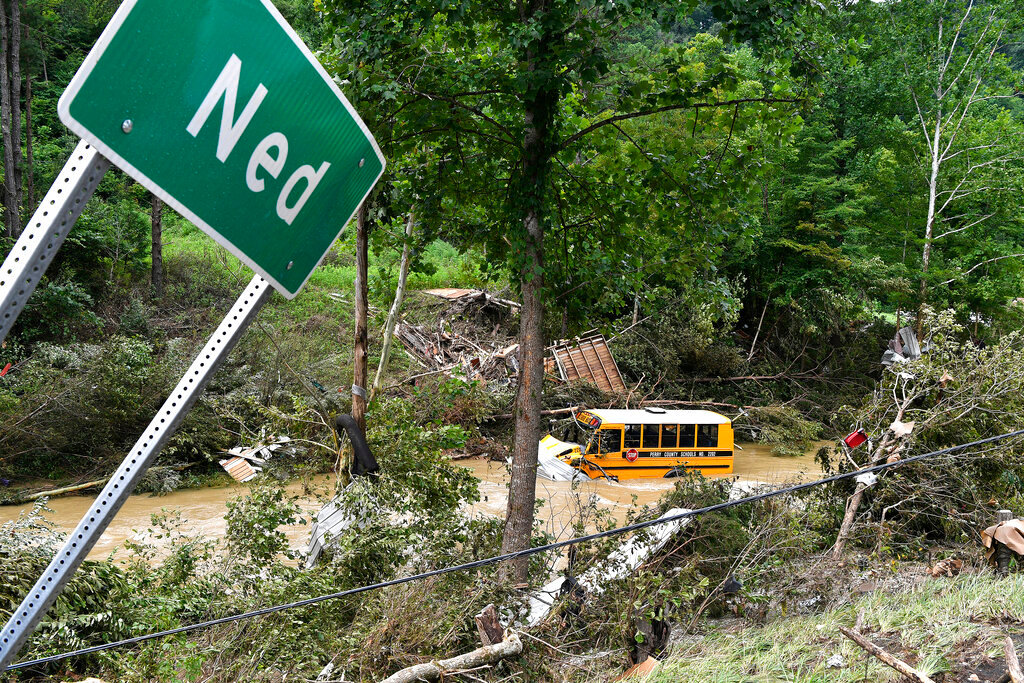 A Perry County school bus lies destroyed after being caught up in the floodwaters of Lost Cree in Ned, Ky., Friday, July 29, 2022. (AP Photo/Timothy D. Easley) 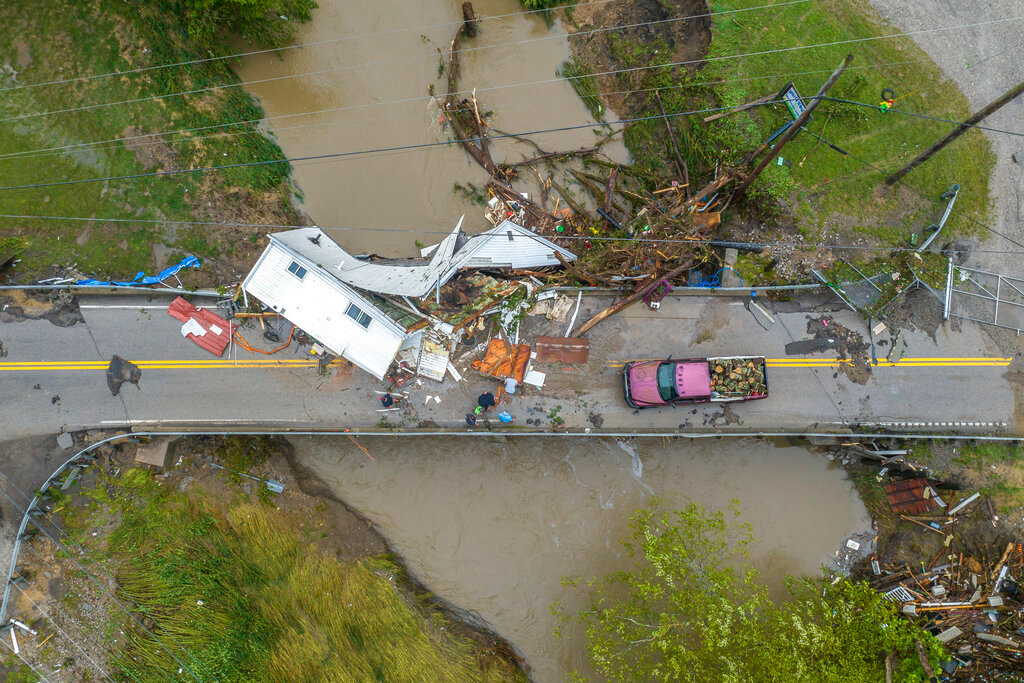 “It didn’t get in here,” he said. “I can’t explain that our town didn’t get hit like Whitesburg and some of the other areas. We have some slides and slips in the road but in Hazard it is nothing like Hindman or Whitesburg.”

For much of the affected parts of east Kentucky though, the recovery from one of the worst floods in state history will be felt for a long time. Lives have been lost, homes destroyed and dreams have vanished.

“It’s one horror story after another. People going to sleep in their mobile homes and waking up a mile down the road; kids being swept from their mommy’s arms. It’s beyond tragic.”

Reynolds was on a mission trip in Maryland when they received word about the flooding. “We had to cut that short one day and [get] back here,” he said. “One of the guys with us has a church in Knott County with three feet of water in the basement.

Reynolds said his church would be available as organizations come to help with water rescues and recovery.

“This is not a two-week event, more like six months,” he said, adding that a couple of swift water teams from Oklahoma have already been scheduled.

Paul Badgett, the East Region consultant for the Kentucky Baptist Convention and the interim pastor at Allen Baptist Church in Prestonsburg, said parts of Floyd County were affected.

“Letcher, Knott, and Perry (counties) probably got the worst of it,” he said. “With churches in east Kentucky, we were just getting over COVID. This is not what we needed it all. It’s devastating.”

Tony Brown, pastor of First Baptist Church in Whitesburg, was hauling out everything that was damaged on the first floor of the church Friday morning. Furniture, carpet, and Bibles were soaked. It was heartbreaking work, he said.

But it’s the future of the area that worries Brown the most.

“The biggest problem we’re facing is we’re already economically depressed,” he said. “Because of this, we may have a mass exodus of people. We were already on the verge of being a ghost town.”

Brown said a few of the church members were able to come and help, but so many have their own flood cleanups to do. Brown said he lives on a hill but most of the neighbors below him were covered with water up to the roof.

“They lost everything,” he said. “The neighbor next door to the church felt the water in the bed. They fled with their dog and nothing else. He said he’s never coming back.”

Brown said he’d never seen this kind of flooding in Whitesburg. Most of the time water barely comes onto the parking lot but this time, three vans were completely covered, one of them turned in a different direction.

The North Fork of the Kentucky River went up 18 feet overnight. “When it flooded, it took everybody,” he said.

Brown said he has spoken with Ron Crow, Kentucky Baptist Disaster Relief director, about setting up an operation in Whitesburg at the church. Samaritan’s Purse has also been in contact, he said. Only two grocery stores are open; the rest were flooded.

“From what I hear, Jackson is the worst of all,” he said.

Brown said he will be having a church service on Sunday, though Sunday School will be put on hold until everything is cleaned up. “We are having church, whoever can come. There will be a lot of prayer, praying for people and sharing the good news that groups are coming in to help.”

The start of the school year may have to be delayed in Whitesburg, where the elementary and middle schools were severely flooded, he said.

‘We’re doing the best we can’

Mike Caudill, pastor of First Baptist Hindman for the past 36 years, said his church wasn’t damaged by the flood but much of the town was destroyed.

“We’re doing the best we can,” he said. “All kinds of stuff is just waiting in limbo. A lot of our church members were devastated.”

He said they were delivering food boxes that could be microwaved to those who had power restored. “But we’ll be short on food before we know it,” he said.

Caudill is thankful for the resources that will come through disaster relief. He is a former disaster relief worker. His last assignment was in 2017. He welcomes them setting up operations at the church.

For now, the church has set up two 20-by-20 tents that will have cleaning supplies and water for those who need it. Caudill is expecting a pallet of Clorox to come Friday afternoon.

“It’s going to be a couple of years to recover,” he said. “I went with one of the attorneys in town to his office because there were some papers he had to get. He said, ‘Brother Mike, I’m done. I’m going to set up in another place.’ I asked him to please not leave and to pray about it.”

He said they are “ready for DR to come with boots on the ground.”

‘We are resilient people’

Fitzpatrick Baptist Pastor Tommy Reed said the northern part of Floyd County was affected, with people in Maytown and Wayland “losing everything.”

“When flash floods hit the mountains, it will usually be one area,” he said. “This one affected five or six counties. The sheer scope of it is unbelievable. Now we have to get food, cleaning supplies, and teams of help. We need to pray and give to organizations that are going to be here.”

Fitzpatrick is fixing 500 meals that will be delivered to the Garrett and Wayland areas on Saturday, Reed said. He has been traveling to communities and reaching out to pastors and business people.

“We are resilient people,” he said. “A lot of people poke fun at us, calling us hillbillies and a lot of that other stereotypical ignorance. But what you’ll see is the grittiest humility of people standing in the gap with each other. It’s an area rich in coal, rich in history, sports, and bluegrass music. The people is that beautiful thread.”

Reed promised his church will be there.

“We’ll do whatever we can to utilize our church and our people,” he said. “All I know is this: God is still good. We need to be Jesus with skin on. We need the power of human voice and human touch. It’s so important right now.”

Reed said the area was still reeling from the senseless killing of three law enforcement officers on June 30.

“It’s been a devastating time in the area,” he said.

11 of 16 deaths have come from Knott County

Jamie Reynolds, the associational mission strategist for the Three Forks Association, said the expansiveness of the flooding made it a disaster unlike any that east Kentuckians have ever witnessed.

“This type of flood is not unusual,” he said. “We have flash-flooding on a regular basis but it’s usually one or two hollers and two or three creeks. The dimensions of this are way out of line.”

Of the four counties in the Three Forks Association – Leslie, Knott, Letcher, and Perry – all were flooded, with the least damage in Leslie, he said. Of the 16 deaths reported so far, 11 were from Knott County, according to Gov. Andy Beshear.

“We live in Knott County, our (association) office is in Perry, and I pastor a church in Letcher County,” he said. “Three counties I’m personally involved in this.”

Because of that, he has stayed busy answering and returning phone calls. Reynolds said he had two legal-pad pages of people he either needed to call or text.

As for the recovery, it’s going to take time, he said. “Where do you start? That’s where DR comes in. They take that first step in the process.”

Reynolds encouraged people to get trained for Kentucky Baptist Disaster Relief work and to give to the organization.

“The only way to serve with Kentucky Disaster Relief is to be trained and be ready when the call does go out,” he said.

Kentucky Baptist Disaster Relief is organizing and preparing to receive teams from other states to help in east Kentucky, a further example of the cooperative work. The Kentucky Baptist Convention will also be providing direct help to churches and pastors through the Kentucky Cares fund.