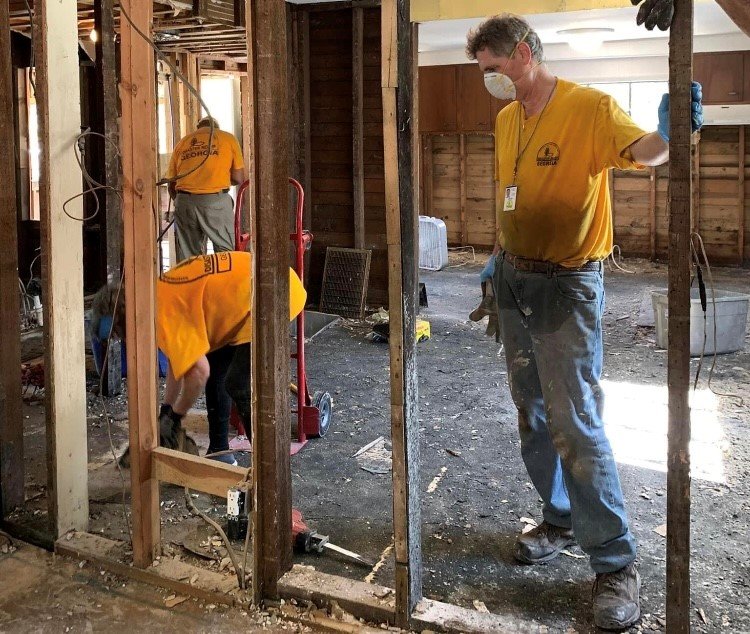 FLEMING-NEON, Ky. – In the aftermath of flash flooding that killed 37 people in the Kentucky mountains, residents here are turning to Christ.

Georgia Baptist Disaster Relief Director Dwain Carter said it’s not unusual for people to seek God amid tragic circumstances. That why, he said, teams of Disaster Relief volunteers realize their role isn’t simply to help with the clean up, but to offer spiritual guidance to survivors.

“People are lot more open to spiritual conversations after tragedies like this,” Carter said. “And a lot of times, these conversations are with people who never would darken the door of a church. This is the church coming out to them and meeting them on their own playing field, so to speak. We tell them there’s help and hope and healing in Jesus, and, in their brokenness, they realize that’s true.”

In their first week in the Kentucky mountains, Disaster Relief teams from Alabama, Georgia, Kentucky, North Carolina, South Carolina, Tennessee and Texas had reported 17 salvation decisions. The largest chunk of those – eight – was the result of gospel conversations initiated by Georgia volunteers.

“Our people love to introduce people to Jesus,” Carter said.

The section of Kentucky hardest hit by the flash flooding has been declared a federal disaster area. The Federal Emergency Management Agency has already provided more than $3.1 million in relief funds.

The flooding was triggered by a storm system that dropped up to 10 ½ inches of rain over two days on steep mountains that funneled the runoff into normally docile streams that became raging torrents, sweeping away people and homes.

Because of the steep terrain, homes in central Appalachia tend to be concentrated along narrow floodplains at the base of the mountains, which makes them susceptible to flooding.

Georgia Baptist volunteer Bob Sprinkel said a father called and asked if he, his son and his son’s friend could come to the church where Disaster Relief crews are stationed and talk.

“Anytime that you have a major event such as this, people’s hearts are broken. And a lot of times, they’re asking, ‘Why did this happen to me?’  We don’t know why. But we can point them to the Lord who can help them in their brokenness.”

Following Hurricane Ida last year, Disaster Relief crews reported at least 100 salvation decisions in Louisiana, plus another 19 others in Pennsylvania, New York and New Jersey, where flooding from remnants of the hurricane killed nearly 40 people.