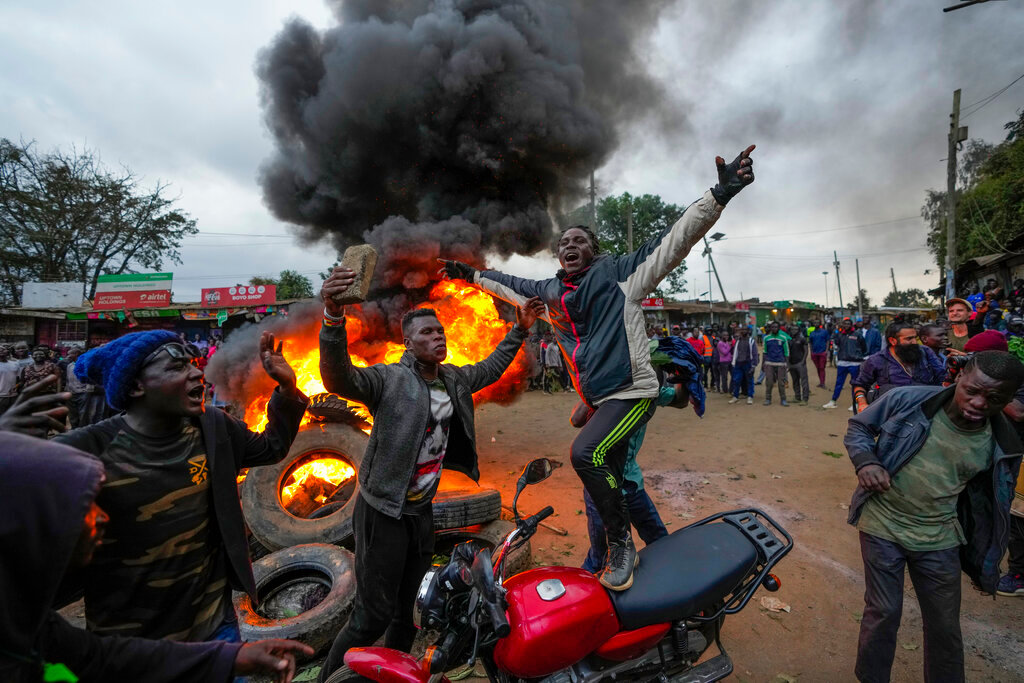 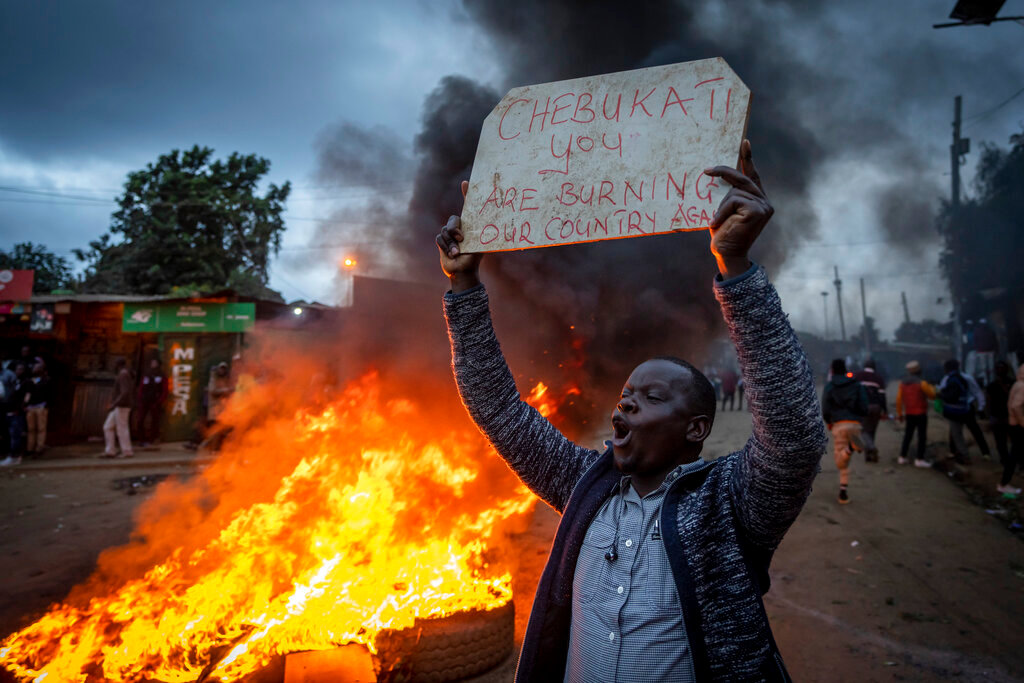 A supporter of presidential candidate Raila Odinga holds a placard referring to electoral commission chairman Wafula Chebukati, while shouting "No Raila, No Peace", next to a roadblock of burning tires in the Kibera neighborhood of Nairobi, Kenya Monday, Aug. 15, 2022. (AP Photo/Ben Curtis) 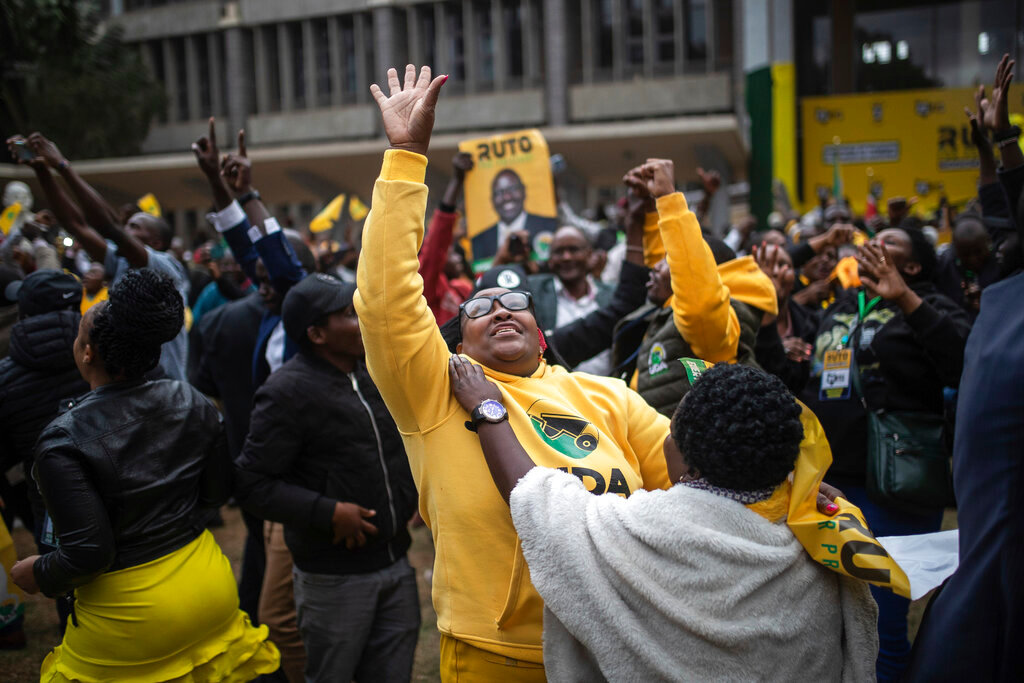 The outcome was a triumph for a candidate who shook up the East African nation's politics by appealing to struggling Kenyans' economic concerns instead of their ethnic allegiances.

Ruto received about 50.5% of the vote to nearly 49% for Odinga in last Tuesday's balloting, the chairman said. But just before the declaration, four of the seven electoral commissioners told reporters they could not support the “opaque nature” of the final steps, without giving details.

Screams and scuffles broke out in the auditorium, the lectern was tossed from the stage, and police rushed in to restore order as a choir continued to sing.

Minutes later, commission chairman Wafula Chebukati announced the official results and said the two commissioners who stayed behind with him had been injured.

Odinga's campaign alleged that unspecified “electoral offenses” were committed and that a winner was illegally declared without a quorum of commissioners.

“It is not over until it is over,” Odinga’s running mate, Martha Karua, a former justice minister, tweeted.

Crowds of people across Kenya exploded in jubilation in some places, and in anger in others. Odinga supporters shouted “No Raila, no peace!” and burned tires in the crowded Nairobi neighborhood of Kibera as night fell. Religious leaders pleaded for calm.

Odinga's campaign has seven days to file a challenge in court, extending the uncertainty in Kenya, a country of 56 million people that is seen as crucial to regional stability. The Supreme Court will have 14 days to rule.

This is likely to be the final run for Odinga, a 77-year-old longtime opposition figure who had the backing of outgoing President Uhuru Kenyatta. Kenyatta fell out with his deputy, Ruto, years ago.

Ruto told reporters that the divisions among the electoral commissioners were just a “sideshow” and “pose no threat at all to the legality of the declaration.”

“What happened this evening is an unfortunate situation, I think an attempt by our competitors to roll back what we have achieved as a country,” Ruto said. He praised an election that for many Kenyans represented a leap forward in transparency and peace, largely free from ethnic divisions that in the past played out with deadly results.

In his acceptance speech, Ruto promised a “transparent, open, democratic government” and said people who had acted against his campaign “have nothing to fear... There is no room for vengeance.”

Those were important vows from a man once mentored by former President Daniel Arap Moi, who ran Kenya as a repressive one-party state for almost a decade.

The 55-year-old Ruto portrayed himself during the campaign as the brash outsider, playing up his chicken-selling days from childhood. He told voters the election was a contest between “hustlers” from modest backgrounds and the “dynasties” of Kenyatta and Odinga, whose fathers were Kenya’s first president and vice president.

The message was popular among many Kenyans struggling with rising prices, few job opportunities and widespread corruption.

Odinga, famous for his yearslong detention during his fight for multiparty democracy decades ago and for supporting Kenya’s groundbreaking 2010 constitution, appeared to many Kenyans this time as part of the establishment.

Despite the last-minute chaos, the electoral commission improved its transparency in this election, practically inviting Kenyans to do the tallying themselves by posting online the more than 46,000 results forms from around the country. Tallies published by media organizations and others that took up the challenge echoed Monday's results.

As the people waited almost a week for the official announcement, both Odinga and Ruto appealed for peace.

Following the 2007 election, more than 1,000 people were killed after Odinga claimed victory had been stolen from him. Ruto, then Odinga’s ally, was indicted by the International Criminal Court on crimes-against-humanity charges over his role in the violence, but the case was closed amid allegations of witness intimidation.

The country's 2017 election results were overturned by the high court because of irregularities, a first in Africa. Odinga boycotted the new vote, which was won by Kenyatta.

“Leaders are there to come and go,” Richard Osiolo, a resident of the western Nyanza region, said over the weekend. “I should stay alive and see you lead, bad or good, and then I have another chance to choose another leader.”