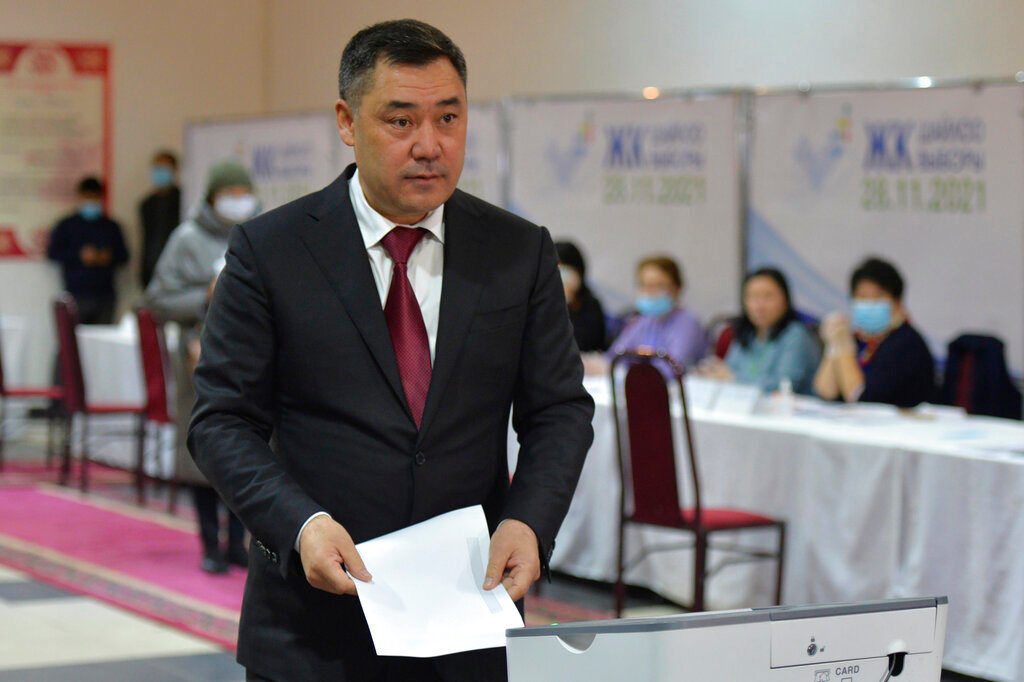 Kyrgyzstan's President Sadyr Zhaparov prepares to cast this ballot at a polling station during the parliamentary elections in Bishkek, Kyrgyzstan, Sunday, Nov. 28, 2021.Voters in Kyrgyzstan cast ballots in a parliamentary vote Sunday that comes just over a year after a forceful change of government in the ex-Soviet Central Asian nation and is expected to cement the power of President Sadyr Zhaparov. (AP Photo/Vladimir Voronin)
Vladimir Voronin
Posted Sunday, November 28, 2021 9:30 am
By VLADIMIR ISACHENKOV, Associated Press

MOSCOW (AP) — Voters in Kyrgyzstan cast ballots in a parliamentary election Sunday that comes just over a year after a forceful change of government in the ex-Soviet Central Asian nation.

President Sadyr Zhaparov, who was elected in January following protests that ousted his predecessor, expects the ballot to further cement his grip on power.

Kyrgyzstan, a nation of 6.5 million that borders China, is a member of Russia-dominated economic and security alliances. It hosts a Russian air base and depends on Moscow’s financial support.

Zhaparov was serving an 11 1/2-year sentence on charges of abducting a regional governor amid a dispute over a gold mine when he was freed by stone-hurling supporters who challenged the results of the October 2020 parliamentary election.

Last year's unrest marked the third violent ouster of the country's leader in 15 years. Like the previous uprisings that toppled presidents in 2005 and 2010, the 2020 turmoil was driven by clan rivalries that shape the country’s politics.

After his election, Zhaparov pushed for a referendum that approved a new Constitution that substantially increased presidential powers at the expense of parliament. It reduced the size of the country’s parliament from 120 to 90 seats and gave the president the power to appoint judges and heads of law enforcement agencies.

Tensions were rising in the country ahead of the vote, with Zhaparov accusing his political foes of plotting a mutiny and warning that those who try to stage post-election riots would face prosecution.

“Some politicians are planning an armed coup," Zhaparov said. "We know them all, and after the vote we will take harsh measures against them. People who would take to the streets without a reason will face a severe punishment.”

On Friday, the national security agency said it had foiled a coup plot involving several “destructively-minded” parliament members and former senior officials who were accused of recruiting about 1,000 supporters and stockpiling weapons and drugs to stage post-election riots.

On Saturday, the Kyrgyz authorities announced the detention of four representatives of political parties on charges of trying to buy votes.