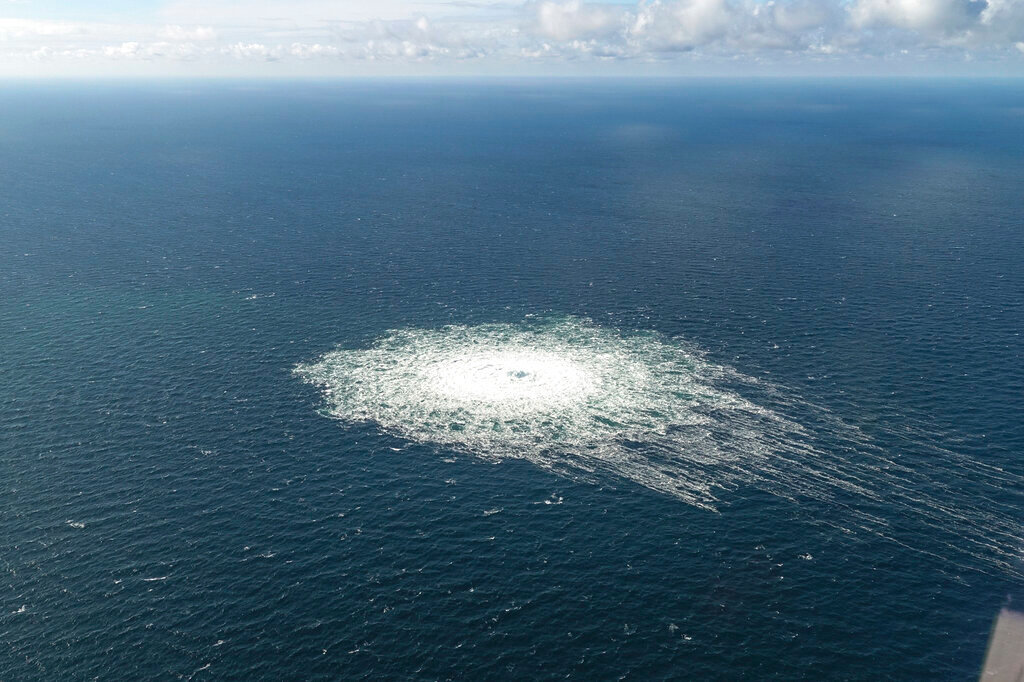 A large disturbance in the sea can be observed off the coast of the Danish island of Bornholm Tuesday, Sept. 27, 2022, following a series of unusual leaks on two natural gas pipelines running from Russia under the Baltic Sea to Germany have triggered concerns about possible sabotage. (Danish Defence Command via AP) 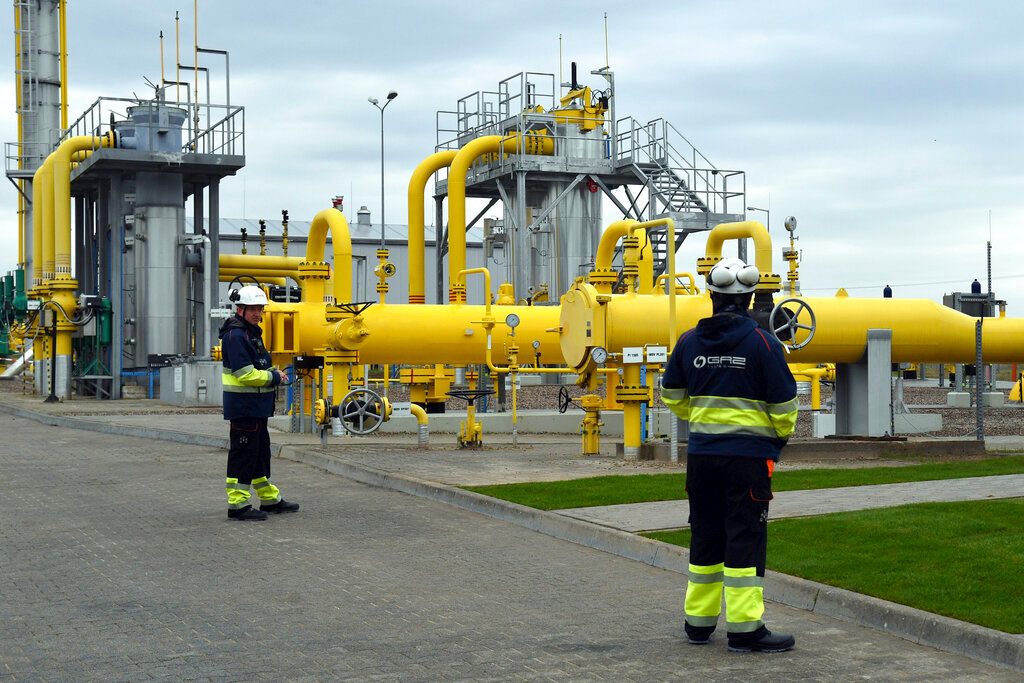 Workers stand near the pipelines during an opening ceremony of the Baltic Pipe in Budno, Poland, Tuesday, Sept. 27, 2022. (AP Photo) 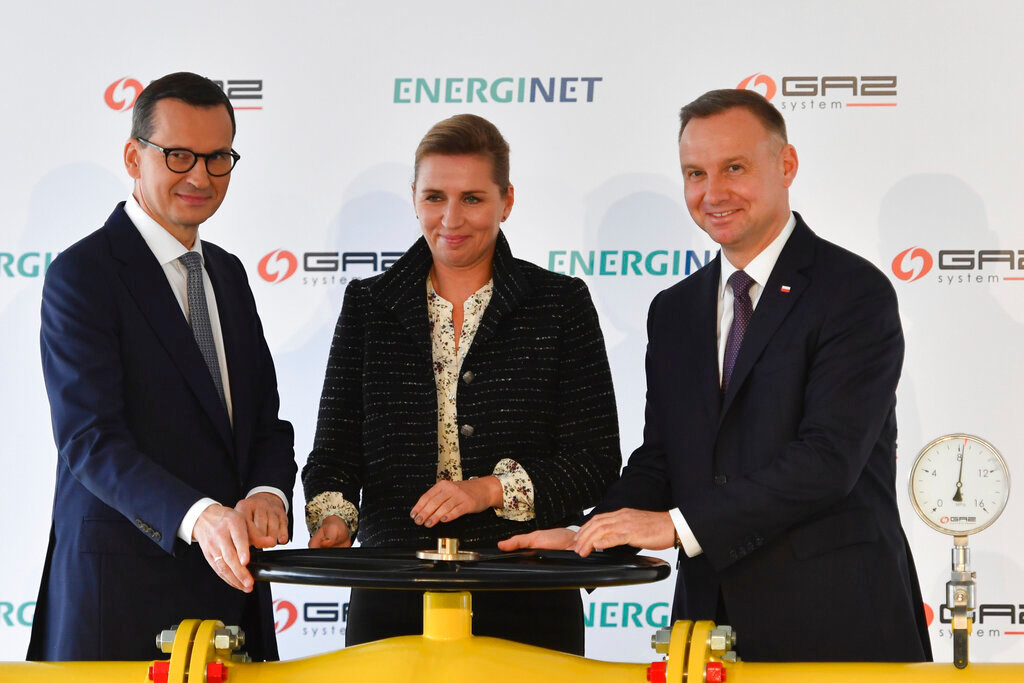 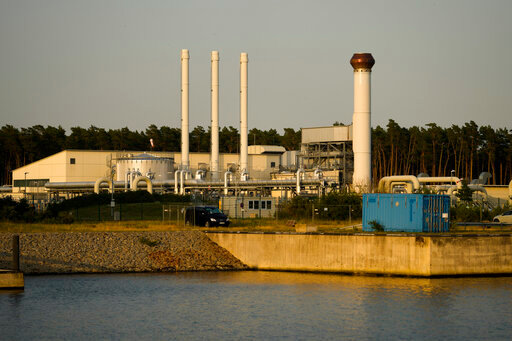 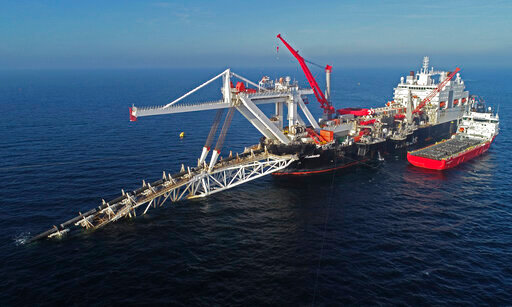 A ship works in the Baltic Sea on the natural gas pipeline Nord Stream 2 from Russia to Germany, on Nov. 11, 2018. (Bernd Wuestneck/dpa via AP, File)
Previous Next
Posted Tuesday, September 27, 2022 9:42 am
By MONIKA SCISLOWSKA and JAN M. OLSEN, Associated Press

WARSAW, Poland (AP) — A series of unusual leaks on two natural gas pipelines running from Russia under the Baltic Sea to Germany triggered concerns about possible sabotage Tuesday, overshadowing the inauguration of a long-awaited pipeline in Poland that will bring Norwegian gas to Europe in efforts to bolster energy independence from Moscow.

Bjorn Lund, a seismologist with Uppsala University who is part of Sweden’s national seismic network, said the first explosion was recorded in the early hours southeast of the Danish island of Bornholm. The latter and stronger blast that night was northeast of the island and equivalent to a magnitude-2.3 earthquake.

"We know very well what an underwater blast looks like. And so in this case, there’s no doubt this is not an earthquake,” Lund said.

Polish Prime Minister Mateusz Morawiecki called the events “an act of sabotage," while Danish Prime Minister Mette Frederiksen said she could not rule it out after three leaks were detected over the past day on the Nord Stream 1 and 2 pipelines, which are filled with gas but not delivering the fuel to Europe. An energy standoff over Russia's war in Ukraine halted flows on Nord Stream 1 and prevented them from ever starting in the parallel Nord Stream 2.

Frederiksen, Morawiecki, and Polish President Andrzej Duda symbolically opened a valve of a yellow pipe belonging to the Baltic Pipe, a new system that will bring Norway's gas across Denmark and the Baltic Sea to Poland.

"The era of Russian domination in the gas sphere is coming to an end," Morawiecki declared. “An era that was marked by blackmail, threats and extortion.”

No official presented evidence of what caused the Nord Stream problems, but with distrust of Russia running high, some feared Moscow sabotaged its own infrastructure out of spite or to warn that pipelines are vulnerable to attack. The leaks off the coast of Denmark and Sweden raised the stakes on whether energy infrastructure in European waters was being targeted and leading to a small bump in natural gas prices.

“We can clearly see that this is an act of sabotage, an act that probably means a next step of escalation in the situation that we are dealing with in Ukraine,” Morawiecki said.

Anders Puck Nielsen, a researcher with the Center for Maritime Operations at the Royal Danish Defence College, said the timing of the leaks was “conspicuous” given the ceremony for the Baltic Pipe. He said perhaps someone sought “to send a signal that something could happen to the Norwegian gas.”

“The arrow points in the direction of Russia,” Puck Nielsen said. “No one in the West is interested in having any kind of instability in the energy market.”

The extent of the damage means the Nord Stream pipelines are unlikely to be able to carry any gas to Europe this winter even if there was political will to bring them online, analysts at the Eurasia Group said.

“Depending on the scale of the damage, the leaks could even mean a permanent closure of both lines,” analysts Henning Gloystein and Jason Bush wrote.

They noted that undersea pipelines are designed in a way that they are not accidentally damaged and leaks are rare.

“Leaks of this size are a severe safety and environmental hazard, especially should Russia not stop pumping gas into the system,” the analysts said.

Puck Nielsen said of possible sabotage that “technically speaking, this is not difficult. It just requires a boat. It requires some divers that know how to handle explosive devices.”

“But I think if we look at who would actually benefit from disturbances, more chaos on the gas market in Europe, I think there’s basically only one actor right now that actually benefits from more uncertainty, and that is Russia," he said.

Asked if the leaks may have been caused by sabotage, Kremlin spokesman Dmitry Peskov said “no version could be excluded.”

“This is an unprecedented situation that requires an urgent investigation. We are extremely worried by this news,” he said in a conference call with reporters.

The Danish and Swedish maritime authorities issued navigation warnings after the leaks in the pipelines were detected northeast and southeast of the Danish island of Bornholm.

Denmark established a prohibited area to ensure that ships do not go near the leaks. Ships may lose buoyancy, and there may also be a risk of ignition above the water and in the air, authorities said.

The Nord Stream pipelines have been at the center of an energy clash between Europe and Russia since the invasion of Ukraine in late February. Plunging Russian gas supplies have caused prices to soar, pressuring governments to help ease the pain of sky-high energy bills for households and businesses as winter nears. The crisis also has raised fears of rationing and recession.

European countries have struggled to find other supplies of gas, which heats homes, generates electricity and runs factories. Poland, for example, was on track to free itself of Russian gas after working for years to secure other sources, including liquefied natural gas, or LNG, from the United States and Middle East. Germany, in contrast, is only now racing to build LNG terminals.

The Baltic Pipe is a prominent element in the European Union's search for energy security and is to start bringing Norwegian gas through Denmark and along the Baltic Sea to Poland on Oct. 1.

Simone Tagliapietra, an energy expert with the Bruegel think tank in Brussels, said the leaks “can’t be a coincidence” and speculated they could have been caused by Russian sabotage or anti-Russian sabotage.

One possibility is Russia signaling it “is breaking forever with Western Europe and Germany” as Poland inaugurates its pipeline with Norway, he said.

“In any case, this is a stark reminder of the exposure to risk of Europe’s gas infrastructure,” Tagliapietra said.

Polish energy expert Andrzej Sikora said he has been warning of the possibility of attacks on pipeline infrastructure since the construction of Nord Stream 1 in 2010. The significant drop in pressure caused by the leaks was clearly not the result of “a bad weld,” said Sikora, head of the Energy Studies Institute think tank.

He has been urging steps to ensure the security of the Baltic Pipe, which at one point crosses paths with both Nord Stream pipelines.