Bryson Arthur, a student at Faceville Baptist, helps put together bags for the church's monthly food bank. Community outreach has become a hallmark of the church located just north of the Florida state line. FACEVILLE BC/Special

BAINBRIDGE — You wouldn't blame the members of Faceville Baptist Church if they had an identity issue. Located in Georgia, the congregation sits less than four miles from Florida. It has a Bainbridge address and Google Maps even places them on the southwest edge of town, but is actually 12 miles south on highway 97. 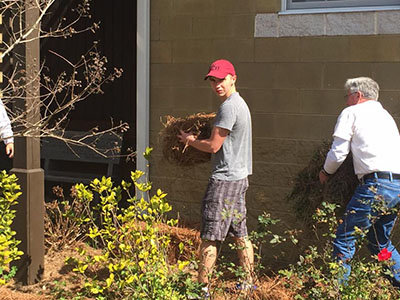 Logan Spooner helps distribute straw as part of a beautification project alongside Mark Barber, right, who serves on the youth council. Students from Faceville will travel to New Orleans this summer to work alongside NOBTS seminarians in backyard Bible clubs. FACEVILLE BC/Special

What's more, the church that averages around 100 on Sunday mornings tends to do much bigger things than that number would imply. So yeah, Faceville Baptist may have an identity problem in that its members go bigger than you'd expect.

Most of that materializes in its commitment to community missions.

"The church has always emphasized it," says Pastor Ernie Jones, who joined the congregation about a year-and-a-half ago after serving at Westside Baptist in Valdosta. "They have a big heart for Jesus that spills over to helping people.

"Sharing Christ includes more than just using your mouth," he continues. "You have to show Jesus if you want to share Jesus."

Talking precipitates action. And, the former remains pointless without the latter. For action to occur, someone serves as the leader. 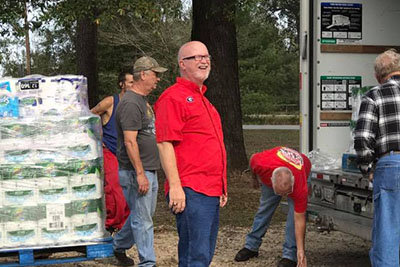 Jones can't say enough about the church's lay leadership in making both talk and action realities.

Kim Jeter grew up in the church her dad, Ken Gainous, served as pastor for nearly 29 years. Today she leads students in outreach efforts such as local beautification projects and the Faceville Food Bank.

"She has a lot of energy and really has a heart for this church and community," remarks Jones. "She's awesome."

Similarly, ladies ministry director Hallie Prince finds ways to bless others through a sewing ministry that provides clothes to children in Appalachia. "You need these leaders to have a successful ministry. But, you also need people willing to work," Jones adds. 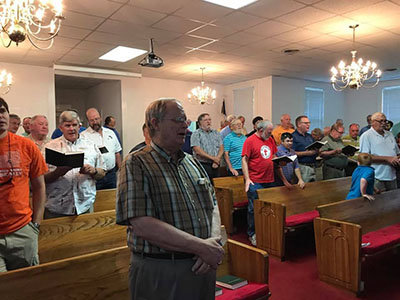 Fellowship occurs at these events, but so does sharing about how God has shaped lives. Jones credits the work of associational missionary Ken Cloud in making those gatherings consistent and beneficial.

"We have a speaker and some music. Then, we talk about different events churches can work together on," says, Jones.

Every Thanksgiving and Christmas Faceville members join in on distributing turkeys to needy families. Food distribution isn't seasonal, though. Throughout the year students and others facilitate the Faceville Food Bank, overseen by Ronnie Spooner. This summer students will go to New Orleans Baptist Theological Seminary, where they'll work with seminary students in conducting backyard Bible clubs. 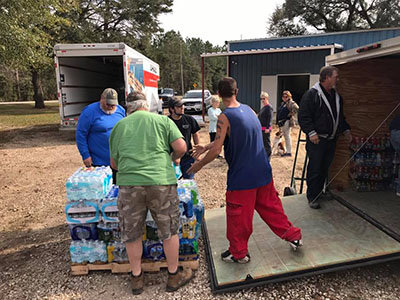 A picture of the Gospel

Operated out of Faceville Baptist, the food bank is just one of many opportunities for the congregation to make an impact. "This is the biggest-giving church I've ever seen," Jones exclaims. "From the food bank to rebuilding homes to pressure washing houses, everyone gets involved."

Those opportunities, as he sees it, serve a dual purpose.

They show young people the Gospel isn't just reading and listening. It's sweat and effort. It requires a step, and maybe that step is taken holding a sack of groceries for someone who didn't know where supper was going to come from.

"We want to show that being a Christian is more than words," explains Jones. "It's actions. Whether we're putting a roof on a house or fixing a porch, there's more to being a child of God."