Lester Bray, in blue shirt, and friends display some of the produce grown through plasticulture, an efficient way to provide for the food banks in Fayette County. LESTER BRAY/Special
Posted Tuesday, May 30, 2017 11:06 am
Gerald Harris

Lester Bray, in blue shirt, and friends display some of the produce grown through plasticulture, an efficient way to provide for the food banks in Fayette County. LESTER BRAY/Special

CORRECTION: An earlier version of this story stated in the final section that a man grew his plasticulture garden from one acre, when it should've read five acres. The Index regrets the error.

FAYETTEVILLE – Lester Bray, a member of New Hope Baptist Church, is determined to leave a legacy of faithfulness, fruitfulness, and financial security to those who will heed his example and counsel.

Bray is the spokesman on the church’s website in a video titled “Boundless Faith,” in which he chronicles the history of the church from 1900 to the present. He has served as a deacon, a Sunday School teacher, and church treasurer. After the church was able to secure a financial administrator, Bray continued to serve on the finance committee for 30 years.

He explained, “The Bray family’s roots are deep here at New Hope."

Pastor Rhys Stenner said, “Lester Bray is a New Hope legend and a Delta hero. He has been a member of New Hope for more than 80 years – a story in itself. He has just published his first book at age 88."

A gift through good soil

“However, in 2008 Bray planned and orchestrated the New Hope garden on a spare acre of good soil," Stenner added. "The one acre soon became two acres, producing 20,000 pounds of vegetables per acre for local food banks and providing for the needs of families all over the county. Over the past few years eight additional satellite gardens have been developed producing 300,000 pounds of food each year – mostly for benevolent purposes.” 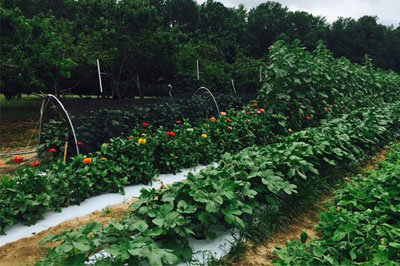 This lush, green garden is flourishing through plasticulture, a method of farming that maximizes the use of limited areas of gardening space. LESTER BRAY/Index

A visit to the Bray home on Hickory Road near New Hope Baptist Church proved to be an extraordinary blessing. In his 88 years he has never lived more than two miles from the church.

Professionally, Bray has spent most of his life around airplanes. He was in the U.S. Air Force from 1950-1954 and was involved in the Korean Conflict during his young adult years.

He said, “I was too young to serve in World War II, but in the Korean War I was a crew chief on the F-86 Sabre Jet and later became a hanger chief. We had 90 planes at our airfield and each one flew three or four missions a day, so we were busy all the time.”

A lifetime around airplanes

The pilots of the U.S. Air Force were heavily outnumbered and flew an airplane that in many ways was inferior to the MiG-15s flown by their Communist adversaries. Nor could they pursue the MiGs into their sanctuaries beyond the Yalu River. Nonetheless, they built up an impressive combat record. And, Bray had a hand in making sure those planes were combat ready.

After his stint with the Air Force, Bray worked for Delta Airlines for 41 years. Soon thereafter he became a consultant for American aerospace manufacturer Pratt & Whitney.

In 2008 Bray started working with the Fayette County chapter of Plant-a-Row for the Hungry. Through his interactions with that group he was inspired – and encouraged – to finally put to paper his vast knowledge of farming in the Georgia Piedmont. 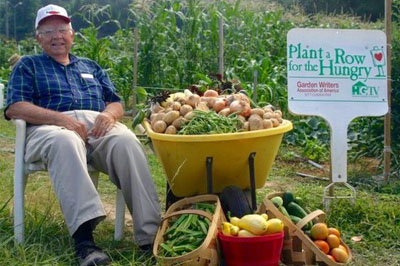 Lester Bray is devoted to feeding the hungry in the southwest Atlanta area. Here he is displaying potatoes, green beans, okra, squash, tomatoes, cucumbers, and onions produced in abundance on a small plot of ground through plasticulture. LESTER BRAY/Special

His book, Plasticulture: Faming for Everybody, is a marvelous guide to producing high yields with modest resources. Plasticulture is the combination of two words: plastics and agriculture. In short, plastics make agriculture more productive and efficient by cutting costs and saving time.

By using plastics in agriculture, farmers are also able to conserve precious natural resources such as water, nutrients, fossil fuels, and many forms of energy, especially sunlight. In some cases, plastic can be used to limit sunlight and retain moisture, especially in arid regions. Plasticulture also reduces competition from invasive weeds and insects.

Bray starts his book by stating, “Our Creator provided a plan for feeding all living creatures. He also gave us the ability to adapt and create new methods of producing food as we experience changes in our world.

“Across our nation, growers of food crops are faced with the prospect of providing more food with dwindling resources – primarily water and good, fertile land. We are being told that the world’s food needs will double by the year 2050. Unfortunately, our current system of growing crops on large farms in centralized areas of the nation and transporting those crops thousands of miles to reach buyers is both inefficient and wasteful. It also requires enormous amounts of fuel and adds to the carbon footprint.”

Bray added, “Plasticulture farming, however, offers an opportunity to transcend these problems.” Bray insists that Plasticulture can be used to feed the hungry and also provide a significant income for many citizens if properly implemented.

Walter Reeves, the Georgia gardner who grew up on a small farm in Fayette County and who hosts the “Lawn and Garden Show” on WSB Radio, has enthusiastically endorsed Bray’s book and commends his good work in plasticulture. 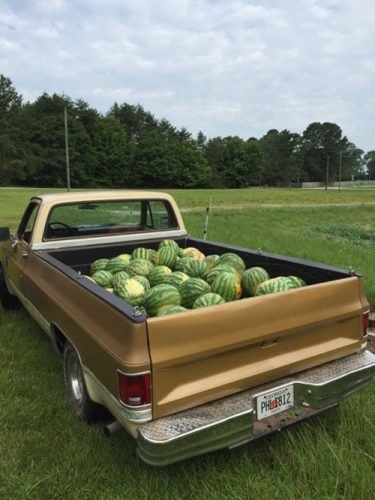 Watermelons grow in abundance through plasticulture. A truckload is ready to go to one of the local food banks to make some underprivileged folks very happy. LESTER BRAY/Special

Bray told of one man who has a plasticulture garden of five acres to grow produce and 350 people signed up to get his Community Sponsored Agriculture (CSA) boxes each week. The box is about a half-bushel-sized box geared toward a family of two adults and two small children. In the box there will be about 8-10 different produce items depending on what is in season at the time.

The people pay $28 per week for the CSA boxes during the twelve weeks of the summer. The gross income for the farmer amounts to $117,600 for the summer season of selling his produce – a nifty little income coming from one acre of land.

In 2010 Pearson Farms in Fort Valley volunteered to join the effort to Plant-A-Row for the Hungry (PAR) and donated 35,000 pounds of peaches to the distribution each year for the past seven years.

Bray is interested in helping people provide for those who are hungry and he also wants to help people find an additional income stream to meet their financial obligations, pay for a son or daughter’s college education, or become more able to support Christian ministries.

It is obvious that Lester Bray will leave a legacy of faith, fruitfulness, and financial security for those who will heed his example and counsel.