Lifeway survey: 'Tis the season for church pews to fill up 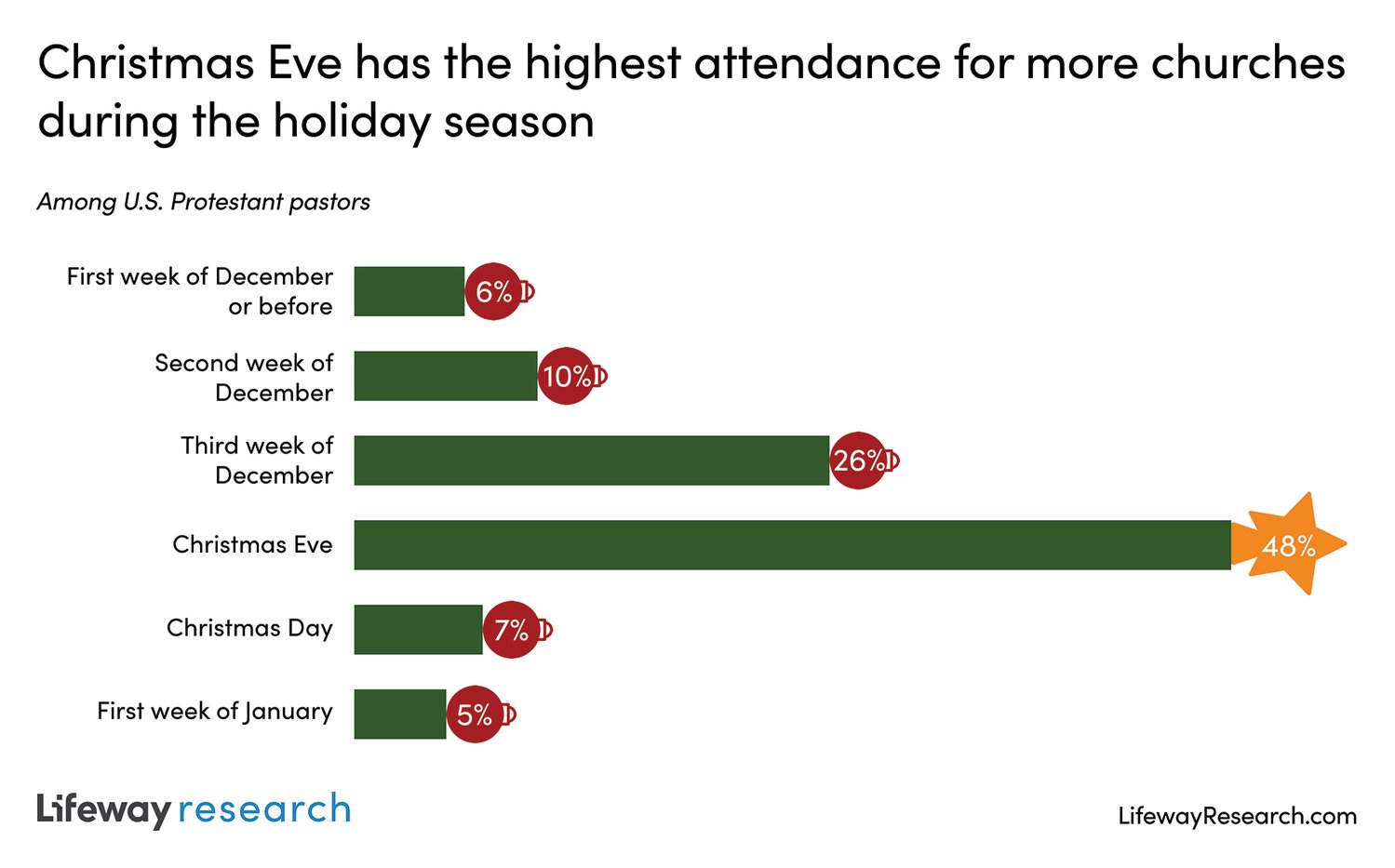 NASHVILLE, Tenn. — The closer it gets to Christmas, the more likely it is church pews will be filled.

Half of U.S. Protestant pastors (48%) say a Christmas Eve service is their churches’ largest event during the holiday season, according to a Lifeway Research study. The frequency of the highest attendance events builds up to Christmas Eve and then tapers off into January.

“Christians have many different Christmas traditions, and so do their churches,” said Scott McConnell, executive director of Lifeway Research. “Family and church traditions are most likely to coincide for Christmas Eve services, but many evangelical churches see the highest holiday attendance earlier in December.”

Few pastors point to an event the first week of December or earlier (6%) or a service during the second week (10%) as their most well-attended. Around a quarter (26%) say an event during the third week of the month is top.

While it may not be true for most congregations, early December is the high-water mark for Christmas season attendance at Harrisburg Baptist Church in Tupelo, Mississippi. Senior pastor Rob Armstrong said attendance starts off strong in December, with their Sunday services the first two weeks of the month being their most attended events. “Excitement about the Christmas season feeds into the higher attendance in the first few weeks of the month,” he said.

The Christmas season is a prime season for church attendance. Traditionally, Christmas is the second highest attendance time of the year behind only Easter, according to a 2012 Lifeway Research study. In 2014, more than 3 in 5 Americans (63%) said Christmas activities should include a visit to a church service, according to Lifeway Research. In 2015, Lifeway Research found a similar percentage (61%) said they typically attend church during Christmastime. Even among those who don’t attend church this time of the year, 57% said they would be likely to attend if someone they knew asked them.

Denominationally, some churches fare better earlier in the month, while others see their crowds grow as the season wears on.

Pentecostal (18%) and Baptist (15%) pastors are more likely than Methodist (3%), Restorationist Movement (2%) and Lutheran (1%) pastors to have their highest attendance during the second week of December.

For the third week, Pentecostals (45%), Restorationist Movement pastors (37%) and Baptists (35%) are more likely than Presbyterian/Reformed (20%), non-denominational (17%), Methodist (13%) and Lutheran (7%) pastors to have the largest crowd of the season.

Lutherans (84%) are the most likely to say their high-attendance event this season happens on Christmas Eve.

Restorationist Movement churches are unique in that 21% say their most popular service is an event the first week of January. John Dobbs, pastor of Forsythe Church of Christ in Monroe, Louisiana, says there is a resistance to celebrating Christmas among the autonomous Christian and Church of Christ congregations. “That is based on the truth that we are never actually told in Scripture to celebrate the birth of Christ,” he said. Dobbs also noted that pastors and members at Church of Christ congregations have diverse opinions on how to approach the Christmas holiday.

While many Orthodox Christians celebrate Christmas in January, the first part of the year also provides a natural time of reflection and focus. “Given the aversion to holidays among many traditional and conservative churches, a day of renewal and beginning again becomes a day of emphasis and engagement,” Dobbs said.

At Harrisburg Baptist, attendance on the Sundays closest to Christmas and New Year’s Day are some of the lowest attended of the season, according to Armstrong, as many are out of town visiting family. Despite what may be smaller crowds, he still believes churches should gather on those days. “Churches should have worship on Christmas Day or any Sunday close to it,” he said. “It’s OK to have low attendance on those days because people travel.”

“Pastors are always eager to see people attending church services, and the Christmas season is one time of year they get to see most of their congregation as well as visitors,” McConnell said. “But the nature of those traditions varies by church with some seeing attendance culminating in a special Christmas Eve service, others a Sunday morning service and others a special musical experience.”