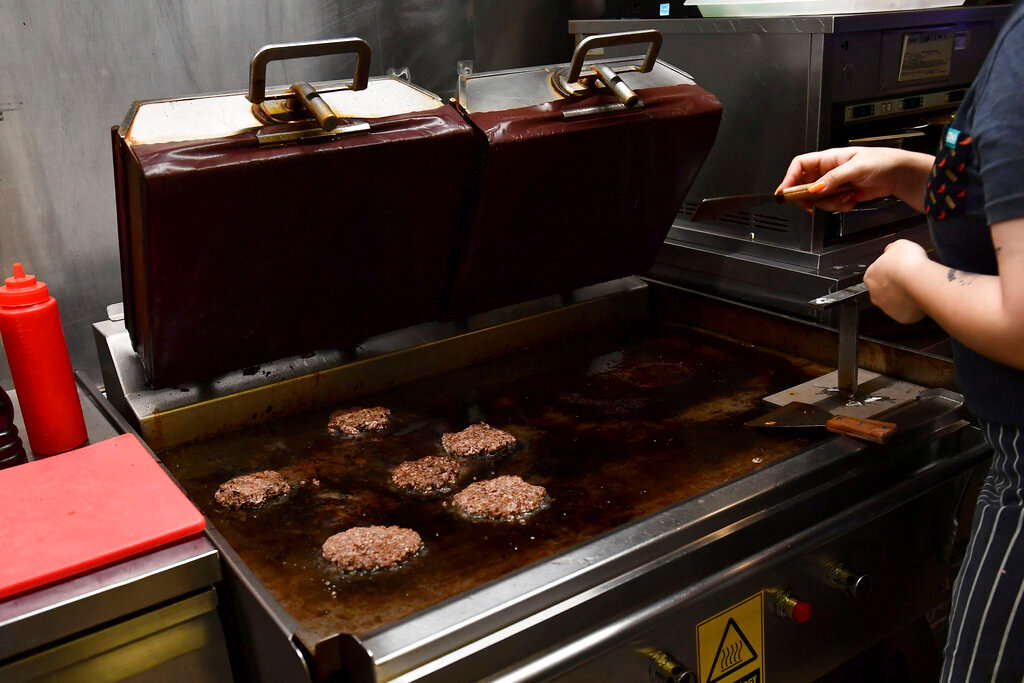 A worker cooks burgers at Zing Burger store in Budapest, Hungary, Monday, Sept. 12, 2022. Richard Kovacs, a business development manager for the Hungarian burger chain, said some of the chain's 15 stores have seen a 750% increase in electricity bills since the beginning of the year. (AP Photo/Anna Szilagyi) 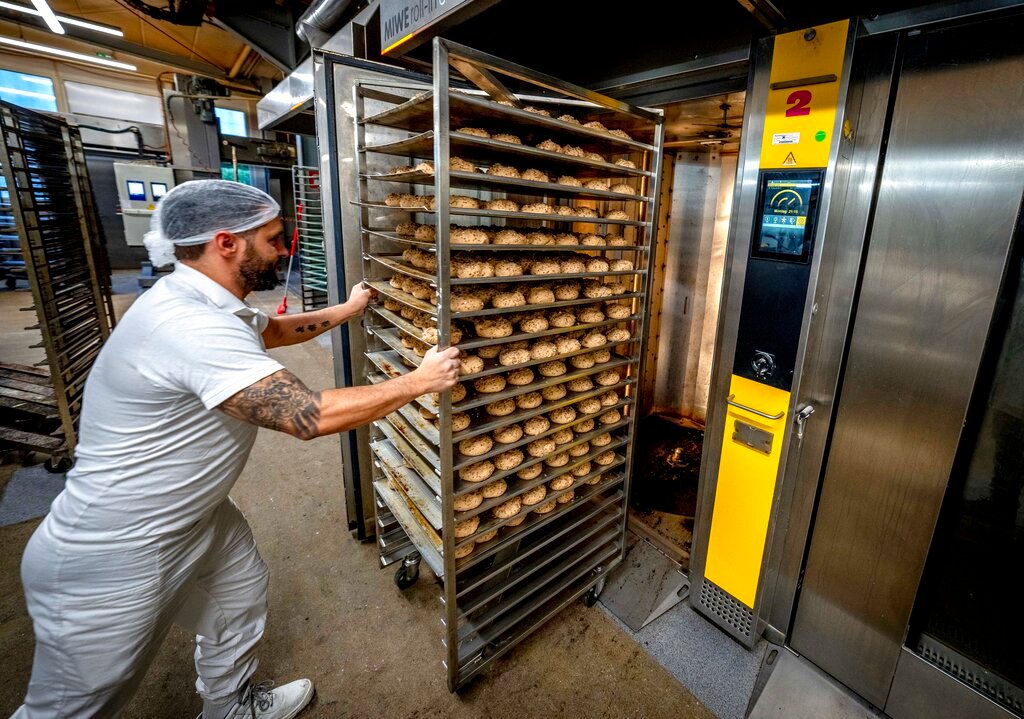 An employee pushes rolls into one of the gas-heated ovens in a production facility in Neu Isenburg, Germany, Monday, Sept. 19, 2022. Andreas Schmitt, head of the local bakers' guild, said some small bakeries are contemplating giving up due to the energy crisis. (AP Photo/Michael Probst) 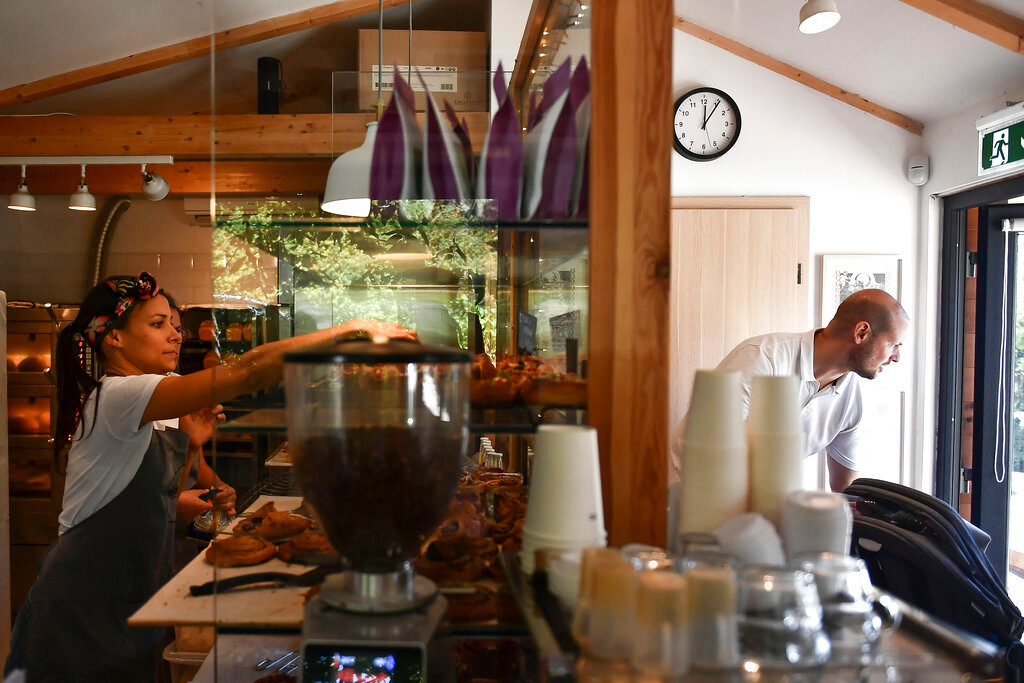 Bakery owner Eszter Roboz prepares some pastries in Babushka Artisanal Bakery in Budapest, Hungary, Friday, Sept. 9, 2022. The gourmet bakery has raised its prices by 10% to keep up with rapidly rising costs of energy and raw materials. (AP Photo/Anna Szilagyi)
Previous Next
Posted Monday, September 26, 2022 10:20 am
By The Associated Press

FRANKFURT, Germany (AP) — As Europe heads into winter in the throes of an energy crisis, offices are getting chillier. Statues and historic buildings are going dark. Bakers who can't afford to heat their ovens are talking about giving up, while fruit and vegetable growers face letting greenhouses stand idle.

In poorer eastern Europe, people are stocking up on firewood, while in wealthier Germany, the wait for an energy-saving heat pump can take half a year. And businesses don't know how much more they can cut back.

“We can’t turn off the lights and make our guests sit in the dark,” said Richard Kovacs, business development manager for Hungarian burger chain Zing Burger. The restaurants already run the grills no more than necessary and use motion detectors to turn off lights in storage, with some stores facing a 750% increase in electricity bills since the beginning of the year.

With costs high and energy supplies tight, Europe is rolling out relief programs and plans to shake up electricity and natural gas markets as it prepares for rising energy use this winter. The question is whether it will be enough to avoid government-imposed rationing and rolling blackouts after Russia cut back natural gas needed to heat homes, run factories, and generate electricity to a tenth of what it was before invading Ukraine.

Europe's dependence on Russian energy has turned the war into an energy and economic crisis, with prices rising to record highs in recent months and fluctuating wildly.

In response, governments have worked hard to find new supplies and conserve energy, with gas storage facilities now 86% full ahead of the winter heating season — beating the goal of 80% by November. They have committed to lower gas use by 15%, meaning the Eiffel Tower will plunge into darkness over an hour earlier than normal while shops and buildings shut off lights at night or lower thermostats.

Europe's ability to get through the winter may ultimately depend on how cold it is and what happens in China. Shutdowns aimed at halting the spread of COVID-19 have idled large parts of China's economy and meant less competition for scarce energy supplies.

German Chancellor Olaf Scholz said this month that early preparations mean Europe’s biggest economy is “now in a position in which we can go bravely and courageously into this winter, in which our country will withstand this.”

“No one could have said that three, four, five months ago, or at the beginning of this year,” he added.

Even if there is gas this winter, high prices already are pushing people and businesses to use less and forcing some energy-intensive factories like glassmakers to close.

It's a decision also facing fruit and vegetable growers in the Netherlands who are key to Europe's winter food supply: shutter greenhouses or take a loss after costs skyrocketed for gas heating and electric light.

Bosch Growers, which grows green peppers and blackberries, has put up extra insulation, idled one greenhouse, and experimented with lower temperatures. The cost? Smaller yields, blackberries taking longer to ripen, and potentially operating in the red to maintain customer relationships even at lower volumes.

"We want to stay on the market, not to ruin the reputation that we have developed over the years," said Wouter van den Bosch, the sixth generation of his family to help run the business. “We are in survival mode.”

Kovacs, grower van den Bosch and bakers like Andreas Schmitt in Frankfurt, Germany, are facing the hard reality that conservation only goes so far.

Schmitt is heating fewer ovens at his 25 Cafe Ernst bakeries, running them longer to spare startup energy, narrowing his pastry selection to ensure ovens run full, and storing less dough to cut refrigeration costs. That might save 5-10% off an energy bill that is set to rise from 300,000 euros per year, to 1.1 million next year.

“It's not going to shift the world," he said. The bulk of his costs is “the energy required to get dough to bread, and that is a given quantity of energy.”

Schmitt, head of the local bakers' guild, said some small bakeries are contemplating giving up. Government help will be key in the short term, he said, while a longer-term solution involves reforming energy markets themselves.

Europe is targeting both, though the spending required may be unsustainable. Nations have allocated 500 billion euros to ease high utility bills since September 2021, according to an analysis from the Bruegel think tank in Brussels, and they are bailing out utilities that can’t afford to buy gas to fulfill their contracts.

Governments have lined up additional gas supply from pipelines running to Norway and Azerbaijan and ramped up their purchase of expensive liquefied natural gas that comes by ship, largely from the U.S.

At the same time, the EU is weighing drastic interventions like taxing energy companies' windfall profits and revamping electricity markets so natural gas costs play less of a role in determining power prices.

Governments have dismissed Russia as an energy supplier but President Vladimir Putin still has leverage, analysts say. Some Russian gas is still flowing and a hard winter could undermine public support for Ukraine in some countries. There have already been protests in places like Czechia and Belgium.

In Bulgaria, the poorest of the EU’s 27 members, surging energy costs are forcing families to cut extra spending ahead of winter to ensure there is enough money to buy food and medicine.

More than a quarter of Bulgaria's 7 million people can’t afford to heat their homes, according to EU statistics office Eurostat, the highest in the 27-nation bloc due to poorly insulated buildings and low incomes. Nearly half of households use firewood in winter as the cheapest and most accessible fuel, but rising demand and galloping inflation have driven prices above last year’s levels.

The gourmet Babushka Artisanal Bakery in an affluent district of Budapest has had to raise prices by 10%. The bakery used less air conditioning despite Hungary's hottest summer on record and is ensuring the ovens don't run without bread inside.

While it has enough traffic to stay open for now, further jumps in energy costs could threaten its viability, owner Eszter Roboz said.

“A twofold increase in energy costs still fits into the operation of our business and into our calculations," she said. “But in the case of a three- to fourfold increase, we will really need to think about whether we can continue this.”